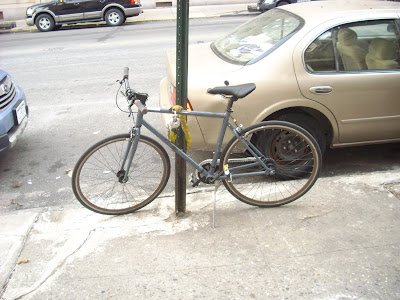 Fauxie's (Faux Fixie) seem to be the rage these days in the City and here is a perfect example of one from Origin 8.  The Cutler, is touted as a new breed of bicycle for the urban jungle but it's not marketed as a fixed gear, although this bike appears to have a flip flop hub.  On the Cutler page, it's not specifically stated that it has a flip flop but it looks like it has one.  The component description states that the rear wheel is for a free wheel but the hub description is cut off so it's hard to tell.

The cockpit is pretty simple and it uses in-line Promax levers which seem kind of cheezy.  I think a BMX lever or an Avid would be better suited but seeing that the brakes are Promax, Origin 8 went the bargain basement route.  If you recall, the Mongoose Deception uses Lee Chi brakes, which are also made by Promax.  I guess that's what you get for an under $300 single speed commuter. 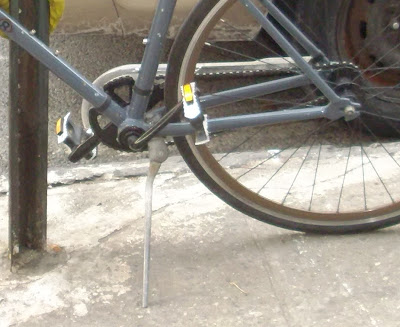 The kick stand and chain guard I get, it's an urban single speed, but one piece cranks?  THE HORROR!
at 6:18 AM

hey, i have a one piece crank on my 1991 raleigh mustang based fauxie, looks nice and sleek and it's mated to a coaster brake off a schwinn.