Cold enough for the snivel gear! 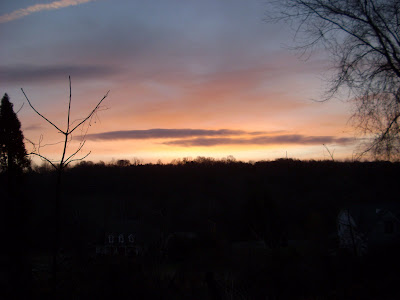 Commute #22 started out a bit on the nippy side.  Below 32 degrees means breaking out the heavy duty snivel gear which includes the Lobsters, overboots, fleece balaclava, and my blaze orange windstopper fleece hunting jacket (only I don't hunt).  Nothing really exciting on the commute to speak about except for the used needle seen on Hawleyville Road in Newtown (nice!) and almost getting hit by an inattentive driver in an intersection.
A major irony occurred this morning at the intersection of Walnut Hill Rd and Hawleyville Rd in Bethel, CT.  Coming to a stop at the intersection I waved the car to the that got to the intersection at the same time I did.  I figured he would go anyway because he looked young and impatient, anyway.  So, it's my turn and I am almost completely into the opposite lane of traffic when the guy behind impatient youth starts to pull out behind him.  Yikes!  I yell to the driver and immediately I recognize him as someone I know.  Furthermore, we work for the same company and he is a cyclist, too.
I really wasn't in any danger because he wasn't rolling fast enough that I could have easily avoided either running into him or he running into me but the irony of it all is what get's me.  When I got to work, I sent him an email thanking him in jest for not running me over.

While it was cold it wasn't really that bad.  I have ridden in colder temperatures.  In fact, when I was about 2 miles from the office the only part of my body to get cold was my toes.  I could have gotten off the bike and walked around for a minute to warm them up but I was close enough to the office that I just pushed on.  Overall the ride in was nice until I hit front side of the office park where my building is located because that is when I finally hit the head wind.  That was brutal!
On the way home, I took the most direct route home and got home in 41 minutes.  It was still cold enough to warrant wearing all the same gear even through there was predicted high of 37 degrees but when I checked before leaving the office the temperature was hovering at 32 degrees.  It looks like I will have to do Commute #23 in order to achieve my goal of riding 500 miles to work this year.  If I had ridden more this summer I wouldn't be commuting in wintry conditions.  However, even if I hit 500 miles sooner, I would still be riding.  As long as there is no snow on the roads and the temperature doesn't drop below 15 degrees I am going to continue to ride.
at 8:04 PM

Hey, those lobster gloves are somethin' else...never saw them before. What's your lowest temp commuting? I did 22F a couple days ago, but with my windbreaker it wasn't so bad, although i'm not in the seat as long as you (my commute is about half the time). Keep going for 500!

Ben, coldest I have ridden was 3 degrees, two years ago in January but I will never do that again!