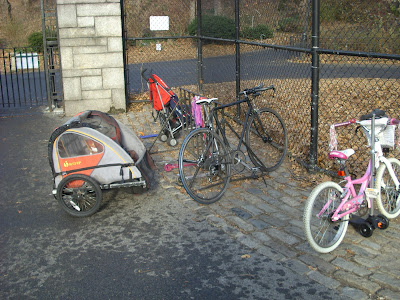 Any chance I get to go to NYC, it's always an adventure for me to see what kind of cornucopia of bikes I will see because it's a much easier form of transportation and the adaptations to bikes, especially those used by delivery people tend to be extremely interesting.  While visiting relatives this past Sunday on the Upper West Side, which is extremely residential, the selection of bikes were mostly family oriented.  After brunch we took the kids over to the River Run Playground at the end of 83rd Street and while the kids were running a muck I took the opportunity to snap a few pix of this interesting, rattle canned City bike with a Ghetto cockpit.  Of course, the owner looked at me taking pictures of his bike as some kind of kook but while our kids ended up playing together I got a chance to chat and put him at ease that I wasn't planning on steeling his bike. 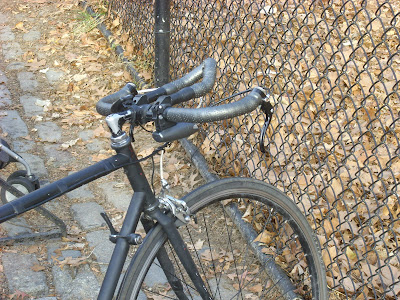 Our conversation was more about the kid trailer and that he rides his kid to school, uses it for grocery shopping and general exercise.  Clearly, it's an older model, steel lugged bike, rattle can black, to make it less enticing to a would be bicycle thief but with a Shimano 105 group. 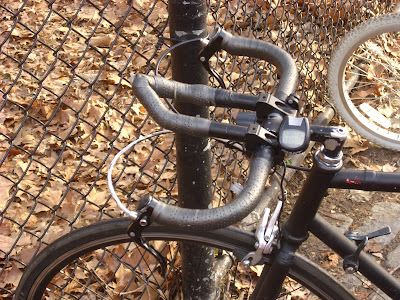 What struck me as interesting however was the cockpit.  Flop and chops with Cross levers instead of aero levers.  Side mounted Cateye - why not mounted correctly?  I don't see why it couldn't be mounted correctly in combination with the aero extension bars, in fact given arm positioning the Cateye in that position would only serve as an alternative to an arm rest. 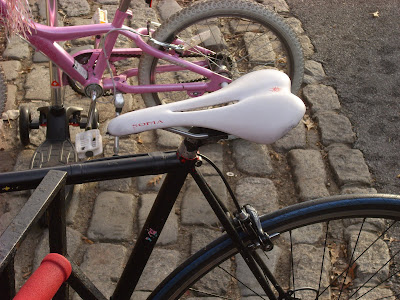 Nice Soma saddle.  A very interesting cockpit adaptation that I will remember for my next Old Crappy Ten Speed Conversion project, which by the way reminds me, I haven't done one in over a year now.  I have quite a few frames to play with, too.
at 6:04 AM