After the pounding we took here in Western Connecticut earlier this week my riding plans for the week that I have off were literally blown away.  However, a buddy of mine who lives in Eastern Connecticut offered to sell me his Velocity Blunts so I drove to Old Lyme to pick up the new wheelset and to try the front wheel out.  Turns out the eastern part of Connecticut got much less snow than we did in the western part of the state and seeing that this is probably my last opportunity to ride in 2010 I was pedal to the metal!  What I didn't expect was how close the color of the rim would match the Dillinger. 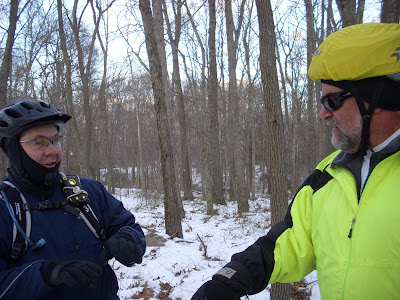 Snow depths ranged from three to six inches of snow, some places were deeper due to drifting, but what made riding the hardest was transitioning between where people walked and the loose powder.  Still, it was a lot of fun and a great workout.  Thom and I met another mountain biker out on the trails, John W., but he was having a hard time pedaling and was walking more than riding.

This was also the first time riding with my new HD video camera, the Drift Inovation's HD 170.  I shot some ski vids the other day with it but I was out of power on Monday and couldn't edit any.  The files, however, are huge!  Above is an edited (shortened) clip that I loaded to YouTube.  It turns this unit takes DVD quality videos at a resolution of 1280 x 720, and that's just the medium setting!  The data file has a lot of overhead data in it, like stereo sound, and it's uncompressed, that I found from talking to Thom, if it were compressed it would be a much smaller file.  The other thing I need to ensure is that my helmet is on my head really tight. 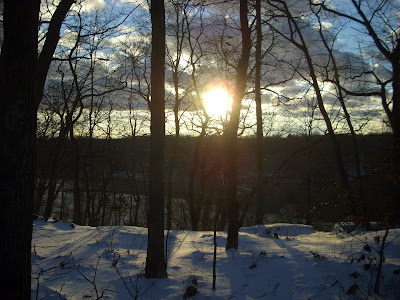 We started riding around 3:45 pm and as you can see the sun was starting to go down but there was plenty of light for riding.  Still, it was really cold with the wind.  Initially, I was going to ride with my CT NEMBA Trail Ambassador Jacket, however, the wind was so strong I felt that wasn't going to keep my warm enough, so opted for a polar fleece North Face jacket that also acts as a zip in for another jacket.  I got pretty hot in the jacket but was able to vent most of the heat through a combination of zip pits and the main zipper.  I also had on Bib tights, and over pants.  That was a bit of overkill but combined with my lobsters, skull cap, and winter riding booties I never got cold.

Here is a slightly shorter clip of riding down the ridge towards the Pavilion at Rocky Neck State Park.  It's a really cool descent there are many rollers and rocks to roll and huck.  Of course I took it easy because of the conditions but looking forward to coming back here again when all the snow is gone.
We rode the board walk along the beach over to Giant's Neck where I will be renting a house this summer with my family.  Looks like I will be hitting Rocky Neck every morning and then doing the bike trails with my boys and daughter in the afternoons, besides lounging on the beach and building sand castles.
We tried to find the house that I will be renting but had the wrong address.  Thom took this picture of me and you can see the camera atop my helmet.  I originally tried mounting it on the side of the helmet but it was too heavy.  Whereas with my skiing helmet, the fit is more snug and I barely noticed it there. On the Mountain Bike helmet, however, it doesn't fit as snug and I could feel it pulling to one side. 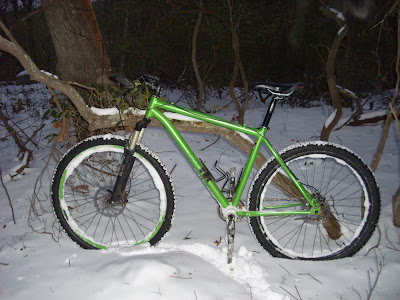 For these kinds of conditions, the Qball would have been perfect but it's still in the process of getting rebuilt.  The Dillinger performed beautifully in the snow.  Climbed just about everything and got a tremendously good workout!  Of course the snow softened a lot of the trail and the new wheel performed beautifully.  I might have to consider some Orange Blunts for the Qball.  Below is a little 3D map of the single track riding area of  Rocky Neck.  It's not a huge place but according to Thom there are many more trails in there to ride.  I am going to try to get back here in the spring to try them all and to familiarize myself with the area better so that when I am spending my week here, I know exactly where to find the goods. 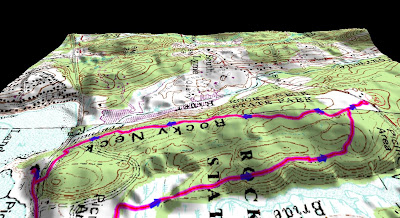 Wicked fun trails. I there are other trails in Old Lyme too.
My father is actually part of a land trust that has properties throughout the town. If you are riding a geared bike it would be a nice day hitting all the little land preserves (bikes are allowed).
I put together a nice little 2.5 mile loop from 156 to Rocky Neck. Do 4 or 5 laps and ride back to my parents house in OL. Tomorrow I have to measure my sisters shower in EL so I'll ride over there from my folks and hit the park on the way back.

Yeah, that side of the state is where the riding is at right now.

Looks like I will have to do a little more homework before vacation. Thom told me there are some trails in Raven Woods that I will have to check out, too.