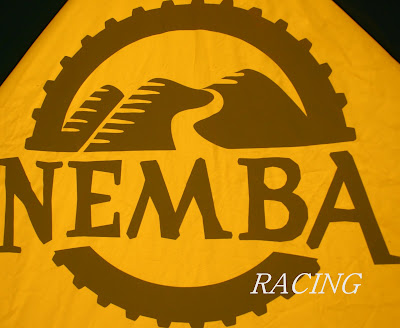 Drove up to Ware, MA on Sunday to race at Domnarski Farm for my fourth R00t 66 race this year. Wondering what the course would be like since we got around 2 inches of rain the night before but they didn't get any, that is until an hour before I got there. Art Roti, Team Captain for NEMBA Racing showed up 10 minutes later and parked next to me. We set up the NEMBA pop-up in front of his car. Shortly there after Fabian Esponda showed up, he rides a Soul Cycles Dillinger in Banana Yellow, and was able to park next to Art. Then Marjorie Bowen arrived and parked next Fabian. 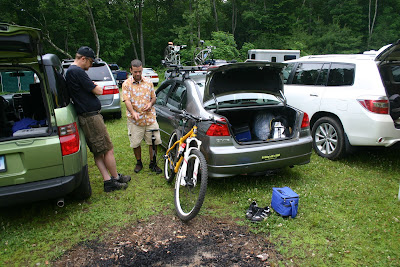 Turns out Marjorie's husband, Dwight, is a frame builder (Bowen Bicycle Works) who has built some custom road and cyclocross bikes and now wants to give mountain bikes a try. I suggested that he try to minimize chainstay length for a 29er so that it would be particularly maneuverable for New England Trails. 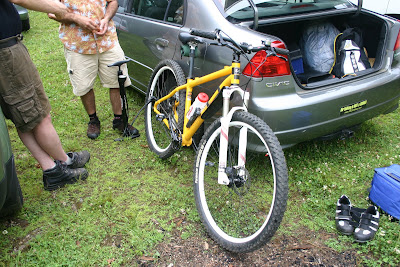 Both Fabian and Art looked at my headtube and concluded that there is something indeed wrong with the headset/headtube. I borrowed Art's headset tool with the intention of knocking the cups out and inspecting it to see if there is a crack in it. 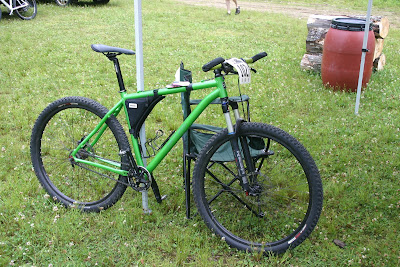 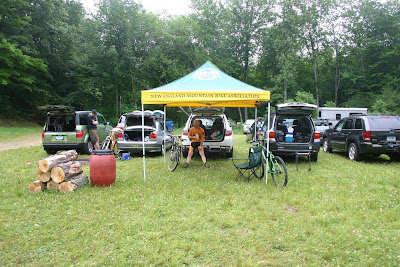 In the immortal words of George Costanza, "Look at the Spot!" It was a great parking spot. Close to the exit, near the finish line, near the registration barn, and most importantly right across from the port-a-crappers. 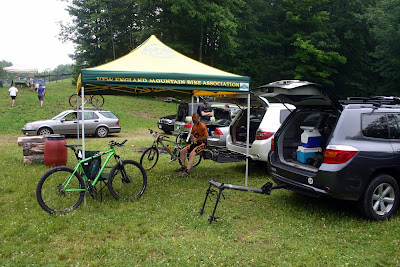 By the time the CAT3 race kicked off the parking area was probably three quarters full and probably due to all the rain was poorly attended. 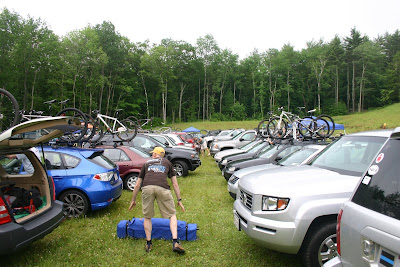 Art and I did a practise climb by basically climbing a mile up the first climb and it was greasy. It reminded me a lot of riding Kettletown State Park in Southbury with all the rocks, pine needles and ferns in which the trail ran through.
It didn't dawn on me until after the race but thinking about it now I definitely had the wrong gearing. With all the climbing involved on the course I should have been running 32:22 instead of 32:20. I guess I just got complacent. I think staying with the Kenda Krests was a good move because they perform well in really muddy conditions as well as really technical sections but I should have had the mud flap on because they do kick up a lot of dirt and mud. Also opted to ride without eyewear because the steamy conditions would have fogged them up on the first climb. 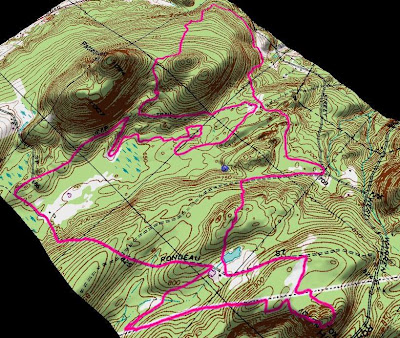 It was a dirty course to say the least but it was a lot of fun. At the start the singlespeeders were grouped with a bunch of teeny boppers who should have been in front but were in the rear and blasted all around us. Of course when they hit the first climb in the greasy singletrack it was like a pileup on the FDR Drive. Further up the first climb, I was passed by most of the 50+ group, including this one guy on a Fuji Tahoe that I recognized from the Winding Trails Race earlier this year. We played cat and mouse through the majority of the course but I lost him on the powerlines climb and caught up to him about three miles out from the finish and he never caught up to me.
Not having the right gearing for the terrain and combined with warmer temps made breathing a chore. Unfamiliar terrain and not having raced in almost two months really added to my lack of attack on this course. Still, it was really challenging and fun. About 2 miles into the course I noticed something really weird, my bike wasn't creaking! I wondered if all the evaluation to the headtube settled the headset cup, which probably was the culprit to begin with.
I even caught up and eventually passed some guys from the category ahead of me, I think my age group! One of them was on this white, Special-Ed 29er with a Bike Barn jersey (I think) that by the 5th mile was still shiny clean. I asked him how he was able to keep his bike so clean but he just laughed. I wonder if he coated his bike with Pam (an old winter fly fishing trick to keep you eyelets from freezing). We played a little cat and mouse for a few miles but then I pulled away from him, too.
At the tail end of the powerlines this younger girl, who must have been really pushing herself way beyond her norm, passed me but was wheezing and bleeding from a cut on her leg. Quite a few times she wiped out ahead of me, in fact, once was in a mud bath. I don't remember if she finished in front or behind me but she really didn't know how to ride a mountain bike. I bet she was a roadie. 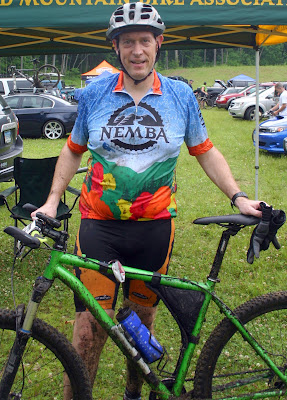 This was by far the wettest, dirties race I have done to date. There was mud everywhere. 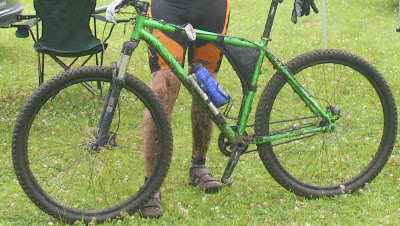 Well, a last place finish in the singlespeed category was definitely in my future unless someone DNF'ed but fourth place isn't all that bad for series points. Pictured below is Garth Bean, the first place winner. Some new guy (I think he was from western Mass) riding an On-One with a rigid carbon fork and mary bars finished second, then Fabian, and myself. I only saw one other singlespeeder in the CAT2 race but he must have been racing in his age bracket. 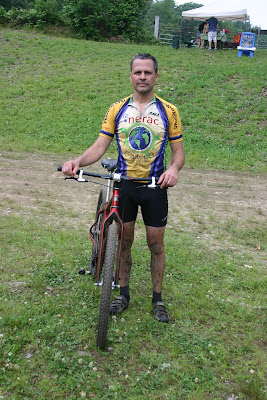 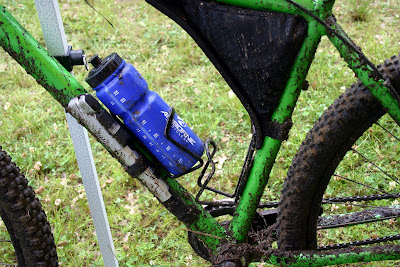 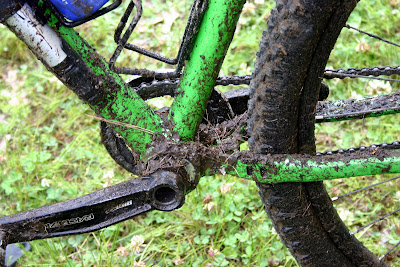 The weird thing is that it never rained while on the course (that would have been nice) and only started raining 30 or 40 minutes after I was done and that was just initial down pour followed by sprinkles. I spoke to my wife and she told me there was a tornado watch along the I-84 corridor. After hitting the barbecue and checking my time (1:31) I hung out with Garth, Fabian, and the second place finisher and talked about trails and riding. I headed home about 3 PM and not five minutes down Rt 32 it started to pour. When I got to Palmer it was torrential and when I crossed the state line it was raining so hard I could barely see 20 feet in front of me. That was some rain storm! 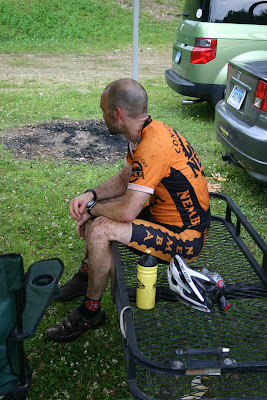 Art after the CAT1 race - he was looking beat. 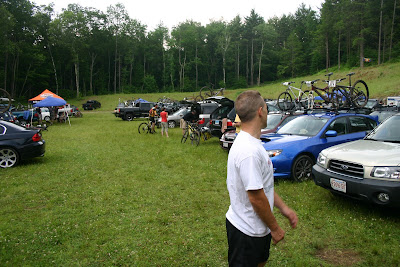 Thanks for coming! Posted some pics on Root 66 site and my FB.

Way to get down and dirty! Sounds like a great time!