Check this (Cassette) body out! 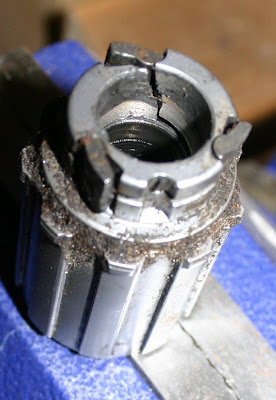 Thanks to the good guys over at Brookfield Bike for taking another look at the 'Horse's gearing problem and here is what they found, a cracked cassette body. Holy cow! How the heck could that happen? The only thing I can think of was it could have happened on last year's Turkey Burner when I snapped a link while climbing a hill. I could have had a little chain suck and when I laid on the cranks to climb the hill the chain snapped and my guess all that force on the chain was pulling on the cassette, which was pulling on the cassette body and it all went at once.
So, here's the really butt burner. As you may or may not know Iron Horse is out of business and so far I haven't been able find anyone that carries this part.   A former IH employee ... the guy who spilled the beans that the company was going belly up ... from MTBR,  that the manufacturer of this hub is a German company called Tune.  Turns out, after a little email correspondence it's not their hub.  It seems trying to find a replacement is no futile, and after examining the hub I can't even use my Surly Fixxer on it, the only thing I can do with it at this point is throw a TomiCog on it and use it for fixed gear riding.
June 6th, 2009 Update:
Buddy of mine with the same wheelset had a different problem and had his hub rebuilt.  Came to him bone dry, no grease and it locked up with a little moisture.  The shop said it was Hugi hub.  Sent an email to DT Swiss, who apparently makes or distributes these hubs.  Maybe I can get a replacement?
at 9:57 PM

Email ThisBlogThis!Share to TwitterShare to FacebookShare to Pinterest
Labels: Components