Chased out by the rain! 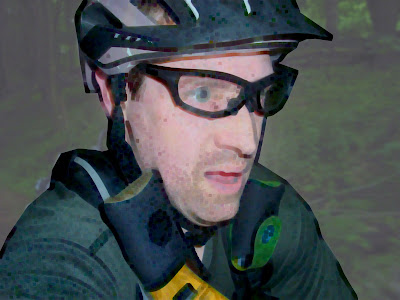 After riding with the boys earlier in the day I headed over to Collis P Huntington State Park in Bethel. There was some thunder off to the north but I figured like most storms it would track from west to east and bypass where I was at. Similar to last weekend I tried riding familiar trails but from a different direction and got turned around quite a few times. When the wind picked up and the thunder got louder I knew it was time to head back to the car. Fortunately, I hit a trail that I recognized and headed back to the Dodgingtown lot as fast as I could spin the 34:19 gear. I contemplated heading down Rock and Roll but the big drops of rain splattering on my visor dissuaded that thought.
When I got to the lot it was raining pretty good. I was all set to go when I remembered that I left my Edge attached to the bike. Now it was raining a little harder. Took the bike down, got the Edge off, bike back on the car and drove off when it really started to pour. On the way home it was raining so hard that I almost had to pull off to the side of the road due to limited visibility. The one good thing out of all this was that the Qball finally got a good washing!
at 11:14 AM