Just in time for winter?

Now that winter is undwinding and spring is a mere 9 days away, what perfect timing to unveil my new winter commuter. It's a 1992 Bridgestone MB-5 that came into my position via the town dump. Unbelievable how someone could throw out a classic bike. 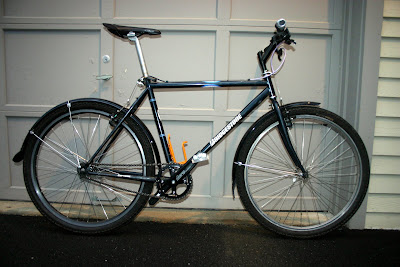 Below is what it looked like when I got it. In order to make it a Singlespeed I had to use a different crankset. I originally tried to get the bottom bracket off but it wouldn't budge. Took it to the shop and they couldn't make it budge either. Rather than putting a torch to it that may or may not work I decided to let sleeping dogs lie and just find different cranks with square splines. The cranks that came with it had an offset but I couldn't use them with a single ring up front becasue they all mounted in the spider at one point. Ended up finding a drive side single crank with an off set and ordered the left side through the LBS. 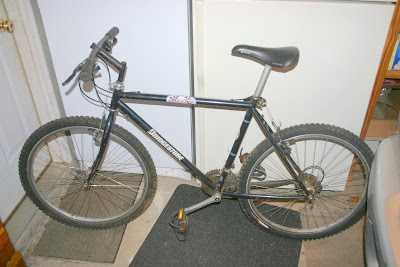 I got a 130 mm comfort quill stem from Nashbar with a removable face plate so that I could use my Ritchey Flat Bars that I originally got with the Qball. I was hoping to trade a friend of mine a few bottles of BBC for my FUBars that I traded to him last summer for an aero brake lever but we never connected. I have some old Avid levers, Seras ergonomic grips, and a mount for my Topeak bar bag. The cable housing upfront were a little ratty so they got replaced with some slick mauve ones. 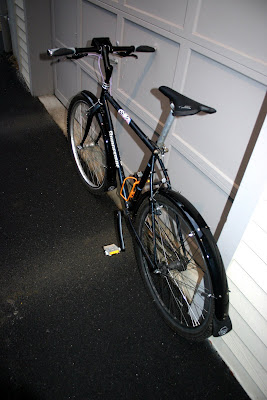 Right now, I am using the rear wheel from the Fixation until I finish rebuilding the rear hub with a Surly Fixxer. Gearing is 42:16 with horizontal drops. Before he passed, Sheldon Brown told me the best gearing was 42:15 for horizontal drops but I couldn't get that to work with minimal chain sag. With this gearing, the sag is minimal. Right now I have the freewheel set up but when I start commuting with this bike I'll use the 16t TomiCog. 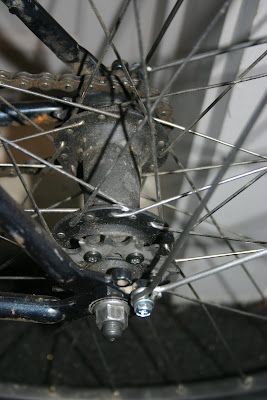 For rubber, I got some old Kenda Kross tires from the dumpster at my LBS. They were cool with it because the prior week I bought some tires from them. The seat post came from when I traded my Peugeot UO-8 for two seat posts to a French bike afficianado, which by the way I got another one the other day that I think I might build into a fixie for a quick Fix and Flip. Planet Bike fenders, that I had to shave in the front in order for them to fit in the fork crown. Crank Brothers pedals from a friend that got a new bike but only rides Shimano. I am using a San Marco saddle and I replaced the brake pads. 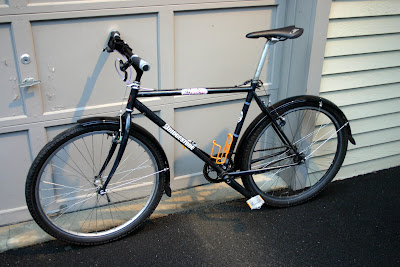 Just have to get a rack for panniers and it will be ready. I had one but ran over it in the garage and had to throw it out. I have a Blackburn but it doesn't have the seat stay mounts that the newers one.
at 5:00 AM

Do U have any plans of posting all the steeds you have stored in your garage, shed, basement, car trunk...

I probably should. I need to do a family shot like what I did last summer. Here are my Three Amigos from last spring, I think.