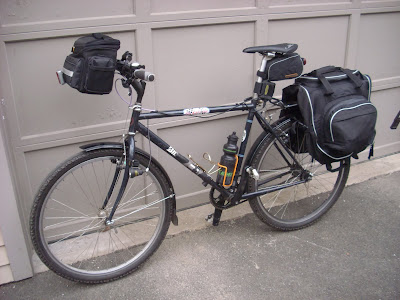 On Monday, I began my one day-a-week, save gas and ride to work day. It was 27 degrees yesterday morning and I was close to chickening out. However, once I got moving it was OK. Still, to get suited up for the ride was an ordeal in itself and took 15 minutes. Today I tried a fleece vest, riding jacket, fleece pullover and a Techwik T-shirt. I wore my winter riding bibs, spandex shorts, and fleece snowboarding shorts. For the feet, I finally got to test out my overshoes and they did the trick! It was the perfect combination of clothing for the temps. 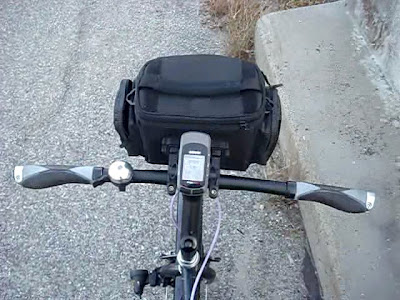 I rode the Bridgestone with the freewheel single speed, 42:16, and it rocked. It was a little slow climbing but it wasn't like I had to do the walk of shame. The bike felt rock solid, if not a little on the heavy side and small. Adding to the weight was my garment bag panniers and I was carrying my laptop in a backpack. That is the only drawback about commuting on Mondays is that invariably I will be bringing home the laptop for the weekend and it means I will have to drag it back on my back.

Had one mechanical along the way, my seat clamp wasn't tight enough and the saddle shifted backwards. Had to stop and fix that before I could go any further. Unfortunately, I think the bike is too small for me. It's probably a medium, and if I do sell it I am still in a quandary about what to do with the rear wheel. I have a Surly Fixxer but I already have enough money into the bike that I am afraid to add any more.

I am using the wheel from the Fetish but since it has vertical drops it's overkill to use a bolt on hub. That leaves the wheel it came with, in which case it can only be marketed as a single speed or I could go with the Bombblast wheel I still have, which is overkill on the roads, and that way I can still get some fixed gear riding in. The best scenario is to find a 26 inch flip flop wheel, cheep, and use that.


On the way home I wore just shorts, Techwik, and riding jacket but it was too cold after a mile and a half so I threw the fleece pullover on and a hat and I was much more comfortable. Bike performed flawlessly.
at 12:25 AM