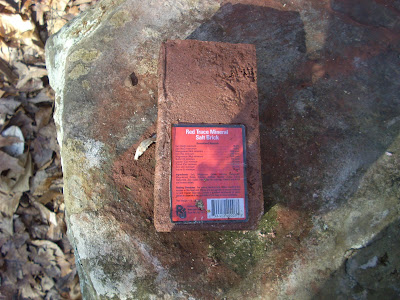 I noticed this last weekend and I was about to throw it into the woods on this past ride when I turned it over and saw that it had a label. It is indeed a salt lick. Judging by the placement there are a few clear fields of fire for the would be hunter. I wonder if this was the same hunter that decided to block the trail?

According to the CT DEP website, Use of Attractants for Deer Hunting, Upper Paugussett happens to be in Zone in 11, however, it is public land and not private so the salt lick is verbotten (forbidden for those that don't remember SGT Schulz from Hogan's Heroes) according to CT DEP.

Use of Attractants for Deer Hunting. The following attractants may be used while hunting deer in Connecticut:Deer decoys during the early and late archery seasons only. All types of scent attractants (i.e., doe in heat, buck lure, urine, tarsal glands, food smells, smoke pole) that provide no substance for deer to consume. All types of sound attractants (i.e., doe calls, buck calls, antler rattling, electronic calls).Hunting over planted fields where normal agricultural planting, harvesting, or post-harvest manipulation is used.In addition to the attractants listed above, the following are allowed on PRIVATE LANDS ONLY while hunting deer in DEER MANAGEMENT ZONES 11 and 12. Minerals or chemicals that may be safely consumed by deer (i.e., salt licks).Artificial or natural foods placed, scattered, distributed or deposited (i.e., hay, grains, fruit, nuts and other foods that may be safely consumed by deer).

Well, this is obviously a direct violation and I have sent a note to the State DEP about it. Unfortunately, there isn't a whole lot they can do I suppose. By the looks of the brick it appears to be broken which means there is probably another one nearby.
at 5:44 AM

There's some 'sportsmanship' for you. Right up there with bear baiting. I don't get the 'killing sumthing' attitude with hunters.

There is no sportmanship in hunting around here. They think they own the land and can do anything they want because their "hunting lobby" is so strong. A friend of mine is building a trail across the river and in a little state park that is open for bow hunting 3 mos during the year and the hunters have done everything in their power to thwart her efforts. I keep telling her to get the State DEP to close the park for a year to teach them a lesson.