I took the boys on Saturday to ride from the Chesire section of The Northampton Road, which is now known as the Farmington Canal Greenway.
Didn't get enough last weekend so the Boys and I went back for more. This time we started out on the Chesire side of the trail and parked at Cornwall Avenue. It was a lot colder yesterday and it was a good thing I planned for that. The "trunk" of the Burley was filled to the top with extra jackets, hats, gloves, and a vest for me in which Brodie insisted wearing like a Poncho.

The highlights of the ride for the boys were before riding having lunch with their Great Grandfather whom they just call Grandpa Earl and the stop at Brooksvale Park. We rode down to Mt Carmel Station where we can get a good look of the Sleeping Giant:

There is a really interesting history of the area called Born Among the Hills by Nancy Davis Sachse that I found on line that is worth reading about the area.

All the historical Topography maps indicate there was a station here and the buildings that are still standing appear to be arranged as such.

In the image above I merged the 1892, 1914, 1954 and 1976 topography maps of Mt Carmel Station into one image.Had a snack and some water and then turned around and rode back to the park. Elliot wanted to go all the way to the end of the line but we didn't have enough time. 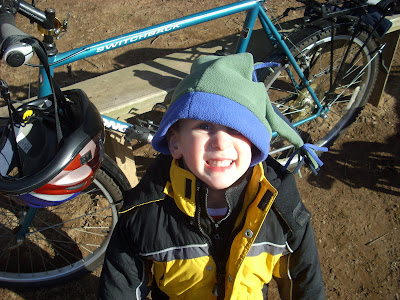 At the park everybody need warmer jackets and hats because it started to get really chilly. Brodie liked to go down the slide on the little jungle gym, then run across the path to swings, jump on and do a belly swing and then scoot back.
Once they were good and hot from all the running around it was time for some Juice boxes. 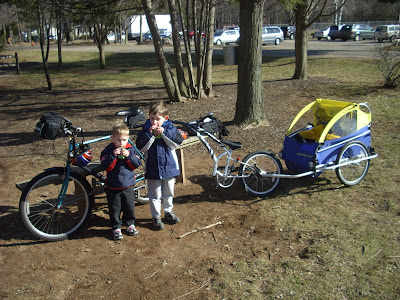 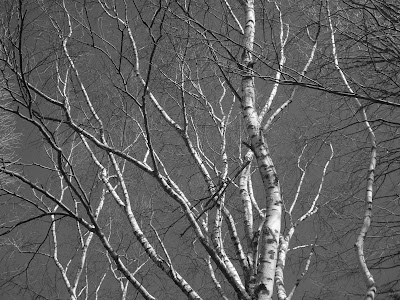 I love this birch tree at the park 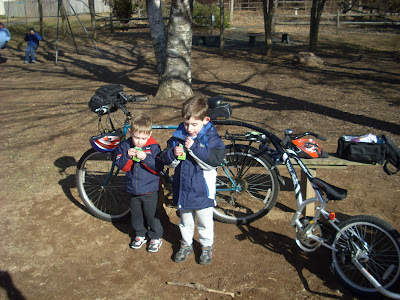 The boys sipping their juice boxes from another angle
For the ride back to the parking lot I mounted my camera to the arm of the Trail-a-bike and filmed Elliot almost the entire 2 miles back to the car. It's a long video but he is so cute between his questions from left field and singing to himself. You will notice a few times where I had to stop and appease Brodie a few times.