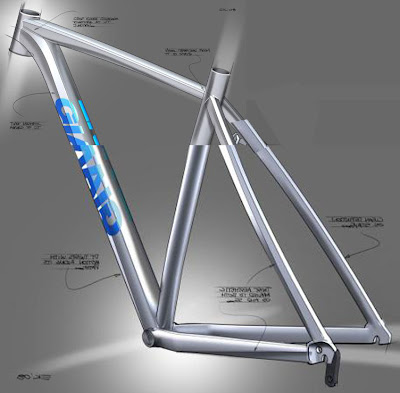 The mountain biking blogsphere is all abuzz about the fourthcoming Giant 29er and I am not sure I am really all that impressed. Above is a lousy photochop rendition of the sketches that were posted on their Facebook page. From what I gather the notable features are hydroform tubing (hmmm I think Kona and Marin already did that) but what appears to be truly unique is the headtube is somewhat integrated. I read somewhere that this head tube is for a special fork from Marzocchi, meaning probably can't build this just by aquiring the frame.

Similar to the Fixed Gear Apocalypse that BSNYC keeps preaching about, it appears that the 29er movement has finally reached critical mass, now that Giant is entering the market. Kind of looks like the Marin Pine Mountain, which Giant probably produces, and it was only a matter of time till they copied the design. Of course, I don't know that for sure but when your factory churns out a lot of the bikes we see here in the US by different manfacturers, you got to figure there will be some design coppage.

So, who doesn't make a 29er? Here is a list of the major bike manufacturers that I pulled from eBay. If there is a link, they have a 29er, if not, they are bolded and red (the exception is Trek, they have a 69er but no dedicated 29er, so they are purple - pink didn't show up well with the white background).

Azonic
Bianchi
Cannondale
Cove
Diamondback
(they claim that they started the revolution 17 years ago)
Ellsworth
(Look for the Evolve)
Foes
Fuji
(didn't know they made mountain bikes until last year)
(not only do they have an SS, they have full susser, too!)
Gary Fisher
(Gary claims he invented the 29er)
Giant
(coming soon)
GT
Haro
(they have 650b rig as well)
Huffy
(They make mountain bikes?)
Independent Fabrications
Intense
Iron Horse
Jamis
K2
KHS
Klein
Kona
Leader
Litespeed
Marin
Maverick
Merlin
(looks like they have one but their website is under construction)
Mongoose
Moots
(they also make a backwards 69er that they call a 96er)
Motobecane
Niner
(Duh!)
Norco
Raleigh
Redline
Rocky Mountain
Salsa
Santa Cruz
Schwinn
(are you kidding?)
Scott
Seven
Soulcraft
Specialized
Surly
Sycip
Titus
Tomac
Trek
(they make a 69er but no dedicated 29er)
Turner
Univega
(they make mountain bikes?)
Vassago
Ventana
(not only do they a 69er but also a 650b!)
Voodoo
Probably missing a few manufacturers but I think is a pretty good cross section of the market.  65% of this list makes 29ers and even if I discount those manufacturers that only make 29ers you are still look at more than half the population making 29ers.  I'd say that's a critical mass.
at 5:49 AM

Yeti Won't do it. They are Anti-Niner...

Ah.. Giant maybe the only 29er maker with the drivetrain on the left side. now that's ingenious, eh?

Yeti's are for Bettys

I never saw that but flipped the pic in photo shop - if you notice the lower part of the logo on the downtube is actually GIAN.. going up and backwards.

Norco has two 29er HT's for 2009. They are listed on their website. They actually look pretty cool...

BH, thanks for pointing Norco out. I went to their site but didn't see anything - I certainly could have missed it. Norco has two hardtails. The line is called the Jubei (Ronin).

Soma Fabrications make a 29er too. The Juice. http://www.somafab.com/juice29.html. They have pics of a built up Juice in SS that belongs to an Aussie guy. They also do a 650B frame as well (but that's another story)

Yeah I almost bought a Juice before getting my Qball. I was trying to keep this list to all the major bike manufacturers and stay away from what I would call the niche players.