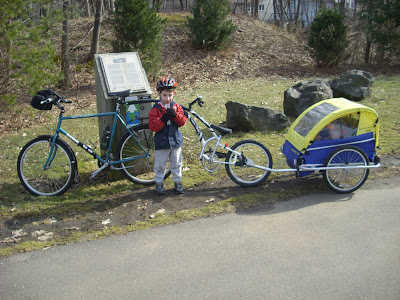 I took the boys to the Farmington Canal Greenway in Hamden, CT today. Since both won't fit in the Burley trailer togehter anymore I hooked it up the Trail-a-bike and made a train. I tried this once before over on the Housatonic Greenway in Monroe. It works great but I don't think I get much help from Elliot. I think he just likes the idea of cruising and letting me do all the work. 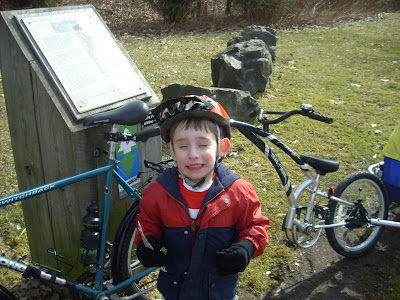 Brodie loves sitting back and watching the scenery go by. At one point, he got a little upset sitting back there so I offered him my cell phone. Told him if the phone rings, hit the green button, and talk to who ever calls. My wife called and they had a pretty good conversation. Later, Brodie's grandmother called, too, and they talked. 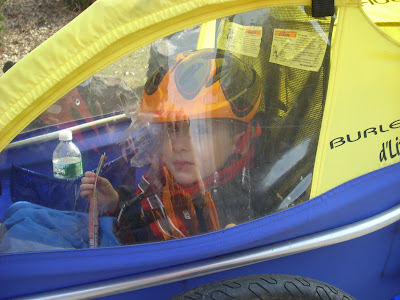 I think this is the first official parking lot for the Greenway. We parked over by the Stop & Shop but it didn't look like official Greenway parking. Apparently, you can park over the near CVS and start from the beginning to get the full experience, which I might try next time. 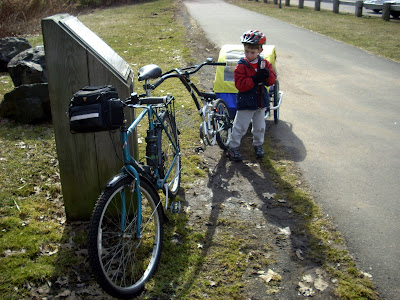 I wore my helmet with the camera mount and aimed at Elliot and Brodie but as you can tell by the angle it should have been pointed down further.


Kid Train from Mark on Vimeo.

Above is the map of the route, which includes the little foray into Brooksvale Park. The boys needed to run around since they were accustomed to doing this on the Monroe Rail Trail I figured why not. What's nice is the Town of Hamden built a bike path off of the Greenway that comes right into the park. One one side, next to the Sugaring Shack, is a little jungle gym and the other side is swings.

I let the boys bounce back and fourth while trying to get snack foods into them. The only draw back to the park was the lack of facilities, which were closed at the moment. Even if they were open, they were still pretty far away and up a hill. Not sure if is on purpose for plumbing or gravity issues. As soon as I got Brodie settled in he informed that he had to go! I took him over to another parking that was a little more secluded so that he was water the plants.

This was the first ride on the 'Goose with the new Ergon Grips and they are simply outstanding! I was skeptical at first but everyone I have spoken to swore by them and now I see why. They were so comfortable, I think mainly because my palms had a place to rest. We stopped at Monroe Cycle Fitness to pick up a few tubes, which I forgot to bring in case of a flat I picked up a brass bell. It mounted perfectly to quill stem and resonates loudly. I got a little horn for Brodie to use in the Burley, too. 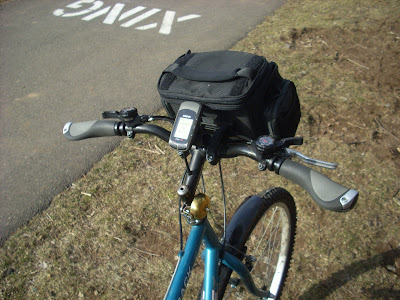 Another new thing I finally tried is the heart rate monitor on my Garmin Edge. Sportracks has a great feature to let you analyze your heart rate with a few different graphs. I think if I weren't stopping all the time you would see a smoother graph.

While looking for parking areas I found a little history on the Greenway that you can read about here: Farmington Canal Rail to Trail Association. After the ride we met the boys' Grand Parents and their favorite Uncle, Uncle Mike, at Eli's for Pizza. They loved it. I think we are headed back next weekend, only this time I am going to plan on trying to ride to the end, and then on the way back hit the park for a picnic lunch.
at 9:53 PM