We shall abolish the orgasm... 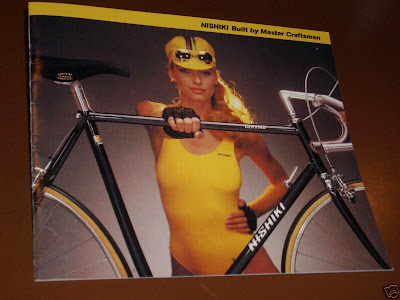 The title for this post comes from George Orwell's book, 1984:

God forbid anything like this could ever happen in the near future and to make up for this perverse prose I hope you enjoy the cover of the 1983 Nishiki Catalog cover that I found on Yojimg.net. I think she beats the Colorado Cyclist Cover Girl. I haven't seen that catalog lately, I guess they have written me off. Afterall, of all the cycling catalogs I get, that has to be one of the most expensive.  I chose this quote because it seems to me that frame in question originated in 1984 and I thought a quote from George Orwell would be fitting.

As for my quest to pin point the model year of the Nishiki unfortunately the interwebs were not fruitful for my Nishiki Cascade that I started working on this weekend. It was an exhaustive search that has led me to make some conclusions based on other clues from the frame and parts that I have found. From Bikeforums.net, in which I asked the general biking community for help what I got in return was a link to another forum post called the Nishiki Serial Number Database.
Nothing unfortunately was yielded on this post that might tell me how hold my Cascade is, except for the stamp on the BB shell, G0184. Accordingly, it means that the Cascade was made by Giant in 1984. The Sugino cranks have a code on the inside that says GC, which according to the Vintage Trek Website for Date of Manufaturer for Bicycle Compenents states:

Code 4 - A forth code method was reported by Mike Swantak. His ’83 Centurion Le Mans 12 has a Sugino GT crankset, with the two letter code GC. This would appear to follow the method used by Shimano, where the G indicates 1982 and the C indicates March. This is supported by Dan Carlsson of Sweden, who writes: "I have a Sugino GS crankset with the codes "GC" stamped on the inside. This seems right, 82 March; I believe the crankset is from an 1983 year roadbike.

So the cranks are from that same time period as well. They must have had a good run on those cranks to be throwing them on later model bikes. The 1983 catalog contains Nishiki's first mountain bike called the Bushwacker. 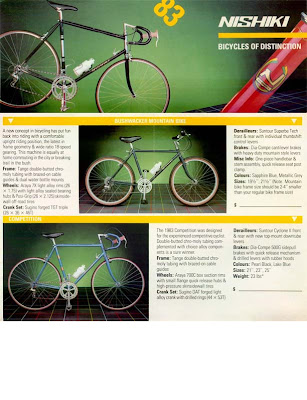 The Bushwacker looks exactly like the Cascade and has all the same components. So it could be that they renamed the Bushwacker to the Cascade in 1984 or possibly the Cascade happens to be the Canadian version of the bike. I haven't found any mention of the Bushwacker and Cascade existing simultaneously, however it is possible, it would seem unlikely because the bikes are identical and you would think around this time, mountain bikes in general were a niche market play.  Usually when identical bikes coexist, from what I have seen, the other bike would have upgraded components, e.g. I have a 2007 Iron Horse MKIII Comp which has pretty good components but the next level up is the Expert which has better components, costs another $1000 and is painted black. 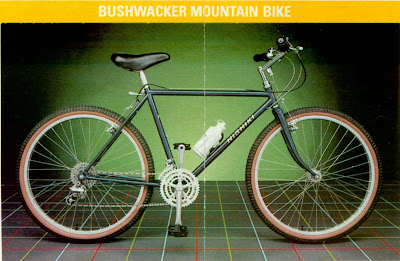 This bike (above) looks exactly the same as my Nishiki before I stripped it down to the frame.  The only differences I can find are the color and the name. 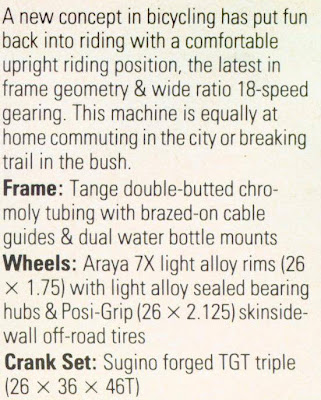 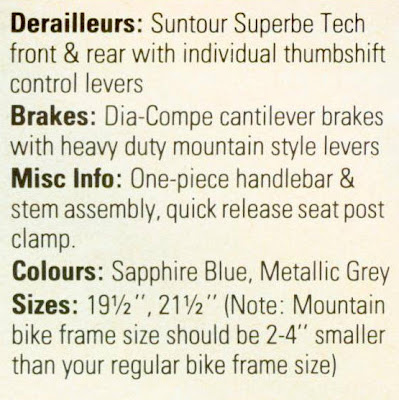 So, there you have it. Unless someone comes along and tells me otherwise, I have a 1984 Nishiki Cascade. Last night I pulled the fork off and I am going to attempt to replace parts of the headset with the headsite from another bike. If that doesn't work, I'll try griding off the rust because I think I am going to build this into a fixie. 27" wheels fit nicely so I could build it into a no brake fixie or go back to 26 inch wheels and go fixie or SS with brakes.
With that I leave you another Nishiki Girl to help assuage the assault on your morality. 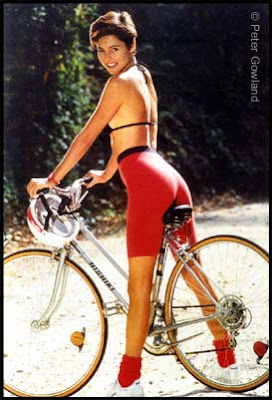 Email ThisBlogThis!Share to TwitterShare to FacebookShare to Pinterest
Labels: Nishiki

At least they've got her holding a svelte road bike. If they had her astride that 1984 mountain bike, she'd look kinda frumpy today :-)

hello, i bought Nishiki Bushwacker in 1985 at Montreal. it was yellow and black. 18 speed, bio pace, index shift at left for front shifter , U-brake specifiq complited adjustement and Chromoly tube. I gone a trip to Vancouver island with them in 1989 and Havvre St-Pierre , Québec in 1991. It is always my MTB in my garage and i hope to take a road again in a few month.... :-)