I am amazed at how many people Google "29ers and Craigslist" and thus hit the Snack. It must be due to the fact that searching within Craigslist is pretty myopic in that you really can't search in particular region and it's localized within the various Craigslist domain cities. However, if you are looking for a broader search capability for anything, especially bikes on Craigslist, you should check out Craigspal.
Craigspal has two versions, a freeware and a power version. There is a cost associated with the power version but if you are just doing casual searches, the freeware version should be sufficient for your needs. Not that I mind the traffic and I sure hope I get some repeat viewers but if you want to really, proactively search for something on Craigslist, this is the tool for you.
Firing up Craigspal this evening I noticed quite a few 29ers pop up. There are some competitively priced bikes and then there seems to be some really wishful salesmanship. I think if you try to sell something on Craigslist that is worth more than a $1000 your are probably fooling yourself. I think you would be better off trying ebay or posting in the "For Sale" forums of local bike forums.

I come to Craigslist looking for a bargain. I don't see bargains at $1500, $2000 or even $4300 as one bike is being offered. If I am going to spend that kind of scratch on a bike, I am buying new! So I have called out three adds, because they have pictures to discuss.
Frequent diners of the Snack may recall an earlier post involving this same bike model, a Motobecane, being proffered on Fairfield County Craigslist. I find it interesting that the seller hasn't mentioned some of it's finer points, like the 42:16t gear ratio or the fact that it seems most SS (Singlespeed) 29ers are rarely configured solely for SS but this one is and what that means is if you are not man (or woman) enough to ride SS then this bike is not for you because you can't easily convert it to gears. I also like how the seller mentions that the bike retails for $795 at your local bike shop but you can get it at bikesdirect.com for $399. 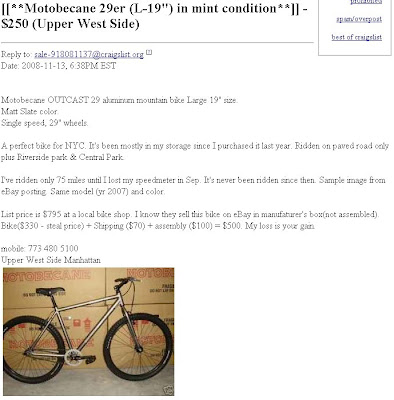 However, I did find an ad on eBay for the frame alone: 2009 Motobecane Outcast 29er and lo and behold there is a really big change for the frame in '09 - paragon style drops! For the price of $184 clams and free shipping, it is very tempting. I wonder what it would be like to ride Aluminum? As for the bike offered on Craigslist, it would make a great fixie!
Now, this next bike is not only awesome but the price is out of this world! I bet it doesn't last. Why someone is selling such a sweet rig is beyond me. It seems like a waste to sink a lot of money into a fine bike and then turn around and sell it like this. Not sure about the Spinner fork but the frame alone, brand new, runs around $429 at Bike29.com. It's a nice build with Avid hydros - damn! 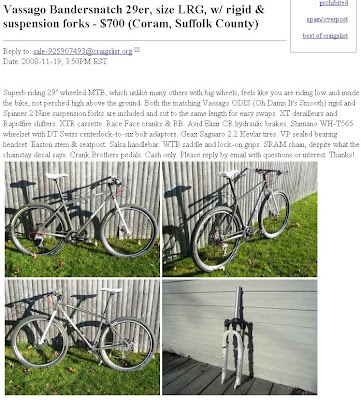 I think this next one is a bit overpriced and goes against my rules for buying a bike on Craigslist.
It's got some really fine components but the first question I would ask the seller is how much it weighs. If it's around 21 or 22 lbs then it might be worth taking a look at. Still, an EBB, eccentric bottom bracket - enables you to the vertical drops and still have chain tension when riding SS, is not my cup of tea. 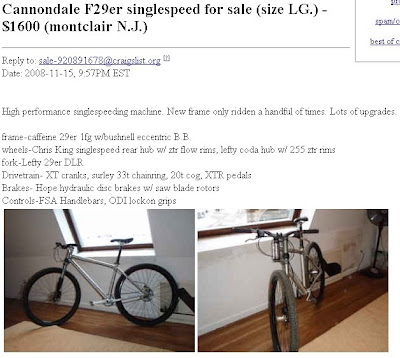 Maybe I am being paranoid but one of the reasons I like riding SS is that it keeps things basically simple that means there are less things that could break, because when it does happen and you have to hump five miles back to the car. An of course the other downside is the lefty fork. It's probably a great fork and I would like to try one some day but it means a special attachment for roof top bike tray and again, like the EBB, another really technical thing, i.e. that lefty hub.

There are definitely some great deals out there right now and then there are some that are really outrageous. For example this one:

If it's really new and hasn't been tested out on the trails of Mianus then it probably is worth the asking price or something close to that. I would like to see a picture of that bike. The only thing though, is if you are going to spend that kind of money on a 29er then you might as well go full suspension.