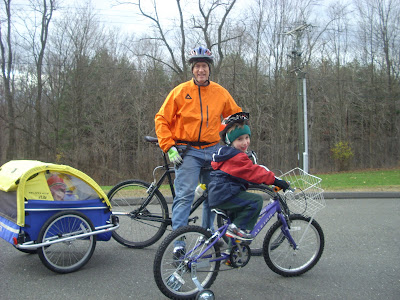 Had a few hours to kill on Sunday so I took the kids over to Reed School and rode around the back driveway near the ball fields. It was really cold and blustery. Not only did Brodie ask to ride in the Burley, I think he is afraid of riding in the Topeak baby seat because it reminds him of riding on the trail-a-bike, but when we got there he even asked for the top cover on the Burley.  It's always a fight to convince him to ride with this on but the weather certainly changed that.
I was tempted to ride the 'Goose but needed a fix with the fixed gear Fixation. It's funny, that if I am in the right mind, that is knowing that I am on a fixed gear bike, there is no longer any hesitation to coast. I love riding fixed gear! In fact, once I get the Fuji built up into a fixed gear I think I am going to rig the Fetish for off road fixie riding again, and even try it as a 69er again. I think I need to try riding as a human full suspension bike again. 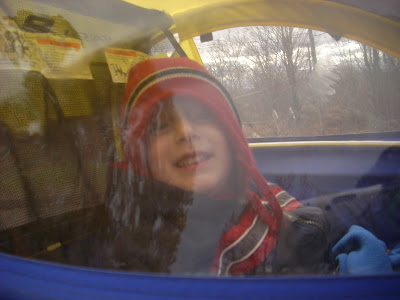 It's funny but I got that bike for Katie for her to try gears and she totally loves it but it's almost too small for her. Of course when I mention replacing it with a 24 inch wheeled bike she says "no way" but even a girl friend of hers who is 6 inches shorter already rides one. The one thing I haven't tried is raising the seat. On our ride around the school campus Katie unknowingly pulled her first huck off a curb. 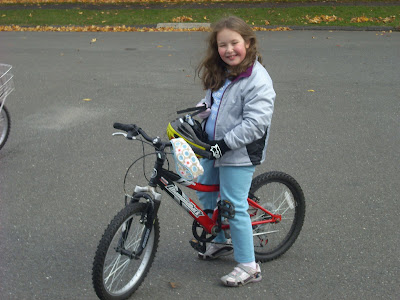 Elliot was naturally having a blast and probably would have had more fun if the wind wasn't blowing so hard. It was so strong that he couldn't pedal a couple of times. I had to get him going with a big a push and then ride along side of him with a cadence to keep him going, otherwise he would stall out. 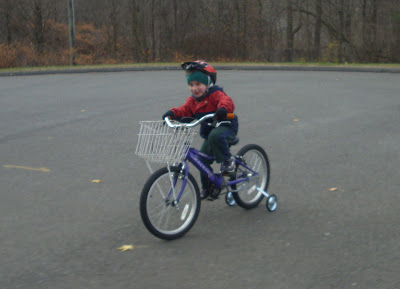