Yesterday I had to travel to NYC to visit a software vendor and get some extra training on the application that I am installing for a couple of business unit within my company. Hopped on the 6:52 out of Sub-rural-urbia headed to New York. Where the branch line hits the mainline there was some delay that kept the train standing still for about 10 minutes. Conductor informed us over the loudspeaker that there was a train that they were waiting for that needed to clear the platform in front of us.
We finally got underway and picked up passengers at South Norwalk. Over the summer, when I was working in Norwalk I would normally get out here and not getting out this time was a little unsettling. However, the delay we experienced meant that the trains on the mainline were all backed up. There seemed to be a higher than normal amount of commuters getting on our train. Three stops later the train was pretty packed.
It was so crowded that people were standing almost back to back in the center aisle of the car. I haven't seen the train that packed since the blizzard of 1995! Granted I stopped train commuting in 1996 so there could certainly been other instances similar to that fisaco. I happen to have my camera with me and got the unique opportunity to record some commuter tension.
The crowded conditions caused tempers to flare. In fact one commuter that was standing in the aisle next to the row of seats I was sitting in expressed his anger to the conductor. I recorded this interchange between the disgruntled commuter and the train conductor:
On the way home, there were print outs on many of the seats explaining about what caused this morning's delay. Apparently, a trained lost power right before South Norwalk and was blocking all four tracks. I like how Metro-North concluded the note:

We regret any inconvenience you may have experienced as a result of this incident and thank you for your patience.

I wonder if the disgruntled commuter felt better after reading this note. I doubt it.
So, besides being delayed on the ride in, which was really no big deal, let me tell you about what I saw in the Big City! Didn't see much on the short hop over to the Vendor's office but on the way to lunch I saw bikes! I would say that it was 50/50 for geary vs fixed. In retrospec why I didn't have my camera on me when I should have! I guess I didn't want to appear as a some country bumpkin from Sub-rural-urbia gawkin at all the neat stuff in the Big City, but I think I could have held it discretely at my side with the video running and captured alot more.
I think I might have even seen Williamsburg Hipster riding her fix downtown on Madison Avenue, however, what threw me was that the bike actually had a kickstand. Maybe she wasn't a hipster afterall. The bike, however, was a dayglo green conversion with a little slack in the chain. Could that be another sign that she wasn't a hipster. I guess the country bumpkin/dork that I am was too blinded by the wonderful sites of the Big City to scruitinize the bike and the rider further.
Saw a Peugeot similar to mine chained up to a sign post on 44th and numerous mountain bikes all over the place. With the exception of the two bikes down below that I managed to digitally capture, the rest of the fixed gear bikes were all converts with a lot of slack in their chain lines. Now, I may be a bumpkin from Sub-rural-urbia but I would never ride a fixed gear, nor a single speed, with that kind of slack. It's sacreligious ifyou ask me.
Another thing I noticed was the fact many of the bikes all had those rear fenders that mount to the seat posts. Some had seen better days and were fixed up with hockey or duct tape. My guess is that these bikes were for delivering food because they were all geared bikes. As luck would have it, there were two fixers parked right in front of the Metlife Building.
The first one is an IRO, I think a commuter based on the braze ons for the rear brake cable and brake posts, nice adorned with a Crankbrother's sticker on the top tube and CB candies. Besides being a bonafide fixed gear bike in New York City, what struck me was how it was locked up. U-lock/Kryptonite on the rear wheel and frame and frame and front wheel chained to a street post. Also, the Brooks saddle is secured nicely to the frame. The owner of this bike cares! 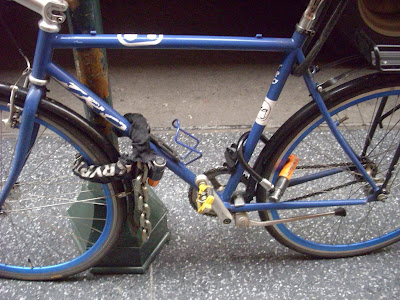 Bike looks like it get's lots of use by the worn grips. Of course, the kickstand seems a bit out of place but it is a commuter. 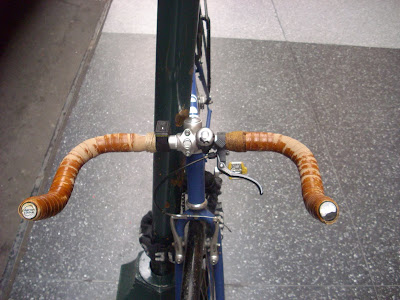 My guess is that owner of this bike rides to GCT and commutes out to White Plains or Connecticut for work. Looking those fenders, this is truly a hard core fixed commuter. 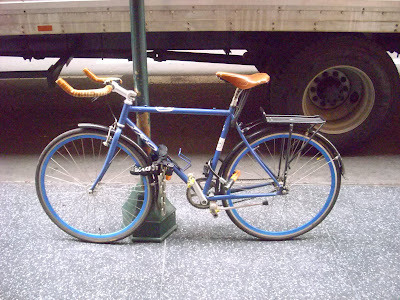 This Paddywagon was securely locked to another street post. I like how the owner locked the seat down, too, with a separate cable. However, this rider is not riding fixed, rather had the freewheel set up. 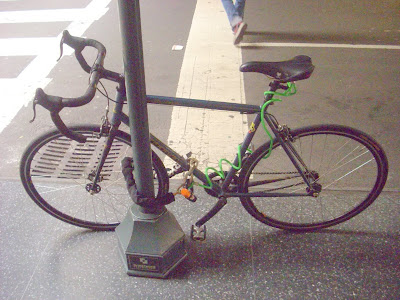 This last bike, not at all a fixed gear or even singlespeed rig, rather an extra cycle and the first time I saw one live. Definitely made for carrying big loads. The Mundo Cargo Cycle is from Yuba Cycles. 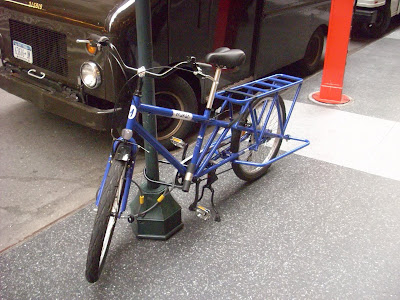 Again, locking the bike in front of GCT seems to be following a trend only the seat is not locked. I guess gel seats are not a highly soft after item on the bicycle black market. 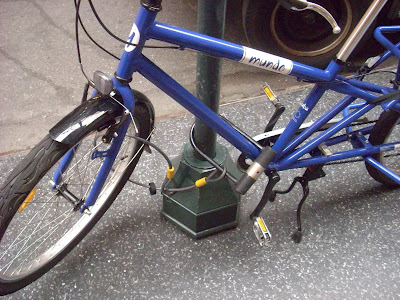 Since this bike can fit three passengers and was pretty clean looking I wonder if this was another commuter bike for someone riding out to the Burbs to work? 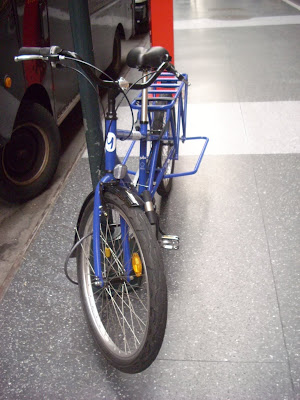 I hope to visit the big city again and the next time I do, I am going to ensure that I get more "live" fixie footage.
at 1:34 PM