It was a chilly 44 degrees this morning compared to the previous two days. It was hard convincing myself to get ready to hit the trail. After a second cup of joe and poptart, I decided it was now or never, an hour and half later. Wearing riding pants, long sleeve jersey, riding jacket, and a head band I was pretty comfortable. My feet did well with wool socks but it wasn't until I got to the Gussy Trailhead that my hands finally warmed up. Still, it was great being back on the bike again.

I was wondering if I might develop some muscle atrophy during the week of vacation where I wouldn't be riding but I think I got plenty of exercise walking 6 days at all the Disney World parks and it was business as usual on all the climbs today. 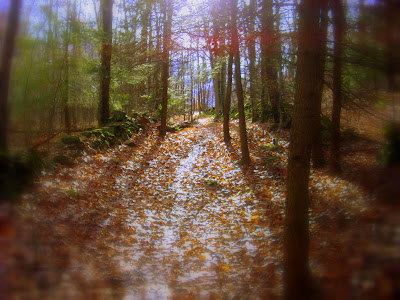 (A little surreal shot on the Gussy Trail looking south just after the Wet Spot)
It has been over a week since I was on the trails and now with all the leaves down it's a whole new place. On the way in I spooked some dear near the Echo Valley lot. A Doe and a four or six pointer. It's funny when they bound off into the forest how that white tail pops up like a beacon for the rear party to follow, kind of like cateyes on the back of a patrol cap. They probably figured since it was Sunday, it was safe to come out and forage in area where they would otherwise get whacked. 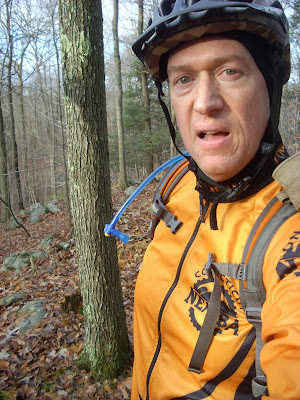 Decided to try the CT NEMBA Trail Ambassador jacket on the trail and I have to say that it's the perfect compliment on a windy, chilly ride. I thought I would overheat due to the lack of zip pits and other venting options found in jackets but I did not.

The Gussy is riding really nice even with all leaves down. I don't know how anyone can could loose the trail now that there is a clear depression in the leaves which marks the entire trail. Granted, I still need to blaze the trail but that will have to wait till spring. I have some ideas for a few more trail tweaks hear and there but they too will have to wait. Hopefully, I can get out before the real cold weather sets in and do a little needed benching and of course I will be on the look out for new stuntry opportunities.

Speaking of stuntry, below is a better picture of the log ride. I didn't try it today because I wasn't sure with the wet conditions but it looks just as sweet as ever. Along those same lines, with the leaves down I did scope out some nice rollers and rock spines along the fire road that might be work setting up some off shoots. 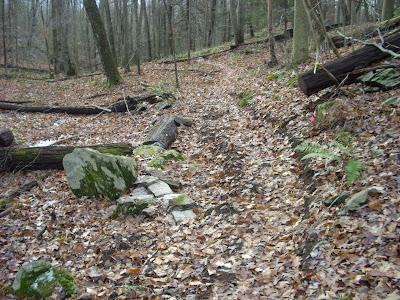 It appears that the ATVs have not returned, at least not on this side of the forest. On Thursday, however, I did notice a fresh set of ATV tracks entering the forest off across from Silver Spring Lane but my guess is that the interloper when down the west side horse trail. 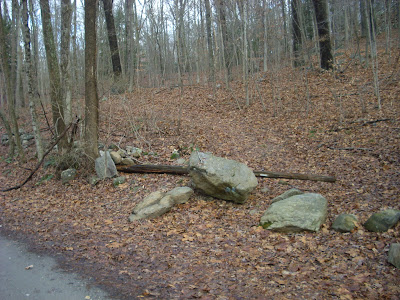