Sub-rural-urbia received a little dusting of snow last night and I really wanted to do a RbW (Ride before Work) this morning but I went to bed too late last night to even consider getting up at 5:30 AM to ride. Waaah! Not to mention, it was below 30 degrees this morning. Waaah! I didn't charge up my headlight battery. Waaah! Excuses, excuses. Going to try tomorrow morning regardless of temperature.

Anyway, the Dump Fairey paid another visit last night. A 24" wheeled FS big box store POS that I want to rebuild for my daughter, a ladies bike, not sure of the manufacturer, it was too dark to see what it was, mostlikely another POS, and what looked like a fairly old styled mountain bike. The last bike, appeared to be a good condition so I pulled into the garage for a closer look and it turned out to be a Bridgestone MB-5! 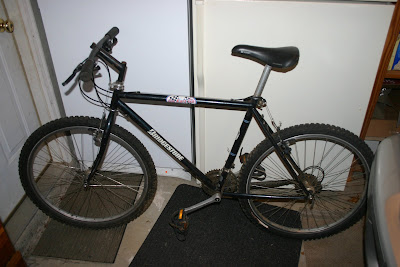 I have read a lot about Bridgestones and was hoping that this bike could potentially be a classic bike. From what I know about these bikes, however, upon surfing the interwebs I learned that it is unfortunately not from the Bikeforums archive I found this comment:

The MB-5 was a DeoreLX/DeoreDX equipped bike I believe and depending on the year, retailed for around US$550. A very fine mid-level bike. 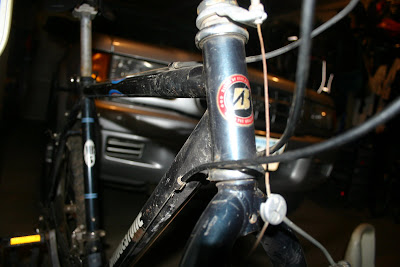 I guess if it were truly a good bike such as the MB-1 or -2, the owner would have realized the value of the bike and hold on to it or at the very least put it up on CList. Alas, like the Peugeot, which at first I thought might have been the highly prized PX-10 turned out to be the more mass produced consumer US model (still made in France, if that is any consolidation) UO-8. However, it's still a nice bike and if you query the Fixed Gear Gallery for Bridgestone, you'll find a few of the MTB versions of the frames have been converted to nice fixed gear rides. So, it looks like I have my next project lined up. 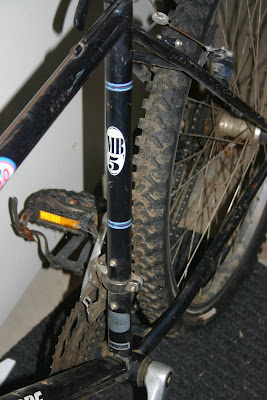 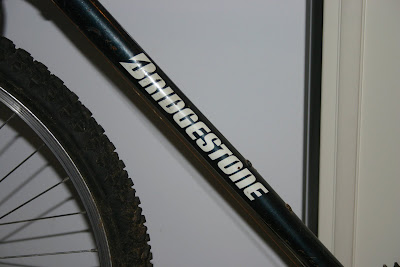 @davidmorganrn Did you look at the the 1992 catalog? The 92 MB-5 had the option of either thumbies or the Shimano Rapid Fire (underbar) shifters. The '94 is touted with a squishy fork where this does not. Therefore, I have to stick with my original conclusion that this is the 1992 MB-5 version.

This is a '94. The oval "MB-5" downtube badge is conclusive proof of that. Bridgestone did not use that oval badge on any other other year's bikes.

Bridgestone-USA had been pressured into dropping many of the Grant Peterson touches by '94. Suspension forks on many bikes and underbar shifters on all of them were two of the changes.

They dropped double-butted CrMo tubing on their low-end bikes for '94, but the '94 MB-5 still had DB CrMo and basically the same geometry as the previous years' MBs.