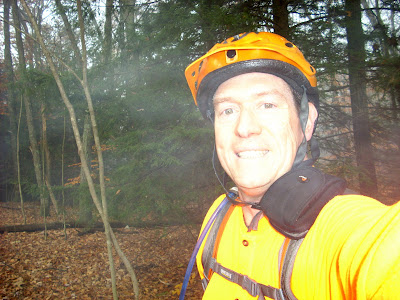 After performing my civic duty this morning at Oh Dark Thirty, I rushed home, oranged up, jumped on the 'Horse and headed out to Upper Paugussett State Forest. The weather on Tuesday morning was a balmy 39 degrees and 85 percent humidy which seems to make things a lot warmer.

My friend Rob said he was riding at Upper Paugussett Sunday afternoon and spotted three ATVs coming out of the white trail onto the fire road. He said he found their tracks on the other side of the forest coming from the West Side Blue Blaze trail . 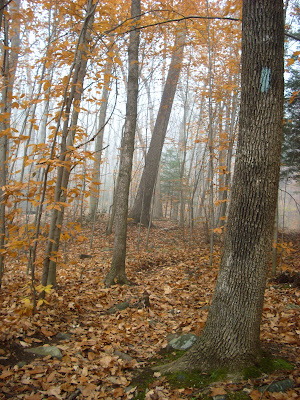 Further up the trail you can see they are they are creating their own stream crossing by tearing through the mud. If this keeps up this way, this could easily become like some of the trails at Lower Paugussett State Forest that have been ravaged by ATVs. 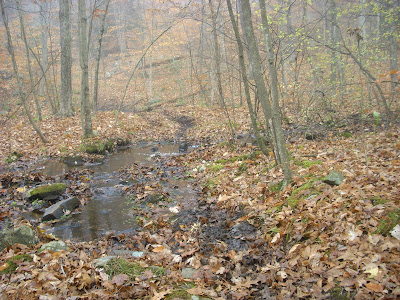 Hoping to atleast slow them down, I tried to block the entrance somewhat. Hopefully this will slow them down long enough so when the cops show up, they'll get busted for riding unregistered motorized vehicles on town roads. I have also asked the DEP to put up some signs at this entrance that say no motorized vehicles. Unlikely that will deter them but at least if they were not aware of it, maybe, just maybe it might do some good. 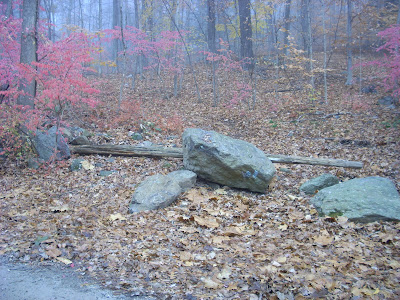 Otherwise, I had a great ride. I think I have to remind myself that if I am riding in temps below 40 degrees to either a thicker pair of wool socks or two pair of thin socks if I am going to wear my non-insulated riding shoes. Otherwise, a wicking shirt and a blaze orange henly kept me moderately warm during the ride to the trail head. I probably could have worn shorts but opted for BDU trousers instead.

There was one car in the lot at Echo Valley but I didn't see any hunters. I could tell that the Gussy trail is seeing primarily bikes. Didn't see any rustled leaves that would indicate that someone walked on the trail. In fact, besides Rick and I riding the trail on Sunday, along with Rob later in the afternoon. Rob said he passed a couple riding up the trail. Which reminds me that I have to start riding the trail that way again to once again experience the trail from the other direction. There might be things I am missing.
at 5:48 AM