Old Crappy Ten Speeds: Every bike has a story

Old Crappy Ten Speeds seems to be on the forefront of everyone's minds these days. With the rapid rise of gas this summer, looking for ways to save gas seems to be a big theme and one way to save some gas and get a little exercise at the same time is to ride a bike. So the biking craze, if you can call it that, appears to have once again re-emerged and it seems quite a few people are pulling those old bikes out of the basement or garage and trying to sell them on eBay or Craigslist.

What is an old crappy ten speed? I would categorize it as any road bike with shifters on the down tube or on the stem, made out of steel, and sports 27" wheels. I know Cannondale was making aluminum bikes in the 80's because I recently had a Cannondale SR300, which was aluminum and made in 1985. The cut off point for an old crappy ten speed, in my book, is the 1990s when bike manufacturers started selling bikes with either Shimano STI Levers or Campagnolo Ergolevers and completely moved over to aluminum bikes.

I have seen a few OCTS while riding with my kids on the local rail trails. One of the local bike shops that I frequent told me since June they have seen quite a few OCTS come into the shop for servicing and to get them running again. At one point during the summer I had heard that there was even a shortage on 27 inch tires. Besides for recreation, you really don't see these bikes being used for transportation, at least not in Sub-rural-urbia. I am sure in cities like New Haven, Hartford, and Boston, all manner of OCTS would be seen being ridden by smart people who want to save gas, and I am sure you will see many OCTSs that have been updated to the point that the only original parts is probably just the frameset. 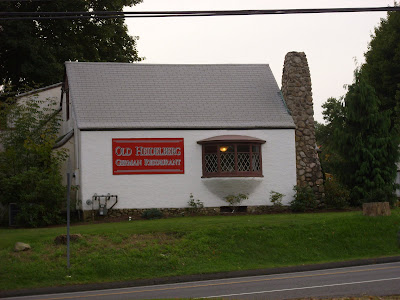 Well, I found an OCTS in action. Situated across form Old Heidelberg, a German Restaurant on Rte 6 in Bethel, CT, is a block of what appears to be efficiency apartments. In the back of one of these apartments is a woman's bike, in pretty good shape, and is never locked up. I pass by it every day on my way to work and the other day I took a picture of it in awe that it has lasted so long without getting stolen. 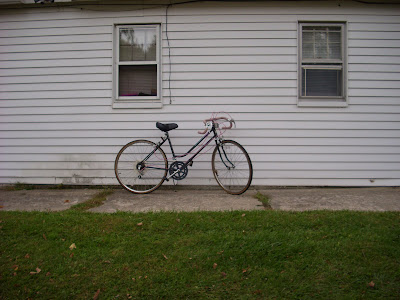 While the street that the apartments back up to is not busy it is within throwing distance of Rte 6 which is quite busy. There is a BMX track not far from here and I always see kids riding their BMX bikes to and from that park right through here. You would think that some kid would grab it but it's there every day. Maybe it's the style and size of the bike that is just not interesting enough for the local kids to waste their time with, or maybe they don't want to be seen on a girl's bike. I am very impressed with the integrity of the kids in this neighborhood, unlike those who stole Carl's Bike, a heart warming post over on the beat bike blog.
I guess I am just paranoid that I would lock it up. I lock my bike to the rack when I leave the car at work, when I see others who do not. I guess my past experiences have made me overly cautious because I have experienced in the past that no matter how crappy the bike is, someone will find it useful and if it's not secured/locked up it will most likely disappear. Many years ago, I was an exchange student in Germany and borrowed a really cool bike from a friend of my host family.
It was a rusted out jobbie with balloon tires, upright bars, and a three speed. I rode this bike everywhere that I couldn't get to by train. I rode it every day to school and back, to volleyball practice, and to the bar. I never locked it up because it looked like a POS and wouldn't you know it - one night after volleyball practice our regular watering hole is closed so we end up going to a more seedy part of town and when I came out, it was gone!
Last weekend I was at the Bicycle Goodie Shop, which is just up the road from here and as I was coming out I saw someone riding this bike over to the nearby deli! That was the owner of bike! The man looked to be of some direct Asian background and was riding with flip flops, shorts and a tank top. Clearly, this bike is his grocery getter! I don't know if it's the owner's primary source of transportation because it's seems to always be there during work hours. Never-the-less, here is a fine example of a working OCTS! 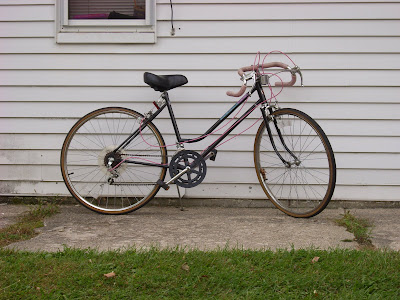