This post might be better suited for the Bike Commuting blog that I also contribute to but I made my big contribution this week already. Check out my post on the Bicycle to Work blog entitled Where do you park your bike? In that post you will get to see my bike parked in my cubicle with all my biking clothes drying after the ride in. I haven't noticed any odors and so far, and no one has said anything, either.
Earlier this week, without thinking, I brought my laptop home. I completely forgot that the following day I would be commuting by bike to work. Oops! After work, and after my last RAW ride, I spent some time trying to figure out how to bring the laptop back to the office on Tuesday's commute. My options seemed to be drive in and try to shift my ride schedule, switch to more of a messenger type bag - unfortunately the best bag from that is from my old company and I am always wary of bringing too much old company paraphernalia to the new company. Or do I use a backpack?

What is the big deal with messenger bags anyway? Is it just a fad for the hipster set or wanna-be bike messengers? Or do these bags offer something more than what a backpack would offer? I have tried riding with a shoulder slung bag before, it wasn't a Timbuk2, rather a canvas attache. I found riding with it to be somewhat bothersome because it would shift and I would have to keep pulling it back up. The only advantage I could see in this bag is that you might be able to get some different carrying positions that would allow more airflow to your back.

If I remember correctly, the movie Quicksilver stylized bike messengers and depicted how the messenger bag was used so that the messenger could whip the bag to his/her front and deliver the goods without ever having to remove the bag. I saw this often while working downtown in NYC in the mid 1990s, too. But, I am not delivering any messages so it would seem that a messenger bag is not the right gear for a bike commuter unless he or she want's to appear hip. I want functionality, personally.

I ended up choosing the backpack. A 4300 cu ft EMS pack that I have had for 10 years that rarely get's any use. In fact the pack swallowed my laptop briefcase with room to spare. The waist belt and sternum strap made it feel like it was part of my body and it was quite comfortable. The only drawback is it gets rather warm attached to my back the whole time, so there could actually be some advantage to the messenger style bag. 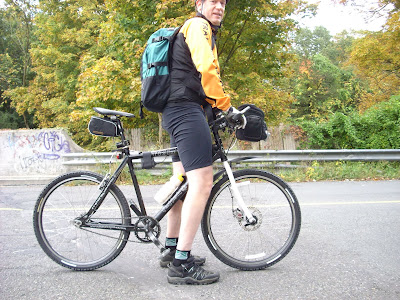 While hitting the various bike commuting blogs I came across an interesting website for commuter bags called Banjo Brothers. They have a waterproof commuting backpack that comes in two sizes.

Click on the image above and it will take you directly to the website for the bag itself. The only thing this is missing is a padded sleeve for a laptop but that would be an easy and low cost addition. Of course another alternative would be to use a pannier.
at 1:10 PM

i think it also all depends on how big your messenger bag is. i have this gigantic bag that kona used to sell like 6 years ago and its constantly slipping off my back. not that fun to deal with when dodging cars. I've heard, the smaller the better in that respect, but then again, too small and you'll have no room.

There's lots of options. I use a messenger bag because it fits all of stuff, was hand-made down the street from me, is bike-specific (comfortable), and watertight. I found that backpacks and midpacks are fine sometimes, but the waterproof ones are always more expensive and hold less stuff. It's probably part habit, too. I'd go with panniers if I had braze-ons, there's no bag that helps with a sweaty back.

The only downside in warmer months is the sweaty back. Just got a new bike for commuting with braze-ons and now I have to get some panniers for the commute. Might try the pannier Garment bag so that I don't have to pre-position my work clothes the day before. Get's to be a logistical nightmare.

It looks very Cool. I love carrying Back pack during my ride. I carry all the needed stuff in it. I bought that from Hydrapak through e-shopping.