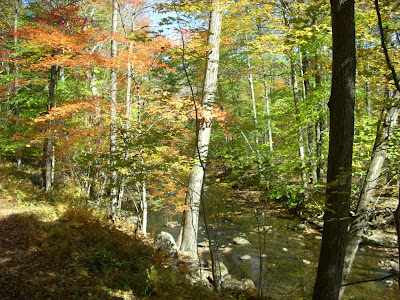 There were only two people at the Gussy Trail Work day, Tom and myself. We got quite a bit done by 11 AM when we called it quits. Since I was planning on riding anyway Tom suggested that I come over ride the Dinglebrook Trails because he created a new loop so I decided to check it out. Once again, another beautiful fall day and the leaf color is simply spectacular. Up above is a shot from the trail head to the Dingle Brook Trails, only on the Pond Brook side.

The map below depicts the Orange Loop that Tom recently put together. It encompasses some trails that I am familiar with and it has new parts, too. It has a few sick fall line climbs that I was able to climb and without Granny's help, too! I need to head back over to Huntington and try the Vomits out now! I actually ran into Tom over on the west side of the loop where in the map below there is an offshoot of the track next to the 400 foot contour.

This trail, along with most of the other trails at Dingle Brook are basically dual track and primarily horse trails. I think there might be one other person that lives nearby that rides these trails from time to time. The blue trail in the Brookfield Open Space section is the only true single track. 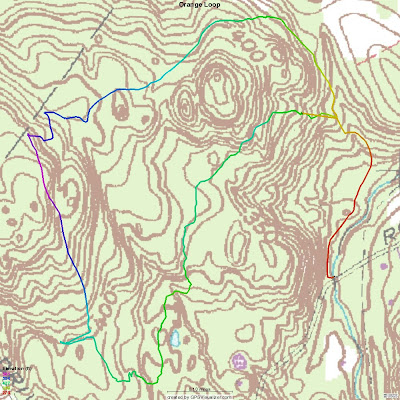 The orange trail primarily follows an old farming/atv trail through the woods. As you can see in the picture below there is quite a bit of climbing. 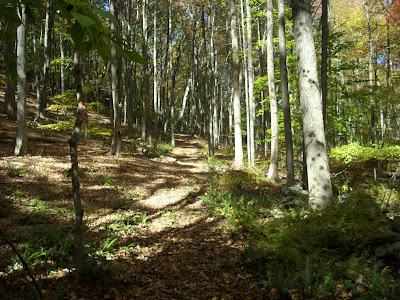 The map below is a composite map of all trails that I have ridden at Dingle Brook this year. It's only been two times but it feels like more. Now with the all the new improvements I think I might have to ride here a little more often. 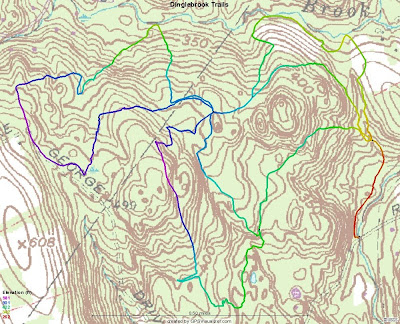 Here is Tom atop his trail beast. Unbelievable how this thing moves through the woods and it's only rear wheel drive. 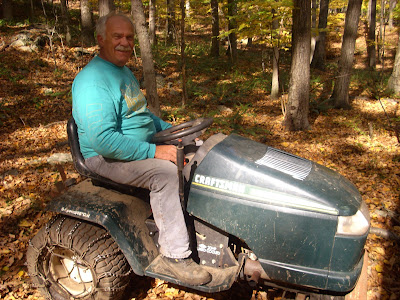 In the map below, I have applied some definition to the trail system using Photoshop. That big line on the topo going up from to west to east is the border between Brookfield (left) and Newtown (right). Clearly there is much more diversity to the trail system on the Newtown side. 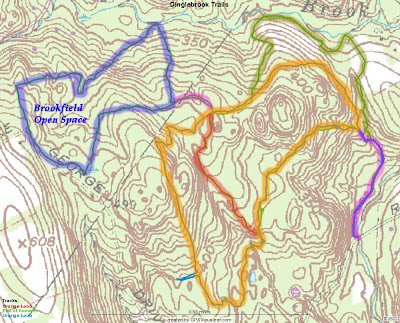 Here I am wearing short sleeves because the temperature on Sunday was bordering 70 degrees. If I had more time I would have done a loop on the Brookfield section but it was great riding the Orange Loop now that it is really well defined. There are a few places where Tom has changed the trail so that it no longer runs through a wetland and which was never been very rideable. One thing that I forgot to mention is on the really straight section on the west side (left) of the Orange Loop is really fun down hill section. A few strategically placed jumps could make this section really cool. 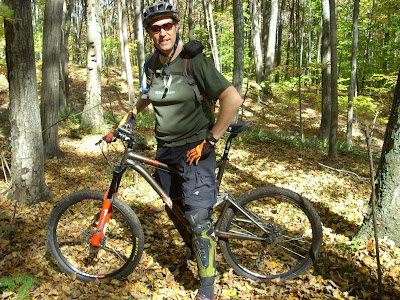 Here are few thoughts that I had for future trails. Add a connector between the Brookfield Loop at the Bench back to where the Orange Loop meets the blue connector (highlighted in magenta). The climb from the Bench always rubs me wrong because it goes straight up the fall line. Most of it is rideable but there are few sections that are really difficult. What is needed is a more gradual climb up from the Bench and connecting back into the Orange where the Red Trail should start and where the connector to Brookfield trail starts. This way you don't have to re-ride the same trail for this loop.

The red trail should also start from this intersection as well. I have added a proposed section (bottom right) on how the trail could run so that it would tie in further down to the connector trail coming from Pond Brook. The junction would be around where the pile of old roofing shingles lies. There are some really nice rock features that this section could use that would make some really cool rollers.

Have the white trail (highlighted in brown) continue around the bases of the big hill and have it connect into the Orange Loop near the stream crossing on the east side of the property. I think there is an old trail that does this so it's just a matter of opening it up again. 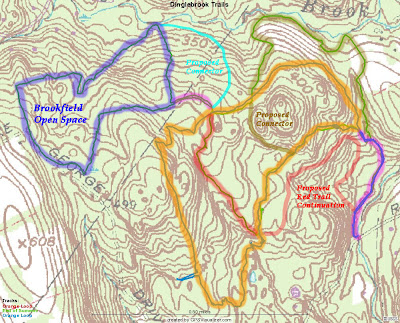 Incredible what you can do with a few hundred acres!
at 12:01 PM

No hunting on Sundays in CT, even on private land.