I happened to be down in Maryland on business this week and brought my Qball with the intention of riding the NCR Trail, a 20 mile rail trail that starts in Cockeysville, MD and ends at New Freedom, PA, which is also considered the Mason-Dixon Line. The railtrail follows the North Central Railroad Right of Way. 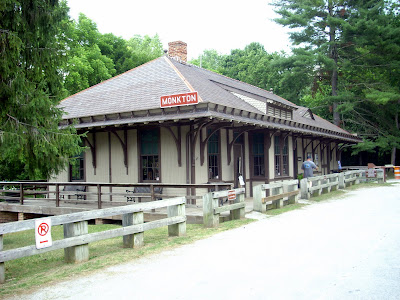 I knew I wouldn't have enough time to ride the whole trail and back so after work I headed up Rt 83 to Hereford and then over to Monkton where I picked up the trail. Monkton is a little antique town with Federal styled architecture. It's also a popular place to park to go rafting on the Big Gun Power Falls. 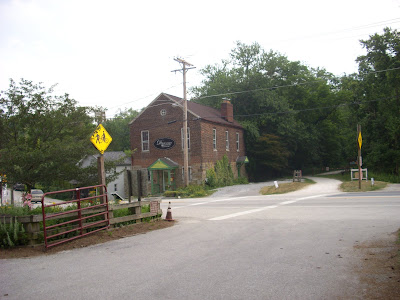 The architecture in Northern Maryland is a mix of various styles, including old manor houses, Federal styled architecture and a little Germanic influence sprinkled here and there, due to the close proximity with Pennsylvania. The building below reminded me of buildings I saw in Southern Germany. Along the way are many farm houses and old building stretching back to the 1800s. 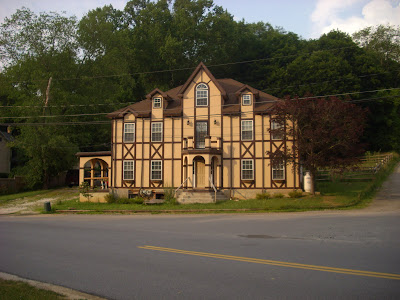 The northern part of Maryland is horse country and I saw quite a few signs that horses had been through lately, until I came across a woman walking a horse on the trail. She was acclimating him to people and bikes on the trail. 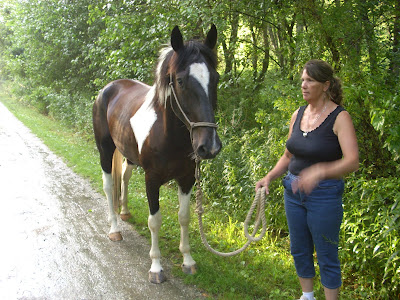 Not much fan fare for the Mason-Dixon Line, in fact there was no big sign saying Welcome to Pennsylvania. Just this little wooden sign welcoming you to the town of New Freedom. 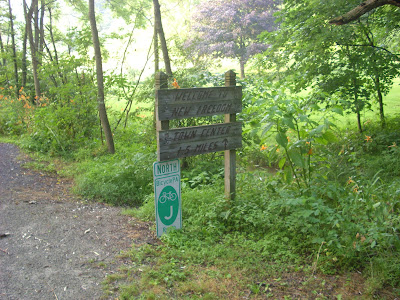 I thought I would take a picture of the start of the PA section of the trail, by this red gate which is beginning of the Heritage Rail Trail County Park. Of course, if I had more time, I would have delved into this section but it would have been hard to concentrate on riding because this part of the trail is actually side by side an active working railroad. 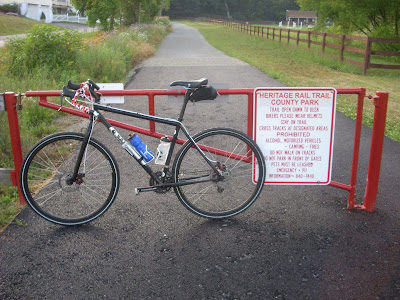 These two guys were smoking cigarettes and riding. I just don't get it, exercise and smoking. Reminds me of the time I was in Quebec and saw a guy running down the road, obviously a long distance runner in way he was dressed, smoking a cigarette. 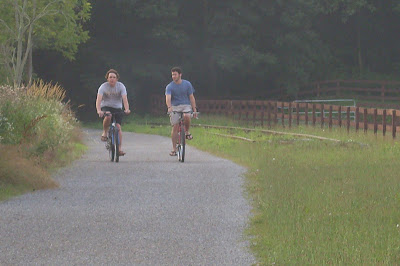 In the waning hours of daylight and for fear of having my car locked into the parking area I didn't spend any more time taking pictures and headed back down the trail towards Monkton. While the trail is primarily flat, heading south was much easier and I got up to speeds of 20 to 25 mph. There were a lot bridges along the trail that still had wooden ties on them where the rails were laid. Since this line had both north and southbound tracks, there was plenty of room for the trail and bits of railroad history sprinkled along the way. 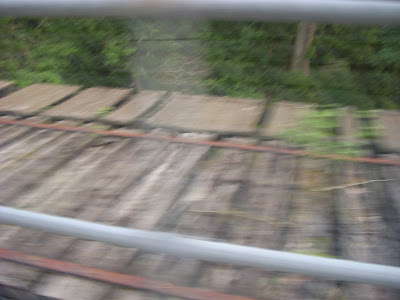 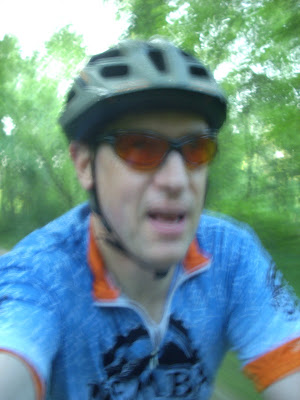 At each road crossing there was a brown gate to prevent cars from accessing the trail. You knew you were coming up to a crossing because 100 yards out you would see a Whistle Sign. 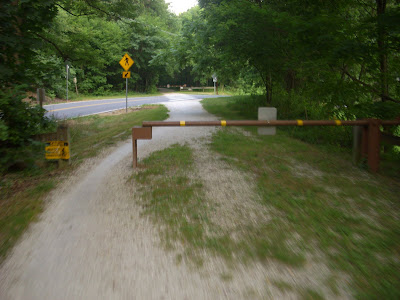 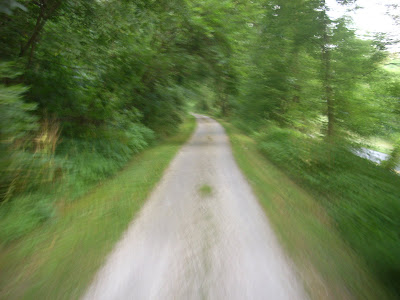 Old crossing guards still marked some of the more busier road crossings, while other crossings had the steel poles with the old fashioned Rail Road Crossing, criss cross signs, sprinkled here and there. 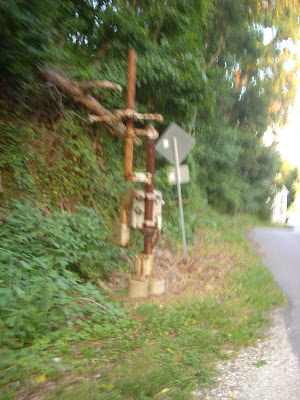 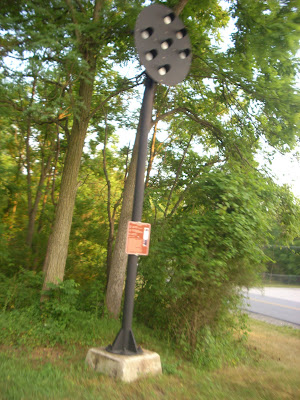 There were a few train signals still left on the trail 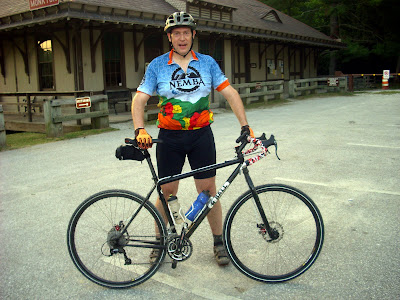 I got back to Monkton around 8 PM after being out on the trail for two hours and rode 25 miles. I loaded my GPS data to Garmin Connect. It was 55 minutes up and 42 minutes back. When I was leaving Connecticut I had it in my mind to grab some fenders thinking with all the hot weather that was expected afternoon thunder showers are generally the norm for east coast, thanks to global warming. 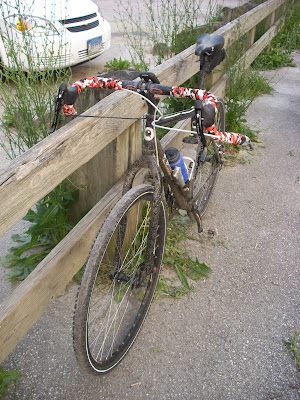 Unfortunately, I didn't bring my fenders and paid the price because on the northern section of the trail it rained. I heard thunder when I was getting ready in Monkton and on the other side of Rte 83 it had rained and I got dirty! 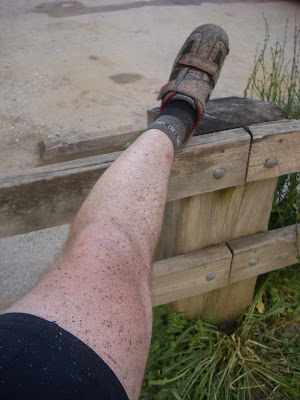 While I brought a bottle of Powerade in my official Airborne water bottle and another containing just water, the passing thunder shower and shade of the trees kept conditions really cool and I barely drank anything. Of course I had a 32 oz diluted powerade right before I went out on the trail, which probably helped my hydration levels. That is the magic of prehydrating! 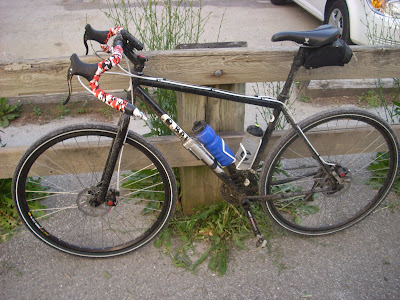