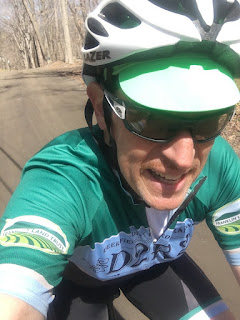 I replaced the brake pads on the Sex Machine Friday night and decided to do a Dirty Thirty around Newtown. I couldn't have asked for a better day with temperatures near 70 degrees. Only a half mile to First Dirt was on Pond Brook Road, too. 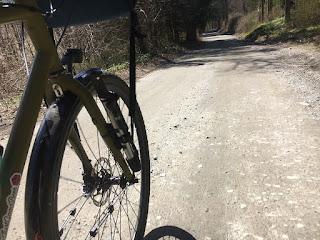 It's been over two years since the micro bursts tore through our neighborhood and I decide to ride down the old Shepaug Railroad bed to see if the Equestrians did any work to re-open the trail. 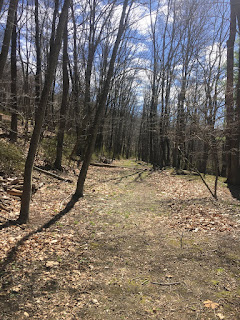 Initially it looked good. A few loan trees down here and there, some I could ride over and a few I had to get off the bike but then at one little gully there was a big tree crown that was blocking the path and then after that more and more trees were down which led me to turn around. It's too bad because this would be a great addition to the area if you could ride through here. 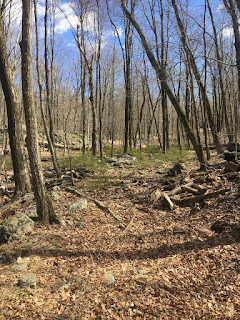 Then I headed over to Sturges Road off of Old Bethel Road. On paper it's still a town right of way but its definitely not rideable going up unless you are on a mountain bike and even that would be sketchy. Maybe it would be better coming down, still on a mountain bike. No thanks.  So, on this ride I am 0 for 2 and I am only 5 miles into the ride! 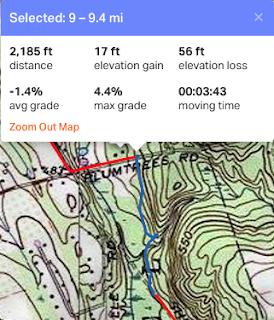 I rode over to Plum Trees Road when I passed the entrance to this little bit of open space called the Franc Preserve. Riding down the dirt road to the parking lot and found a sign with a map on it. It looked like there was a trail that connected to Newtown Forestry Association's Brunot Preserve and another to Shelly Road. I rode Brunot once 14 years ago and it was just a bunch of old ATV trails. 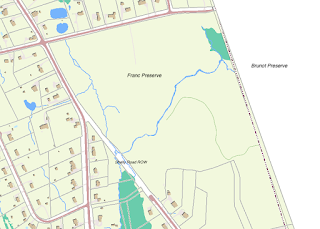 Shelly Road appears to be considered a ROW owned by Bethel that comes out on Old Hawley Road.  Looking at the map, I should have taken a picture of it because I haven't found anything online as of yet, I didn't see any no biking signs so I headed down the trail that I hoped would take me to Shelly Road. When I came to a stream there were two options, to the north a sketchy rock and lumber bridge and a nice bridge to the south but not wide enough for handlebars.  The trail seemed to have gotten a little maintenance recently and eventually came out at Shelly Road like I had hoped

So now, I am 1 for 3 on my explorations of new dirty connections. I rode up to Holcombe Hill where there was a spectacular view looking north to the foothills of the Berkshires. 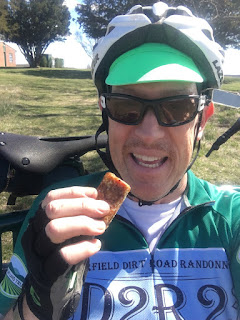 I took the opportunity, while enjoying this wonderful view, to have another one my Layla Bars. My supply is dwindling fast and thanks to the COVID-19 Pandemic Steve has suspended operations. From here I took the grass trails over to Birch Hill and the seeing a bridge in the woods headed in to cross it and then turning south I rode the Holcombe Preserve Memorial Trail. 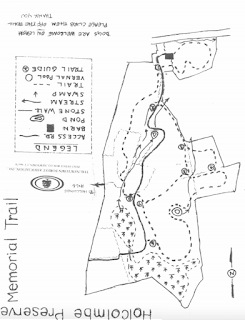 When the trail turned west again it went through a a muddy section and I found a trail not listed on the map above that went out to Partridge Lane. It was a tough trail to ride and the first part was OK but then it went through a couple of stone walls, or over them, and with a few trees down along the way made it really tough to ride. 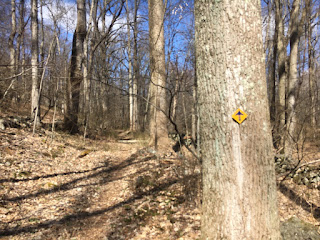 I headed over to Robin Hill and took the town trail up to the housing development that is being built. There was a new No Trespassing sing at the end of the trail signifying that the fun is over, not that the Robin Hill trail is all that fun to begin with. There are so many wet sections and trees down that riding through there is really tough. With the new sign it looks like we might need to blaze a new trail down to Sugar Street. After crossing Sugar Street, I climbed Sugar Hill Road and took the continuation of the road on the town right of way along the Shepard Property. It appears that someone with an ATV is using this ROW, I hope it's a tractor. 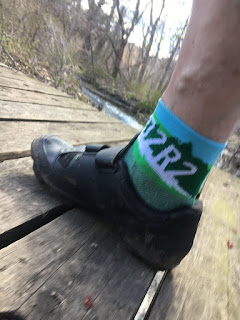 Climbing up the trail I wasn't in the right gear and I stalled and fell over. I landed on my hip and elbow and while it was smart it wasn't as bad as I thought it would be.  However, it wasn't good for the bike. I landed on the derailleur hanger side of the bike and I think I bent the hanger because shifting got really squirelly. Shaking it off I rode down to Shepard Hill and then through Fosdick and then over to Cherry Grove. Quite a few people were on the trails. 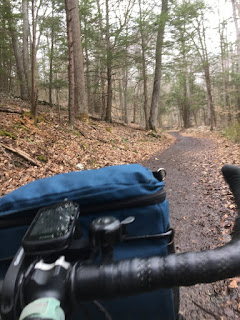 From Cherry Grove I worked my way back to town hitting as many dirt roads as possible and then road over to Upper Paugussett State Forest. Riding up the entrance just past Sydney's house there were a bunch of cars parked at the start of the Blue Trail and another car blocking road with a guy talking to the driver. I couldn't maintain proper Social Distancing space so I waited for the car to move.  Finally it did and I was off. The parking lot was jammed and people were hanging out there as well. Not cool - that kind of behavior is going to get this place shut down.  CT DEEP has already started to close parking lots for parks and forests because of this. 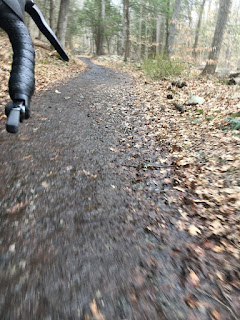 I rode up the Poly Brody and blazed through the wet section because I have fenders! Came across a few groups of walkers on the forest road, too.  At the intersection with the White Trail I met up with Sean Sheradain who rides Upper Gussy a lot on his mountain bike. Today he was taking his daughters for a hike. 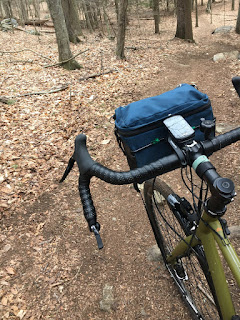 After chatting with Sean for a bit I climbed up to the Mulikin Trail Head and then descended down the forest road for a bit and then turned in on the trail that connects to the Mulikin and road the buff singletrack down and then out to Hanover Road and home.