Today was a double header. I rode with the Lunartics on Zwift in the morning. It was a good ride but I am a lot slower than them so it was harder for me to virtually (and literally) keep up. I only did it because they missed me because we can't ride to Ovens of France anymore.  We used a Discord server and it was like a conference call for work, only all of us were pedaling on our trainers. 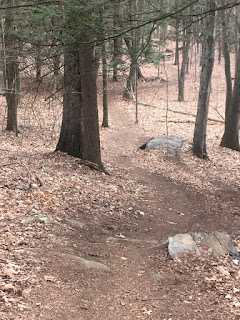 After work I headed back out to Upper Paugussett, only this time I approached the Gussy Trail from Hanover Road by riding up the Mulikin Trail. My goal, once I get the re-route done and some bridges built is to include Mulikin as the Gussy Trail, but that's a few year off.  One thing I noticed right off the bat was how clean the trail was. It looks like someone has been leaf blowing the trail.  At first I thought that it might be to all the traffic the trails are seeing since the only thing you can do outside during this time is go for a walk or hike in the woods. The fact that the run up to Flight Simulator is also cleared points to leaf blowing. 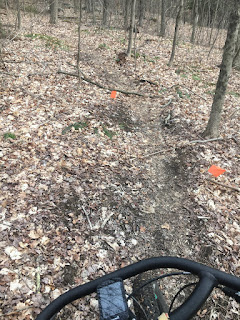 In the picture, directly above you can see where leaves have been crushed into the trail. This how the trails should look. Why, you might ask?  The crushed leaves form a moisture barrier between the underlying treadway and what ever moisture is on top of it.  Without the treadway absorbs much more water which leads to muddy trails. 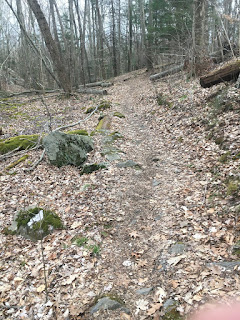 Here's another example on the Upper Gussy Trail with crushed leaves on the trail. I posted a comment in the Upper Paugussett Face Book page and someone replied that thought it was good idea because it made the trails easier to follow. I replied that its unnatural and if you want pretty trails you should go to a park, this is a forest.

Prior to hitting the Brew Crew Roller I met with Paul Cumberton riding the other direction and while we discussed various things we maintained a lot more than 6 feet separation. It was good to catch up with Paul since we both worked at GE Capital before GE sold the unit. 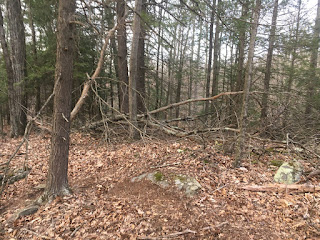 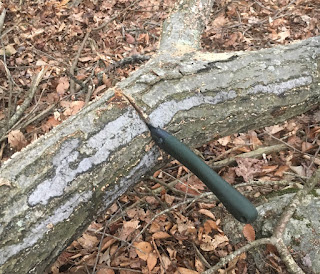 Using just a handsaw, I was able to cut up the wood so that I could move it out of the way. The bigger pieces will be basis for a nice berm, too. 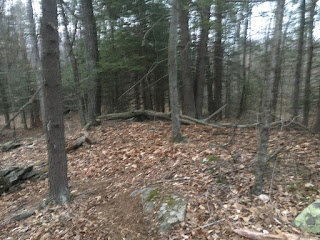 There was, however, one little casualty. On the ride up the Mulikin I stalled out and fell off the bike and hit my shin on a rock.  I know it looks bad but I barely noticed it until I got home. 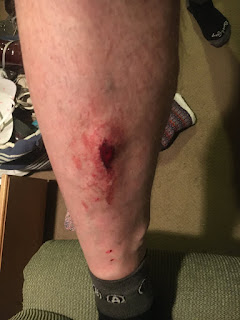