Socially Distant lunch with my Father 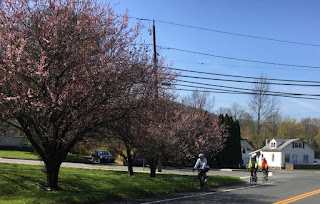 After a dismal week of cold and rain a beautiful spring arrived this Saturday and there were many cyclists out. I made plans earlier in the week to ride down to New Canaan, where my father lives, and have lunch with him. Of course, it would have to be 6 feet apart. Leaving my house, the average temperature according to Weather.com in Newtown was 45 degrees but by the time I made the climb to the war memorial it felt more like 60 degrees in the sun. 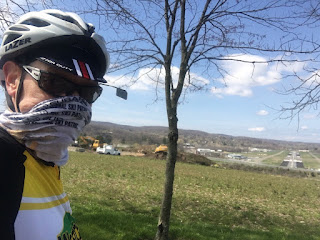 With this ride I wanted to add more miles to my Wandrer total, it's a website that tracks your road coverage and everything you have ridden, captured on a GPS. For today's route I rode through Bethel and then the back way into Danbury to Wooster Heights which over looks Danbury Airport. I was wearing my neck gaiter for when I rode near walkers and other riders, because there were a lot of folks out today with weather was so nice. 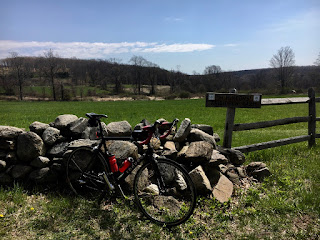 I rode up to Ridgebury, a hamlet that gets its name as the combination of Ridgefield and Danbury. Riding along George Washington Highway you can see remnants of a raised bed that was the old Ridgebury Trolley which connected this area to Danbury. 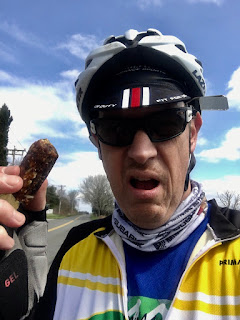 I stopped for a snack and sadly it was my last Layla Bar. 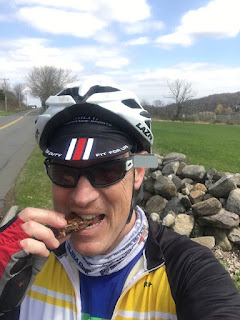 It was delicious and the perfect snack for what was to come. 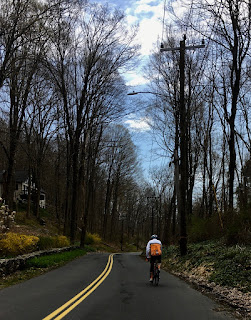 Riding through Ridgefield has its ups and downs. 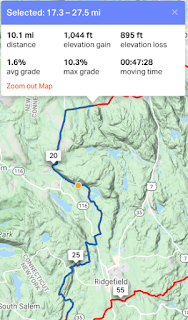 Riding from Ridgebury to Peaceable Ridge and it felt like I was climbing the whole way. 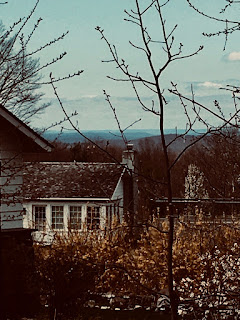 The view from Peaceable Ridge in Ridgefield was outstanding, although getting to it is a wall climb. I think the hilltop right after the house is Ward Pound Ridge Reservation and the last range way in the back could be the ridge line that includes Bear Mountain. 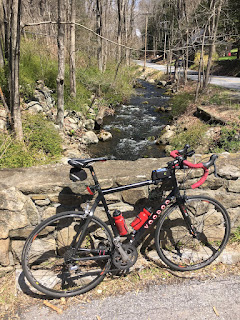 The ride down through Lewisboro and then around Trinity Lake had wonderful rollers and some epic climbs.  When first starting out, if you have a keen eye and are a train buff like me you will notice the old railroad bed that parallels Mill River Road in North Lewisboro. A friend of mine and amateur Railroad Historian, Rich Coffee did a blog post of the never completed Ridgefield and New York Railroad. Along the way I got a lot of waves from cars and few beeps in solidarity - also could have been that I was wearing my Westchester Cycling Club jersey. Ironically, however, many of the cyclists I passed thought they were too pro to wave (not). 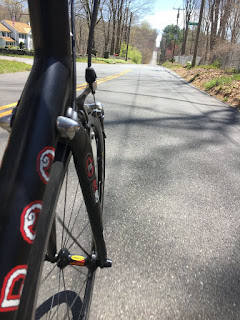 When I got on Trinity Pass Road I was in familiar territory again and now three roads away from my father's house.  From Trinity Road, I turned south on Ponus Ridge which until Greenly Road has some great rollers and fast descents. After Greenly Road there is a big climb. 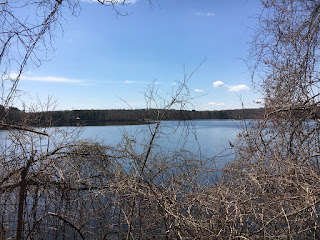 Ponus Ridge passes by the Laurel Reservoir. I heard that during last year's drought the Laurel was so empty you could see some foundations from the town that used to be there. 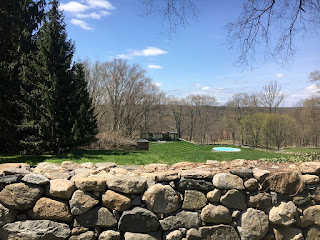 After making the climb and passing Wahackme Road there is Phillip Johnson's famous Glass House. 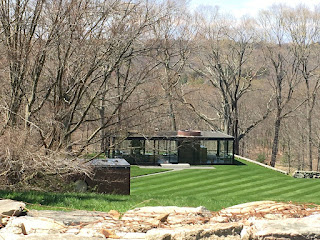 After all these years I don't think I ever saw anyone inside of it. 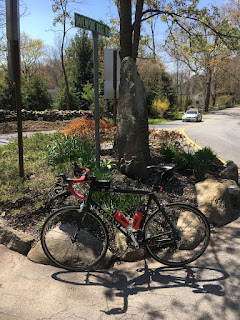 I stopped at the Chief Ponus, sachem of Rippowam. The Chief ruled over the Rippowam Tribe that inhabited New Canaan before the settlers came. According to my family's genealogy, some of those settlers were my relatives. 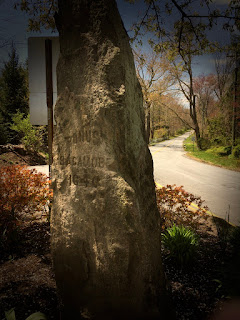 According to the New Canaan Advertiser this marker was erected in 1897. I have know it since 1979 when I moved to this neighborhood. 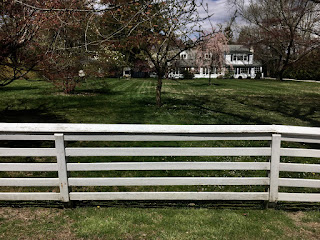 Eventually I arrived at the famous white fence that has stood on Jelliff Mill since the 1930s it front of the house I grew up in was built. Of course, its been redone and repainted numerous times through out the years since we moved here in 1979. 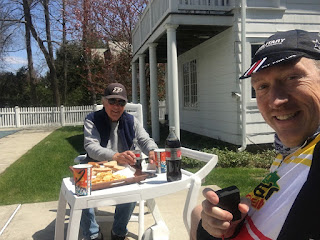 My dad made lunch and we caught up on things, like Memorial Day plans, our future fishing trip and whether Trudeau will open the border or not in time for it. Our guess is he won't since our country's leadership has mishandled the Coronavirus Pandemic so badly that I think America is going to be isolated for awhile. Fortunately, we have a back up plan. 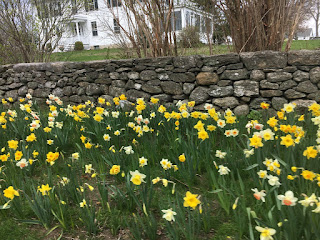 After lunch I headed home. I skirted the village of New Canaan but still had to contend with folks walking and riding around the old Thomas Watson Estate that the town took over as a park. From New Canaan, I rode back into Lewisboro and found some really nice roads, especially around the lakes and there were again, a lot of people out walking. Then I cut back over to Ridgefield and cut north on an angle heading down Florida Hill - what a cool road! 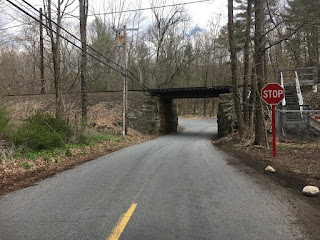 Crossing Route 7 I headed up Old Reading Road and there was quite the climb, too.  Also in Redding I took the back way up Lone Town Hill, which I think is even steeper. To get the mileage to work out to 80 miles I had to add Cherry Grove and Brushy Hill to the route. I think next week, provided the weather is good I might have to go for a full Century.

Unknown said...
This comment has been removed by a blog administrator.
5:57 AM