I thought I was running late but when I got over to my neighbor's house, he was running late himself so I rolled a few of his rocks in his driveway.  He has a killer roller that I want to try at some point.  When he got going we headed down to Pond Brook. I wanted to see if the bridge was still in the same position and it was.  We rode up the Mulikin and then took the Unmarked and Unsanctioned Trail down.  Further down the trail I noticed that a tree that was across the trail was cut.  I thought that might be a good sign for other trees that recently came down due to the recent Nor'easters. 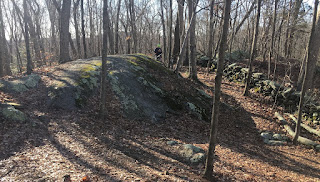 Well, the tree blocking the Brew Crew Roller was cleared but our Up and Over was changed.  All that work for naught.  Not sure why the trail gnome couldn't have left a section of the log where the up and over was but it was completely off the trail.  I guess the trail gnome did us a semi-solid. 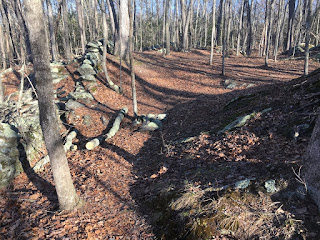 Bucky was a little saddened when we found the logs cut on the new Reach Around turns.  So was I.  While we were doing a little clearing on the trail, a large stick came down at the point of where my tire and rim come together and air from the tire started rushing out.  Of all things.  I guess that's Trail Karma for you, in reverse, I guess. 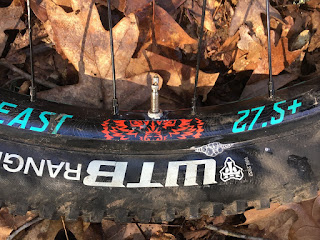 I expended a CO2 cartridge putting air back into the tire but I all I got was a gurgle. Since there was no puncture, my guess is that the stick must have knocked the bead out of the rim.  When I put more air in the Stans that collected there came out with the air because it had time to collect.  When I got home, however, I put air back in the tire and it held.  I checked it all day and it was holding fine.