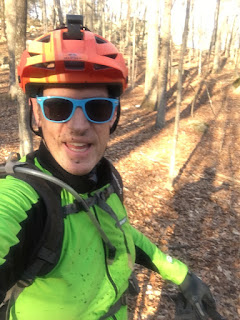 After sitting in the car for 4+ hours  (round trip) to take my son to a ski race up at Jiminy Peak where it was 25 degrees I jumped on the bike and headed out to Upper Paugussett for a quick rip before heading to a Saint Paddy's Day party. 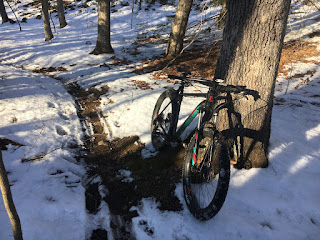 It was sloppy seconds on the Forest Road heading up to the Gussy Trail Head.  Good thing I have my fender but it doesn't do any good for the front tire.  The top of the Gussy still has a lot of snow on it and it's not really well packed down.  Of course letting some air out of my front tire helped somewhat but I am always afraid that the tire will go flat because I think the stem isn't quite sealed (sure enough, following morning the front tire was flat). 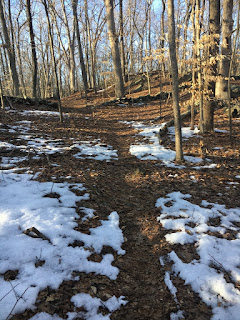 Where the trail hasn't been leaf blown it's really nice.  There's a lot of sticks on the trail but I didn't have time to play Pick Up Sticks  and I discovered a tree down over the Brew Crew Roller that is not only blocking the trail but the roller, too. 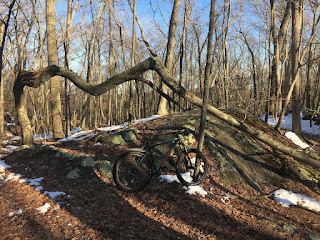 I tried riding an idea that I have for a new re-route to avoid the water that is collecting before the start of the Reach Around. I don't remember this part of the trail ever being wet in the past but with all the snow we have been having it turns out its collecting water and getting really muddy and of course the trail runs right through the middle of it. 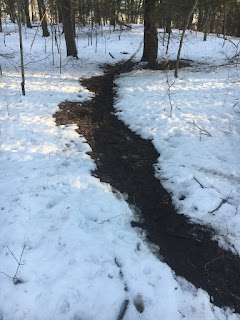 My thinking is turn back towards the center of the forest and then hook back around intersect the Reach Around further up so that it looks like the following. 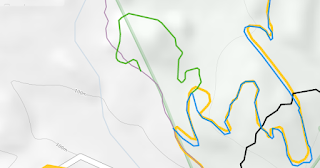 Also, I found would could be a different approach to the Saddle Roller further back that I want to open up as well.

Mark, you'll have to show me around Gussy this spring. I always get horribly lost there.

Lets do it when it dries out a bit more.