I was hoping to get out and back before the rain came Tuesday but I procrastinated too much and left a little later than I wanted but I wasn't paying attention to the time, rather the rain as it started to come down while I was waiting for the Garmin to acquire. 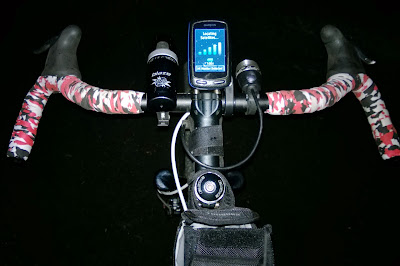 The was the first time on Qball since it's make over a couple of weeks ago and what a difference the new stem makes on the geometry of this bike.  As with all my monstercrossers I have always used happier stems and this is the first time that I tried something half cocked (to keep the analogy moving).  Riding the Qball makes me want to jump for joy like in those old Toyota commercials for "Oh what a feeling!"

Another remarkable thing is the brake levers.  Despite the extreme angle alignment to the bars I can still hold onto them like hoods that are more perpendicular to the road.  They never moved the whole time including quite a few times where I was climbing out of the saddle. 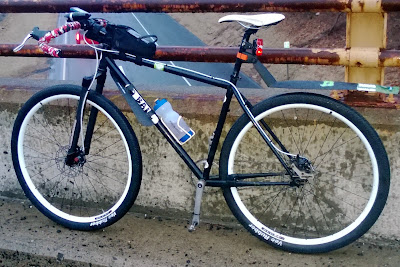 The Vee Rubber tires are also awesome!  A little bit of road noise but the extra volume of a 50c tire really makes the ride plush.  Their tenure on the Monstercross might be short lived because I called Surly Bikes today to find out more details on a new chain tensioner for the Cross Check that they will be introducing next month called the Hurdy Gurdy. They asked what type of QR I have on there now and I told them an XTR.  That's when Bob, Tzar of AntiSocial Media, Harley Riding Deer Destroyer, told me to try an older QR axle, the type that is smooth on the ends because the inside of them have an uneven surface and will hold much better that the lightweight, modern, QRs.  I have a million of those so if that works, the Vee Rubber is coming back to the Cross Check!  Still might get the Hurdy anyway just to be safe. 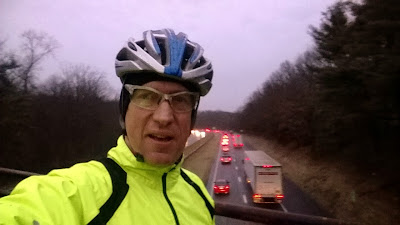 Knowing that it was probably going to rain I threw on my riding jacket and discovered that it's much better than wearing 3 or 4 layers.  I was able to get away with just two layers underneath and with the zip pits wide open I never got overheated.  Ironically it was the same temperature as Sunday only no wind. 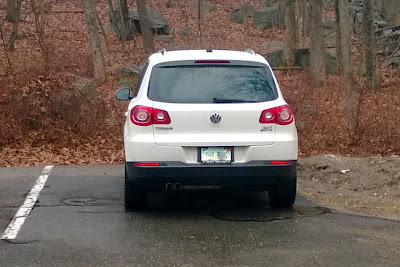 I was JRA on Boggs Hill when I hear this car zoom up behind me and then slow down because of limited site for oncoming traffic.  I kept as far over as possible but got the feeling this Mentally Challenged Driver was right on my tail.  Finally he could see down the road and it was safe to pass but when he did so he arrogantly laid on the horn as he zoomed past.  Of course, I gave him a prominent one-fingered salute.  Then a mile down the road I spot the same car that passed parked at the Elementary School on this road.  Looks like the dolboeb was late to work.  Thanks for nearly running me off the road!
at 7:00 AM