The Connecticut Chapter of New England Mountain Bike Association had it's annual Fall Fiesta at Gay City State Park on Sunday, September 29th and you couldn't ask for a better day to ride!  Coming off the cold week the fall colors were resplendent and the temperature by ride time was already in the upper 60s. 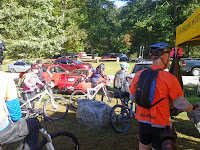 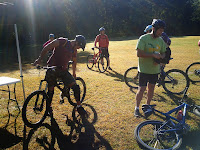 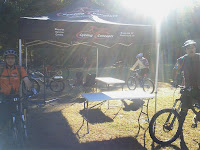 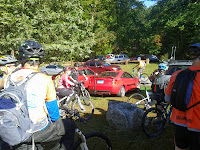 Cycling Concepts of Glastonbury was on hand providing Tech Support and donated a ton of swag for the raffle!  They are a great shop and promote quite a few interesting rides, of the roadie variety, that I am going to have to try next year, like the two ferry ride. 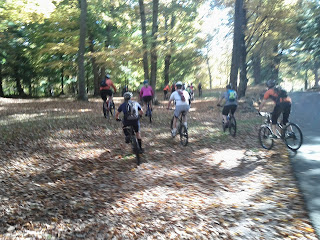 The advanced and the intermellow ride took off at the same time and there most have been 40 riders in the combined group.  It got a little tense at the first climb when the conga line came to a screeching halt when someone couldn't pedal up the short climb paralleling Route 85 and the ire of some of the advanced riders bringing up the rear could be felt. 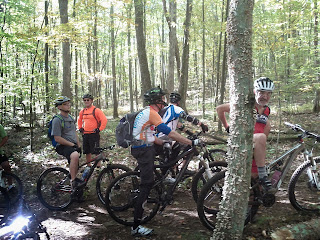 The two groups broke off from one another after the bridge on the north end of the park.  I stayed with the advanced group because they were going into Case Mountain and were going to ride a new trail that recently popped up near the Birch Mountain side of Case.  The other group was headed over to the Ribbon Trail. 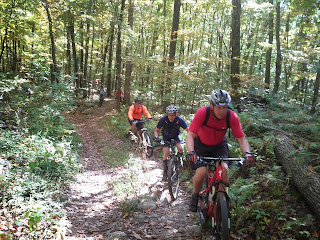 We met up with the slower group one of the climbs prior to the turn off to the Ribbon Trail. 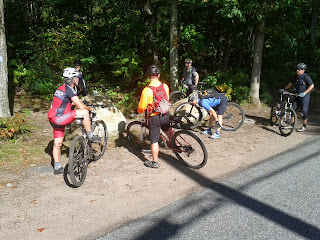 Rest stop on Birch Mountain Road before hitting the good stuff!  At first everyone thought that one woman, seen bent over in the picture above, was twerking, but she was actually stretching.  Another guy was stretching, too, but he looked like he was puking.


The section we rode into Case Mountain can be seen in Blue on the map below.  Basically we went down the Fern Trail (always rode up it in the past) and then hit the new trail, which doesn't really have a concrete name.  Some are calling it the Fern Trail 2 or Second Fern Trail.  There is a Strava Segment for part of the trail called Shank Juice.  I was out of my league with this group and left in their dust. 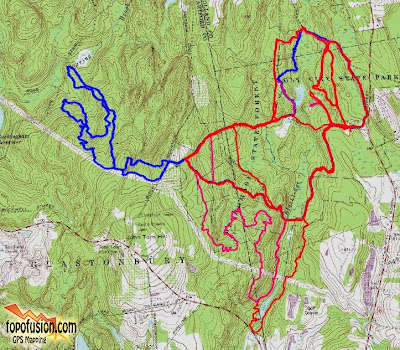 We rode back to Gay City on the power line access road and I contemplated hitting the Ribbon Trail (In Pink) but didn't think I was going to last so I bailed.  Still the ride back was pretty tough.  Not sure what happened to my endurance, guess I have been riding roads, too, much which seems to have slowed me down in the woods a bit. 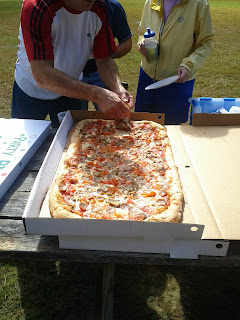 At the end of the ride was the pizza!