I still can't get over how awesome this bike turned out and I took it for a test ride around the neighborhood the other day and realized that it is one sweet bike and also how much I miss riding a fixie.  Before venturing DOWN the driveway (brakeless) there was something that was amiss in the cockpit - I needed to still raise my seat.  Now everything felt good and off I went. 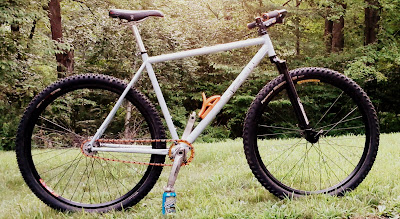 The test ride was smooth as butter, granted the road was flat but it gave me a sense of freedom as I pedaled through the neighborhood.  I even stopped at a neighbor's house whose son I gave a bike to last year because my kids weren't riding it to see how he was doing with it.  He showed me how he taught himself how to ride over logs!  I taught him how to ride a skinny.  He was pleased as punch with himself.


The euphoria is going to wear off at some point when I actually take this out to some dirt.  I am debating whether or not to add a brake or try riding it this way on a local dirt rail trail.  Inevitably a brake will be added but for now it's nice to appreciate the svelte looks of a rugged, yet simple bike.