2012 KIC IT Triathlon: Corporate Team Relay - Just for the Fun of it!

With an Oh Dark hundred wake up, I met my co-worker,  Stephen Badger at 4:45 am at the Exit 9 commuter lot and we headed down to Stamford, CT.   We were participating in the Corporate Relay event for the KIC IT Triathlon and this was a first for me. 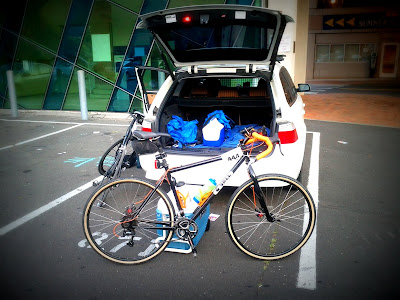 The Qball was ready to roll.  Rigged as a geared Cyclocross bike I knew the bike would stand up to the race.  Probably the only steel bike on the course but it has a lot of class.  Probably the only bike that has been a single speed, fixed geared, and geared mountain bike, as well as a Monster Crosser and commuter. 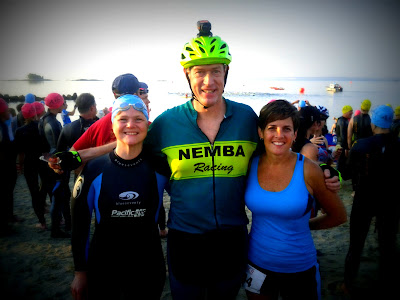 These are my team makes, Bari (l) and Krissy (r).  As you can see, I brought the helmet cam so it will be interesting to see what kind of footage I was able to capture. 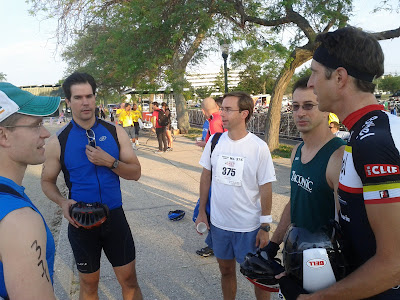 Pictured here are more of the corporate racers from my team.  Stephen is on the far right.
It began with the swim.  Bari came running in we transferred the radio tag and then I was off.

The first part of the course was out and back on Shippan Ave.  Stephen passed me and he was flying!

From Shippan Ave, it was up to East Main where I saw one rider down who got hit by a car that pulled out.  He wasn't getting up. Then through the center of town and then out towards the west side of Stamford.  I was catching up and passing a lot of people but most of these people were doing the whole triathlon and there was no comparison.  Their cajones were much bigger than mine.  My team came in 44th out of 49 Corporate Relay Teams, and 25th out of 29 of the Corporate Relay Teams that were mixed, comprised of men and women.  I was ranked 28th for my ride with a time of 1:29:51 and average speed of 16.6, which make me happy!  Just think if I really trained for this and had a lighter bike.  Well, there is always next year and I can't wait.

I have a lot more video to edit so for now I will leave you with these two and try to get out an edited overall version soon.
at 10:18 PM

Email ThisBlogThis!Share to TwitterShare to FacebookShare to Pinterest
Labels: KIC IT Triathalon, Qball