Today's ride was the reverse of what I did on Saturday's Broken Spoke ride only with modifications to the route and threw in a new challenge at Stephen Badger's suggestion, a 12% climb up Town Line Rd from Bridgewater to Roxbury.  Riding in the other direction up Purchase Brook was a great, steady climb, that I was able to manage quite well.  However, in the flats prior to the hill I got passed by tri-geek who didn't have the courtesy to give me any warning that he was over taking me, compared to the roadies that passed me later who were nice enough give a hello or warning that they were there. 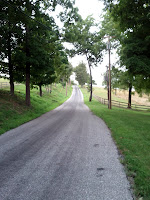 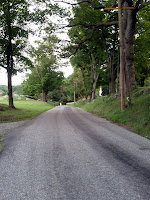 I think I might have figured out how I broke the spoke on the last ride.  It seems when you climb, the slower you are going puts more weight on each spoke because the wheel has more contact time with the pavement but if you were going faster that time is greatly decreased.  I could hear my spokes twinging as I climbed and because of that pressure at slower speeds due to all the weight pushing down on it combined with the fact that it was a cheap wheelset (you said so yourself, Thom) means some failure is bound to happen, which it did.  Definitely, going to have to get the spokes tightened.  The On-One rear wheel, however, worked out nicely. 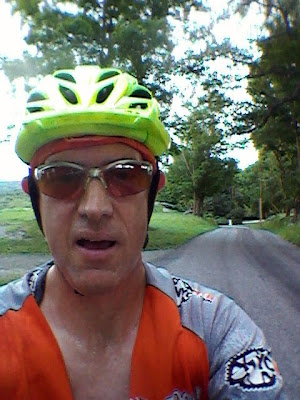 Town Line Rd was definitely a bitch but it wasn't a kick in the balls like I thought it was going to be and in fact could have made it all the way up without stopping only I dropped my BlackBerry as I was trying to pull out my Droid from my frame pack.  The surprising thing is with all this climbing today, not once did my HR alarm go off compared to last Saturday's ride, I went into the red zone three times.  I think I am definitely already starting to feel the benefits of this type of training.  Heck, with a real road bike, some fancy kit, and a ton of hair gel I might even be able to give Stephen Badger a run for his money! 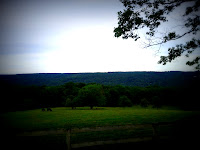 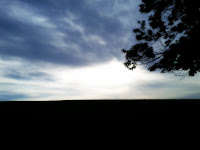 Once atop Town Line Rd the views, especially looking east were incredible.  I should have asked the two women who cruised me in the cream colored VW bug convertible, in both directions, if they would take my picture or take a picture with me but I wasn't thinking.  One thing is for sure, don't ride this hill from the other direction because there are sections even steeper than the way I rode.  My route took me back down River Road and to my surprise was dirt which is the perfect surface for the way I build the Qball Monster Crosser, which got me thinking, I could throw the Shepaug railtrail into the ride the next time and bang out a little single track while getting back to Minors Bridge.  Next time! 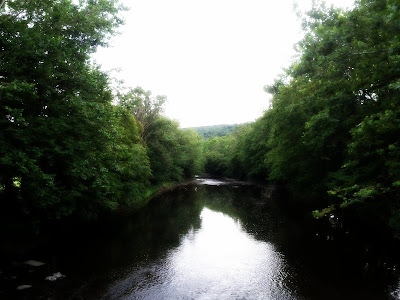 The new route only added 25 minutes to the route I did last Saturday.  If I can hit the road early enough on Saturdays and stop farting around taking pictures I could probably start doing this route every Saturday morning from 6 to 8 am and at least I know that if I am running short of time, I can cut out the loop on Town Line Rd for a quicker return.  I think what I will have to try next, when I have more time, is after Town Line Rd riding into Roxbury Center and then up Judges Bridge and Walker Brook, back down through Steep Rock (on the rail trail of course) maybe up behind Mine Hill and down the Shepaug Rail Trail, and back onto my loop.  Now that could be the ultimate Monster Cross Ride for this area which could be as much as 50% dirt!
at 6:27 AM