My last ride of this decade was fantastic. Two inches of fresh powdery snow had already fallen by the time I got to the Upper Dodgingtown lot at Huntington State Park in Bethel. Met up with some friends from CT NEMBA and off we went. The combination of all the rain and then frigid temps earlier this week created some really tricky spots while riding down the closed section of Old Dodgingtown Road toward the Big Burn but once in the Singletrack all those fears melted away. 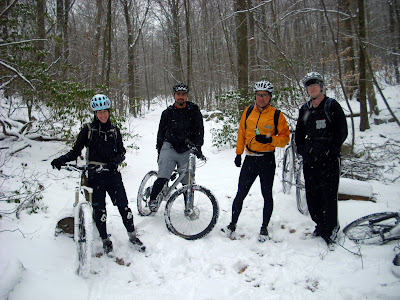 Six people started out, Paula (not pictured), and from left to right: Heather, Brendan, Glenn, and Dexter. I posted the ride on the CT forum for NEMBA at the last minute to see if any other members wanted to join and that's how Dexter found out about it. 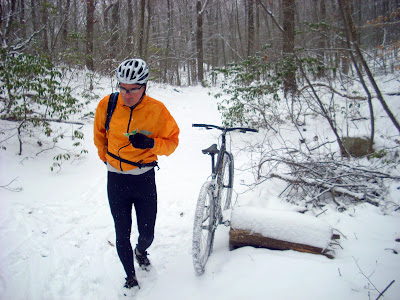 There was another single speed, rigid, 29er on this ride, a redline D440 ridden by Glenn (in orange). Everyone else were riding full suspension bikes. Here and there traction was sketchy but I was able to climb just about everything, there were a few times, however, where lower gears would have been nicer. I was riding the Dillinger in order to break 100 trail miles on it on this ride and that was accomplished. The new tires are really grippy, especially in the snow. 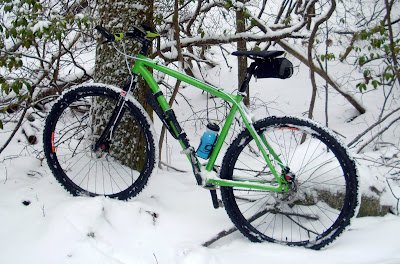 I know I look a little chubby in the picture below but that's because I had a extra pair of gloves and my over booties stuff into my jacket. The booties kept coming off because I didn't have them on tight enough and my feet were plenty warm, anyway. At first I was wishing I had brought the lobster gloves because my hands were freezing for the first 5 minutes of the ride but then they warmed up when we got into the single track of the big burn. 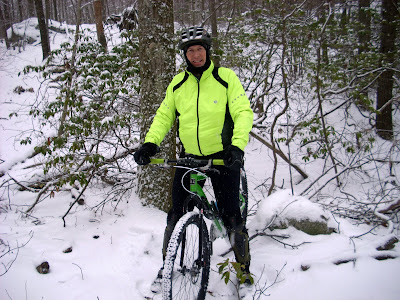 Here is a little clip of my riding the Dillinger across one of the earthen dams at Huntington. Afterwards I headed up to the Rock and Roll Trail head and then headed south into the woods to start scouting a new trail that I have permission to start marking. I plan on extending the Rock and Roll to hook up with the South Pond Trail and also connect with single track on the east side of South Pond.
Check out the CT NEMBA blog for more pictures of today's ride
at 6:39 PM