Seen in the Park City 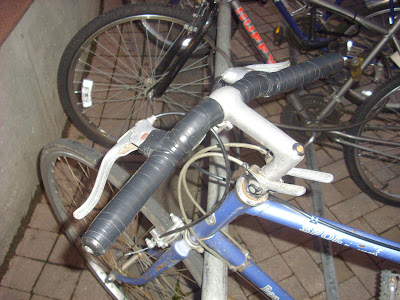 This Park City is Bridgeport, CT. This is where I grab Metro North when I need to be in the NYC for a meeting. I had been meaning to bring the camera and capture some of the interesting bikes found at the Train Station and there were a couple. Take for instance this Panasonic Sport with the fixie-esque appearance with the flat bars. Most noteably is the electrical "bar" tape. Maybe this guy thought when cyclists refer to "tape" as in bar tape he figured any tape will do. 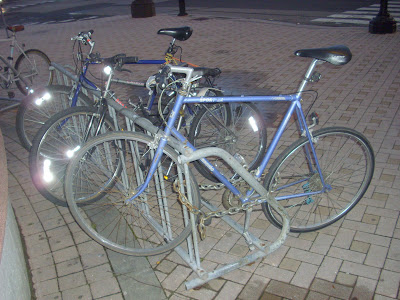 Here is a classic Special-Ed Rockhopper that I would guess by the logos that it might be from 1983 or 1984. Now that is a classic bike - just look at that head tube angle! I bet everything is original on this bike and too bad it's being used as a commuter. It should be hitting the singletrack at Pequonnock River Valley old school style! 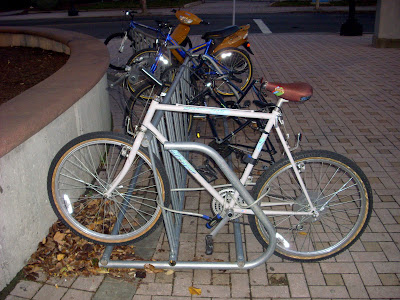 Another modification of necessity is this foul weather fender, which appears to be made out some plastic material that is anyone's guess. It's been zip tied and secured with a coat hanger. Very interesting concept. Behind it a Diamondback Topanga with a enough bungee cords to go bungee jumping off a low bridge somewhere. 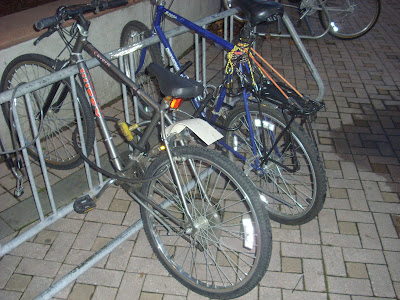 That Rockhopper looks to be in pretty good shape!

Yes it is, everything looks original. I wouldn't mind adding it to my collection.