Day 6: Life without my Edge; Two 'Horses at Huntington 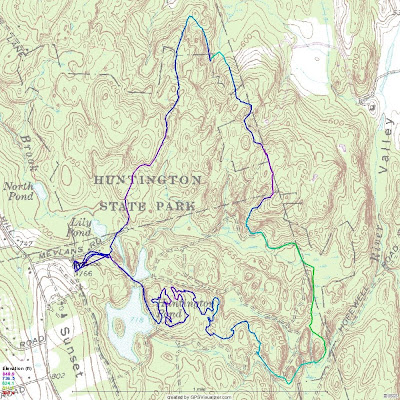 I wanted to ride after work yesterday and brought the 'Horse to work because it was shaping up to be a nice day. That is until another shower passed through. At least the bike was getting cleaned. Headed over to Brookfield Bike to get a cycloputer installed. Since I will be reverting back to my Garmin GPSMAP60 the chance of getting a lost signal remains high that it would be smart if that if I am a true data whore that I should have a back up.
Well, I didn't ride afterall on Friday, instead I met Pete, fellow cycling blogger, mountain biker, fixed gear biker, at Huntington for a two hour ride. He has a newer 'Horse MKIII set up the same as mine, only he has SRAM components.
We headed right away to the new trail but with the previous evening's rain (monsoon) all the challenging parts were really slick and I walked through a few of them so as not to have a repeat experience from a few weeks ago. Which by the way, my fears of a tear are largely dimished because it's healing so quickly. I think it was just a bad pull.
The new trail, it really doesn't have a name so it's hard to describe it, other than the new trail. I guess you call it the new, illegal trail, since it was built without the knowledge of the Land Manager. That's it, the New, Illegal Trail, built by the trail gnomes who like to ride at Ninham. That last part is purely supposition. 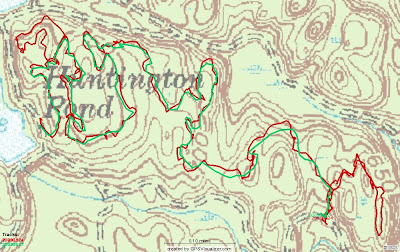 The trail has a nice flow to it and reminds me a lot of the Black Diamond Trail at Wilton Woods but the builders still need to learn and thing or two about trail building. Just because you are great mountain biker and ride a lot of trails doesn't mean you actually know how to build them. For example most of the ascents go up the fall line and not on an angle. There are sections where water pools and can't drain, thus creating a mud bog. On the red track above that off shoot loop goes to a nice overlook facing Newtown. 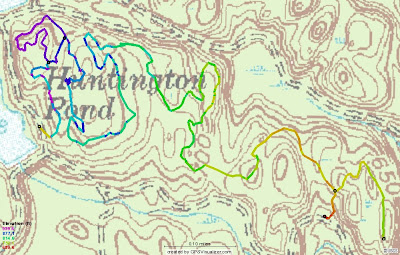 The map above is a smoothed version of the two tracks. The trail is very technical and has some amazing rock gardens. Besides the need for benching and armoring, as well as a few necessary re-routes because the trail goes up a fall line or three, it is a nice change of pace to the rest of the park.
Here is Pete and his 'Horse. He had a similar problem with his rear wheel, only the rear hub siezed altogether. His shop rebuilt his but RS Cycle, where he got the bike, shipped him and entire new wheel, for free. How's that for Customer Service! 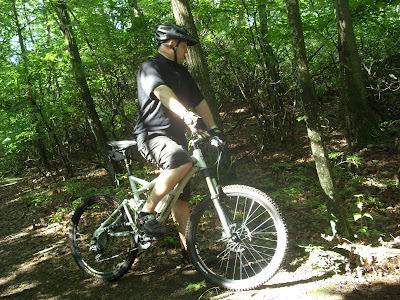 As for my missing GPS, so far I haven't heared from anyone yet. Put up some flyers on telephone poles around the Dodgingtown Lot and another at the Kiosk, only to find it missing when I returned from my ride - caretakers? After the ride, I drove down Sunset Hill and passed out flyers to everyone walking their dogs and put more up at various intersections. I even spoke to a very nice woman on horseback, with a lot of tatoos who said she saw my Craigslist posts and said she would try to help me out. I thanked her but forgot to ask her name. 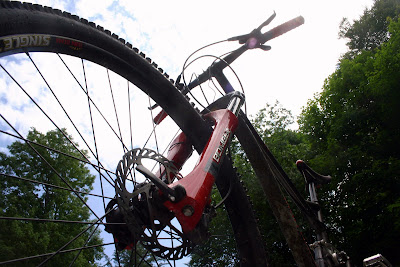 Back at the house, I tried to take some pictures of both my dirty 'Horse and something we haven't seen in awhile, blue sky! I don't think the dirt really showed up well but you can certainly tell that is blue sky! 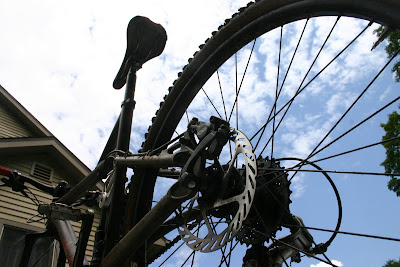