CT NEMBA's Happening at Huntington happened today, believe it or not, because it has been raining on the East Coast so much you would think we moved to the land of liquid sunshine, the Pacific Northwest. 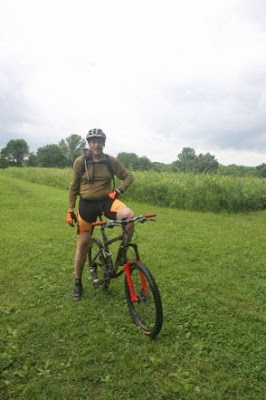 As you have probably noticed, the Snack has been a little thin this past week. The weather and my injury have been largely responsible. Despite the muscle strain/pull in the forearm I decided to ride anyway. I did spin class earlier this week and had no trouble with it so I figured what the heck, as long as I stick to the carriage roads mostly and try to get a 5+ mile ride in I should be find. In fact I really didn't have any pain at all, except from time to time while shifting.
I started off riding with this guy Steve but he took a header on a slippery rock while we were bombing down a carriage road and he decided to head home after a quick loop on the single track that comes off the the blue trail. 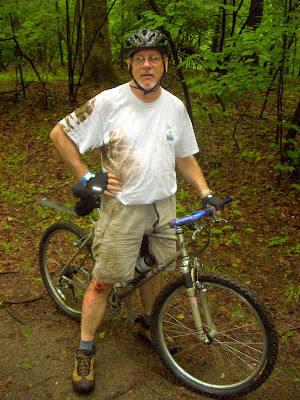 I rode the blue until it splits off (turns into Big Vomit) and headed up the white to the green and took a shot at Little Vomit. Had to do it in stages (which means I stopped a few times along the way) because it was so slick that I spun out while hammering Granny. I think if it were drier I could actually ride it. On the way down I noticed that Big Vomit might actually be easier to climb. I wonder if I have them confused now.

I headed back to the white trail and actually caught up to one of the led rides. Actually it looked like a CT NEMBA Trail Ambassador ride with all the orange jerseys. 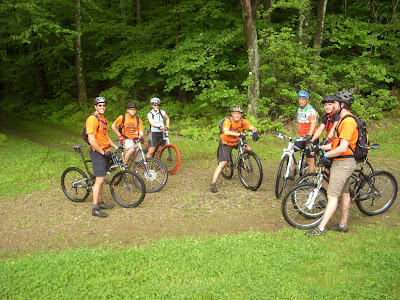 Pictured from left to right: Tren "Big Daddy" Spence, Eric "eMoney" Mayhew, Mandy "the Rock" Mayhew, Al Tiniti (famous trail builder from the east side of the river and creator of the Tinti Trail), his buddy whom I always forget his name, Steve Bennett, and Nathan Lundstrum who is the author of the blog Amble On.

From there I hammered back to the lot. In my rush to go pick up the Subs from Subway I put my Garmin Edge on the bumper of my car while I was putting the bike on top of the car and I forgot to put it in the car when when I changed. I was looking right at it but I was in such a rush that I forgot to throw it in the back of the car. When I pulled out of the lot I think it fell off the bumber. In fact, someone picked it up, a dog walker is my guess, and asked if anyone lost a GPS but no one knew at this point I lost mine.

When I got home, I made a post on Craigslist and subsequently called the police departments of both Redding and Bethel and left my contact information in case someone turns it in. Tomorrow, I am going to post some lost flyers on the signs posts around the entrance to the park and might even try going door to door along Sunset Hill to see if anyone has it.
Wish me luck. Not having my Edge is almost like not having the mojo to ride. I have become such a data monger for miles and mapping that the Edge provides I just don't know how I can ride with out it.
at 7:49 PM

that suks although sort of ironic :(