The Northern Recreational Rail Trail, also known as the Northern Rail Trail, is a 58-mile multi-use rail trail in western New Hampshire, USA, running from Lebanon to Boscawen. It uses the right-of-way of the Boston and Maine Railroad's former Northern Line, which was acquired by the State of New Hampshire in 1996. - Wikipedia 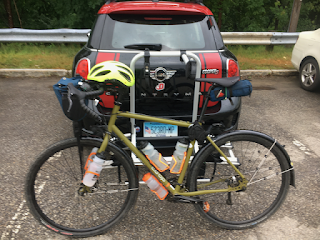 My goal for this ride was to ride the entire length of the trail from Boscawen to Lebanon and back. I decided to go with 5 water bottles for this trip because in my reconnoiter of the route I didn't see many places to stop near the trail and didn't want to be caught short. The weather report wasn't looking good either, there was 60% chance of rain today so I was glad for the fenders and I brought a rain jacket, too. 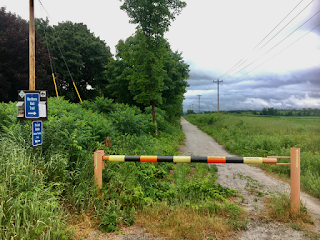 I parked at the Park & Ride in Boscowen because it had a trail that lead down to River Road. Head up River Road for a half mile and you come to the trail head. Looking north at the clouds meant I was probably going to get some rain.

As I was riding along I came upon a couple that was walking hand in hand on the trail. They were older but what struck me was that the man had what looked like a 9mm pistol in the back waistband of his pants. It seemed that this guy might be taking the State motto a little too seriously. I did stop and ask what was the need to be carrying a weapon and he simply said for predators. I asked should I be concerned and he replied that I could probably out run anything on my bike. Still I thought that was a little crazy. Turns out there was a prison nearby so perhaps he was afraid of encountering a escaped convict. 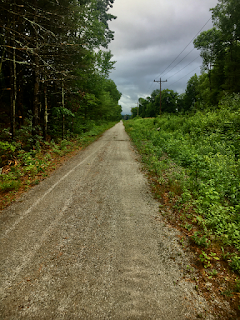 It sure does look like rain is coming my way. 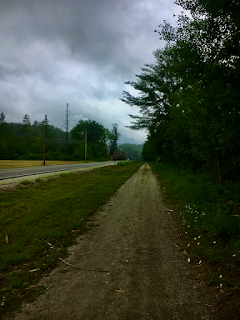 40 minutes into the ride it did rain but it was a brief shower and I just rode through it. 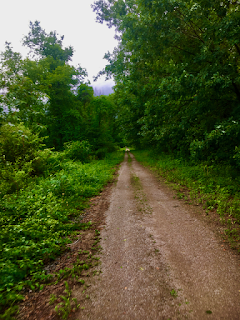 I knew from yesterday the back tire I was riding on, a Schwalbe Land Cruiser was OK for a gravel ride running at 60 psi but this ride I needed a tire that could take more pressure because it felt like it was slowing me down. I felt like I could have used 75 to 80 psi in my tires for this ride. 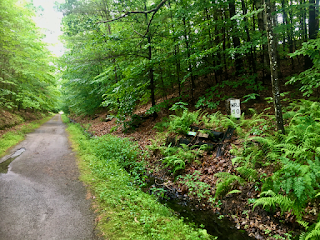 Every mile along the route there was a concrete post with the letters WRJ and a number on it. After a couple of miles I realized that it meant White River Junction and it was a mile post counting down the miles till the junction. 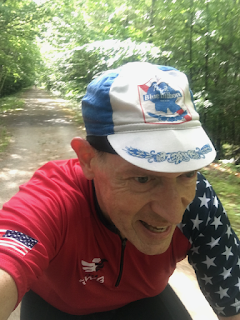 I usually always ride with a helmet but I figured since the trail was soft that I could go without for a while. It made the ride a lot more cooler when it was sunny. 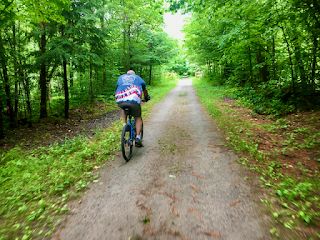 For the whole ride, this was the only cyclist I came across. 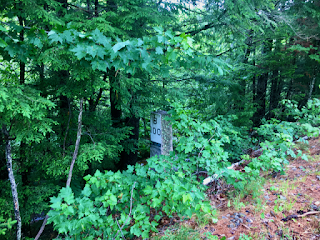 At the 47th mile post headed to White River Junction is what I calculated would be the marker for 100 miles to Boston. 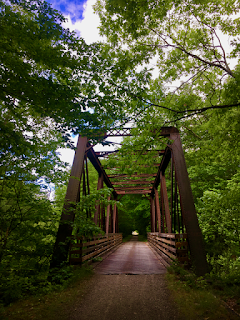 There were a few bridges along the route but this was the first trestle. 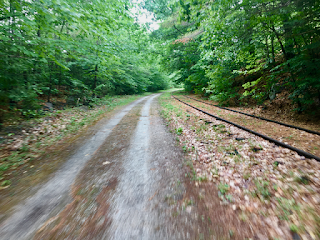 Coming into Potter Place in Andover, NH is the first sign of some railroad remnants along the trail 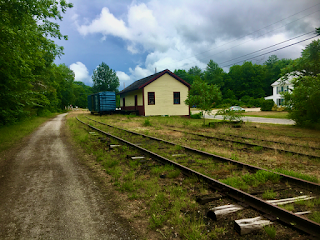 There is a nice freight depot 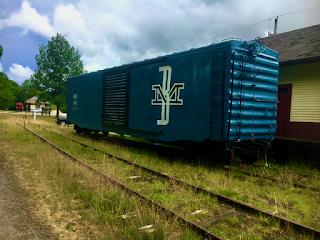 With a Boston & Maine box car 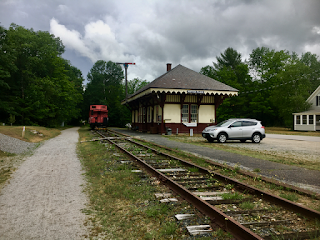 The Potter Place Station has been nicely redone 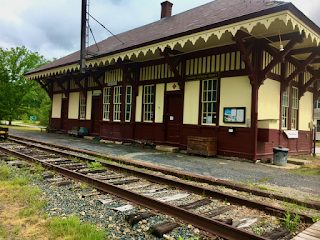 And there is a caboose right next to it 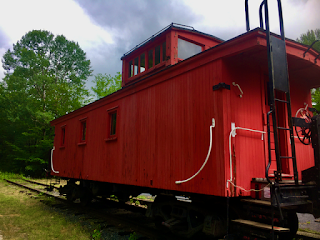 Shortly after Potter Place it started to rain 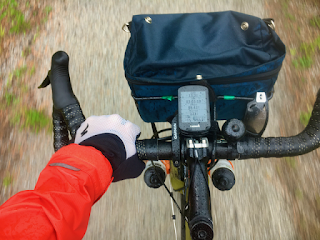 I stopped to put on my rain jacket and then it really started coming down. 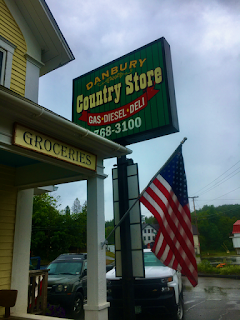 I got off the trail to look for a dry place to assess the weather and saw on the radar that more rain, and much heavier rain, was coming my way, so I turned around. 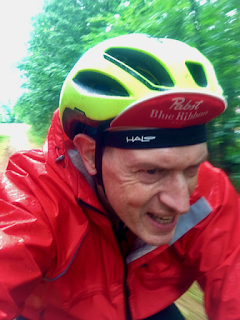 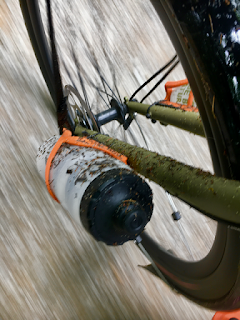 Bottles were getting gross though. 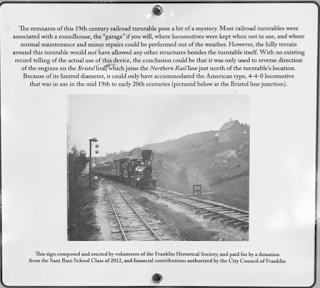 From the parts that I rode there were two other places where there were some old railroad remnants. This is a former turn table for branch line that met the main line. 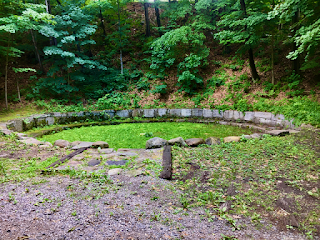 On the east side of the ROW there is also remnants of a depot in West Franklin. The is where the branch line from Bristol came in. As you ride north you can even see the old grade that came up to meet the main. 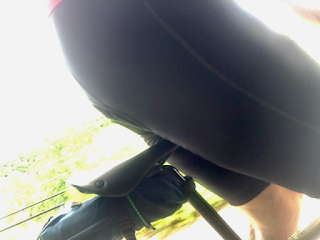 Not sure if it was due to the rain or just two days riding on the Brooks Cambriam saddle but my fourth point of contact was sore.  I am going to have to reassess this saddle. 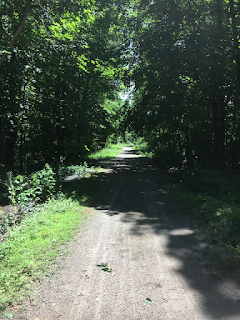 It got sunny again! 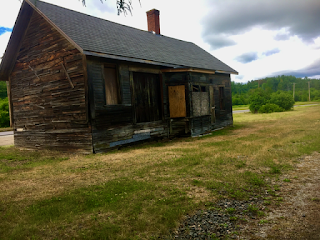 This is the only other railroad remnant that I saw on my ride, besides the markers, Gerrish Depot. 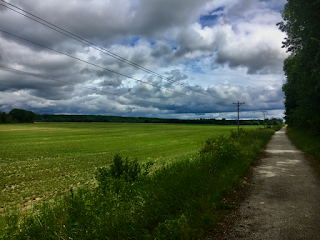 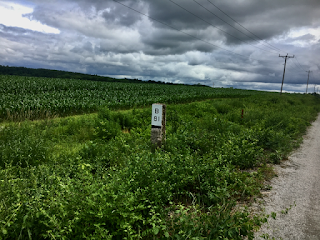 This is the last stone marker before the end of the trail.

I only got 32 miles down the rail trail before I turned around. I think I am going to have to come back and try it again. Only this time, ride the length of the trail and then ride gravel roads on the return route. I will probably start from Lebanon. Not sure whether I will ride the rail trail down and then dirt roads back or vice-a-versa as of yet, but I am coming back!