For my birthday in February, I purchased this singlespeed frameset from State Bicycle Co. My company added a new cycling team event in addition to the CT Challenge this year, the 5 Boro Bike Tour of Manhattan, and I decided I would build up a singlespeed for this event and other charity rides that I like to do throughout the year that don't have an insane amount of climbing. 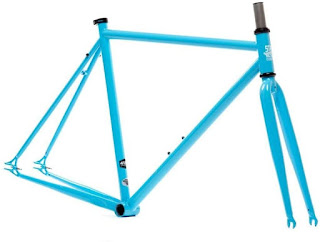 It came with a headset and a seatpost collar. The selling point for me, however, was the drops because they have built in tensioners. There were a few drawbacks to this frame. The steering tube came pre-cut and since it was a 59 cm frame with a lower profile it meant that I was going to have to run a longer stem and one thing that I didn't realize is that I would need a stem with a greater rise. It also only comes with one bottle cage mount but I plan on riding some distances on this bike so I am going to have to figure out the best way to add cages without spoiling the look. 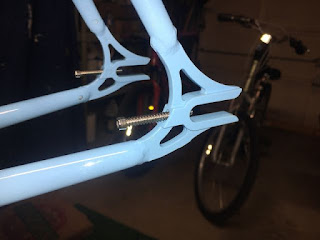 My plan was to try and use as many parts from my box of tricks as possible and then upgrade things as needed. 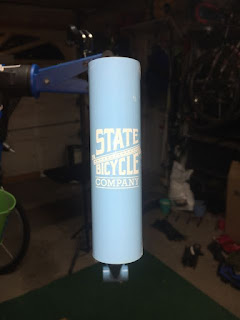 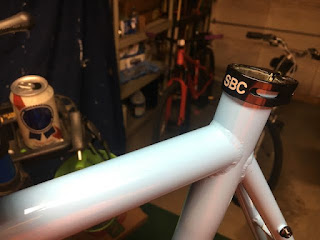 Comes with a seatpost collar. 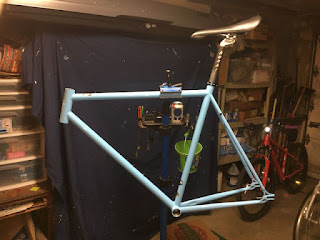 First, I added this seatpost and saddle someone gave me a few years ago. 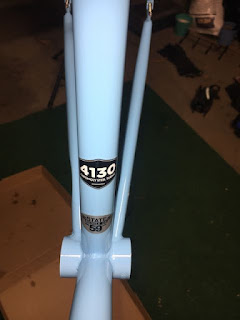 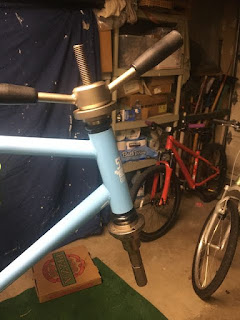 I borrowed Brad's headset installer and installed the cups 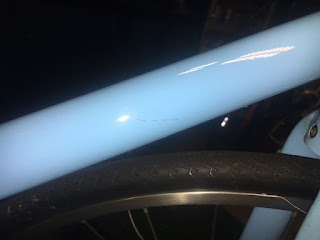 Well into the build process I noticed this scratch on the frame. There were other dings and blemishes on the frame as well. I contacted State Bicycle and said rather than go to the trouble of sending me a new frame and sending back this one why not send me some parts. They agreed and sent me bullhorns and a stem. I really wanted to use them but the bar ends were the wrong diameter for bar end brakes so I went with my own parts. 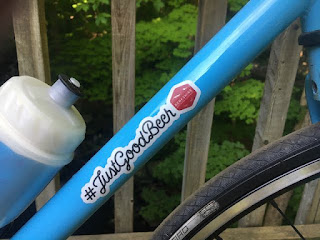 When I discovered the scratch the first thing I thought was to find some way to cover it up and then I remembered I used a sticker that I got from the Berkshire Brewing Company last summer while working at D2R2 and thought it would look awesome on the bike. I sent BBC a self addressed stamped envelope and a month later I got a bunch of stickers including these #JustGoodBeer ones that I used on both sides of the down tubes, and thus covering the scratch. 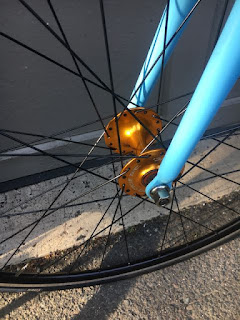 I also had these IRO hubs that I have had for 10 years finally laced up on some Alex rims. 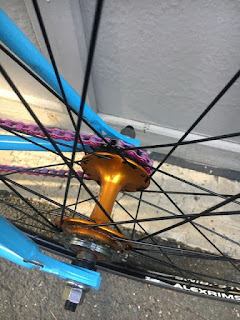 Ended up going with 16t freewheel and a 15t fixed gear. 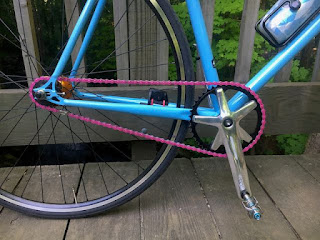 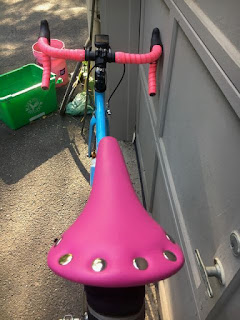 Ended up getting a pink Retrospect saddle and Lizard Skin bar tape. Pink was my daughter's idea and it really looks good. 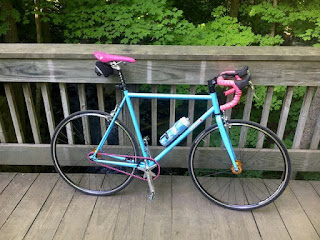