Last weekend Will emailed and was interested in doing some riding on Bastille Day (July 14) so I suggest that we meet at the Depot Deli in Copake Falls at 7 AM.  I live an hour and half from there so I had to get up at 5 AM to get to the meeting place.  I also put the word out to some Facebook pages that are aimed at Northeast riding, when I realized there was no group for Northeast Gravel Ridings so I created a group called Northeast Gravel Riders and posted the ride there but there were no takers. I also emailed a friend of mine, Shepard, who lives in the area to see if wanted to join us and he did. 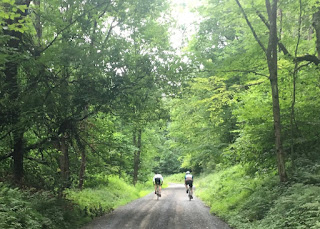 We got off to a later start because Will's bike wasn't shifting well and Shepard, the mechanic, was able to set things right (he had dirty cables) and we were off.  The Morning Eye Opener Climb was of course Sunset Rock Road. It's now my annual tradition and a must do climb, especially if you are going to ride D2R2. 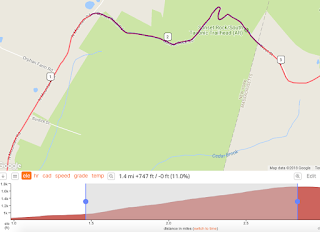 Sunset Rock is a 1.4 mile climb with grades as steep 12% and it's tough.  Shepard took off because he was running a 1x10 with a 49 tooth front chain ring, which was a bit tall for the climbing that we set out to do today.  Will is a great climber, too and I think they kept together during the whole climb. I, on the other hand, am just a slow climber and since the Sex Machine is 3x10 I called Granny for her help for this climb. 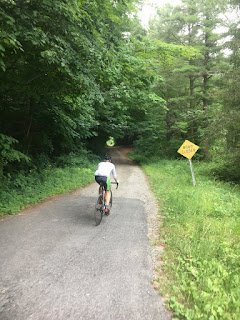 After bombing down Mt Washington Road and riding past the Jug End I called an audible and we dropped a section of the route from the script for the interest of time.  I needed to be at my Dad's house for a party at 2 which meant the latest I could get back to the Deli is 12 and I new the pace we were riding that the additional 8 miles that I had on the route would have made our arrival tight. Foley road was pretty tight. There was only one little muddy section and it looked like it had been graded within the last year. 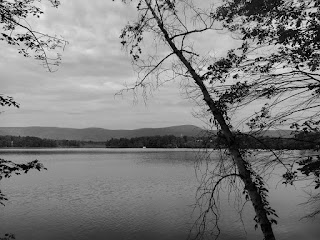 Making our way into Connecticut we rode Between Lakes and stopped to check out the view of the ridge line that we would be riding in about in an hours time.  We bombed down Rt 44 and then rode the Railroad Ramble over to the Salisbury Townhall and to Sweet Williams Pastry Shop.  Will had a Scone and I had a Cinnamon Bun that would give Ovens of France a run for the money. 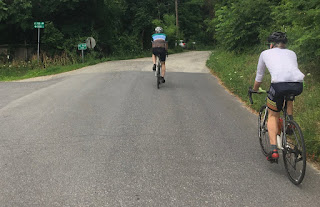 Then we started climing up Factory-Washinee Road towards Mt Riga Road.  It appears that this road was paved within the last year. It wasn't Black Butter, but it was still pretty smooth. 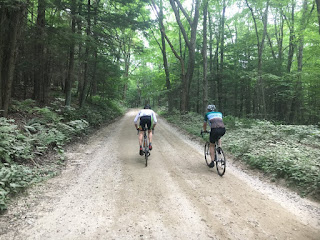 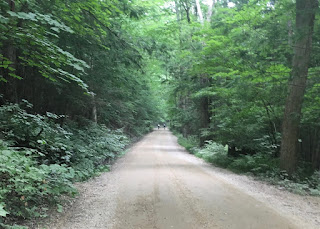 It was really dry 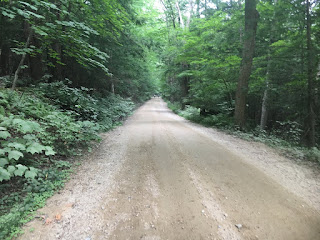 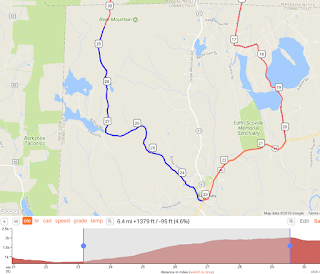 The climb up is 6.4 miles with an average grade 4.6% and its a grind. This time I let granny rest and just ground my way up the hill. Of course Will and Shepard flew up the hill and I met them at the Lake Riga. 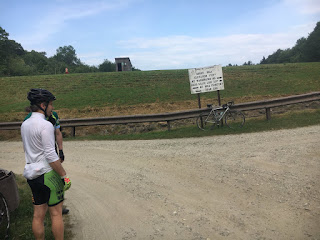 The guys waited for me to catch up to them at the Lake. It was really tempting to stop and take a dip but there wasn't really any time. I made it this point without asking Granny for help and continued that way. 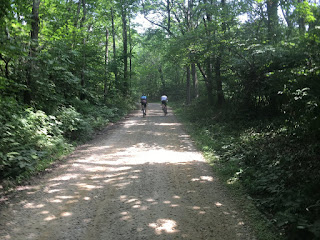 Just 500 more vertical feet to go to the top! From the lake, its pretty steep, 9%, and with the dry roads and abundance of loose stone made this part a tough climb.  Some of the descents down to the State line were equally treacherous. 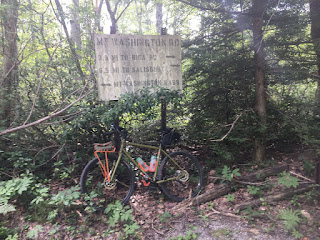 The State line is alway good place to stop. 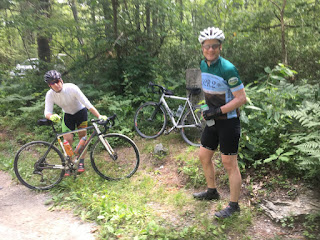 Got back to the Deli with an hour to kill.  Will took off so it was just Shepard and I and we met this guy, Jack Day, that had started riding earlier this year from Iowa and now was going to ride up to Canada. 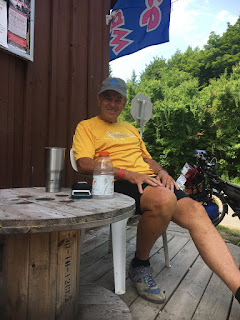 He had a ton of gear on his bike, however, I didn't notice at first but his bike is electric. Isn't that cheating? 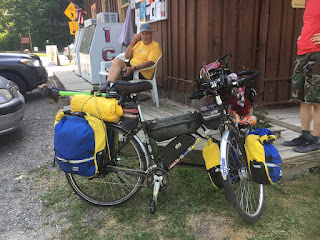 Still, had to give this guy props for making it this far. 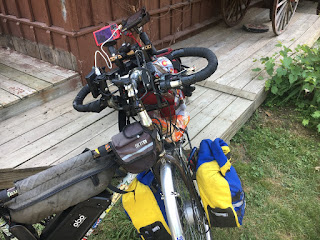