Rich and I planned to do a 50K route recon ride for a charity ride event he is planning. He was referred to me by some of my cycling associates because of my Roubaix to Brews dirt road map. Rich is setting up a gravel grinder ride to be held this fall for Hunt Hill Farm, a local 501c organization that does educational outreach to adults and kids. Since I am pretty familiar with just about all the dirt roads in NWCT I offered to lend a hand with route planning and anything else I can do to help make this event a success and hopefully a destination ride for the years to come. 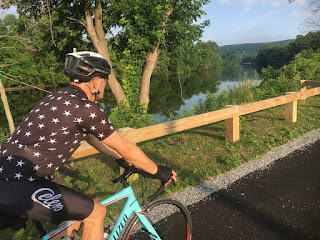 I met up with Rich at the Roxbury Market Wednesday morning at 6:30 AM and we headed down Judd's Bridge to do the climb up to New Milford. We rode down into New Milford proper on a few dirt roads that I know of. One of the highlights of the event is also to show off New Milford's River Walk trail, which we also rode  It's a beautiful little greenway across from Young's Field but terribly short. 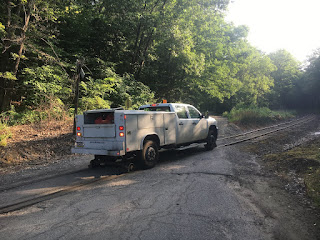 Then we headed up Boardman Bridge over to River Road where we came across a Railroad Maintenance vehicle on the Housatonic Railroad line to Canaan. The worker said there was an 8 foot  in diameter oak tree down across the tracks. 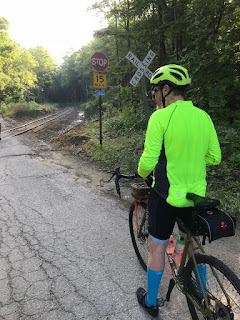 Rich snapped this picture of me. I wore long sleeves because I took a preventative dose of Doxy last night after getting a deer tick attached to me the other night while riding at Upper Paugussett. It was hot and humid but having the long sleeves actually felt pretty good.  The Sex Machine was running great, too. The only thing amiss was my speed and cadence sensor. 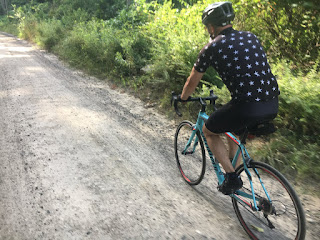 After River Road we headed up Old Station Road to Mud Pond Road. For this future event there might be an extra credit route that includes Front of the Mountain. 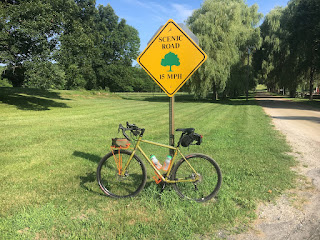 About a half mile down Meeting House Road we stopped so I could see if I could fix my wonky speed sensor. While I was messing around with that Rich got a call and then looked at the time and said he needed to get back to the Market to get his car because he had something planned for later in the morning. I don't think he was planning on riding so slow, even after I warned him I am somewhat of a slow rider, especially in the climbs.  By that point we were averaging about 11 mph. It think it was the heat slowing me (us) down. 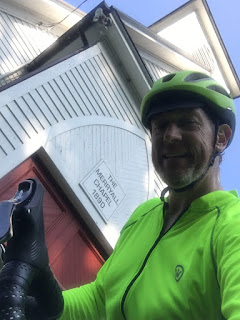 So I headed down the road and then turned onto Mine Road which turns into N(orth?) Rd.  Two New Milford dirt roads that I have never ridden before.  Then I rode up into Merryall and made my way over to Chermanskie Road.  I turned onto Frenchman's road, which is another dirt road that I have never ridden before, too, eventually, made my way over to Kent Falls Brewing and found that they have pigs! 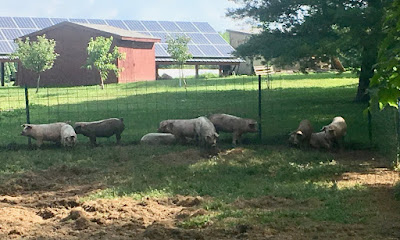 At first they had no idea that I was there but when I started calling to them, "Here, pig, pig, pig, pig!" The boar pulled his head out of the trough, gave a snort and the all bunched up in the corner of the pen.  They were looking like they were going to charge me if I tried to get into the pen. 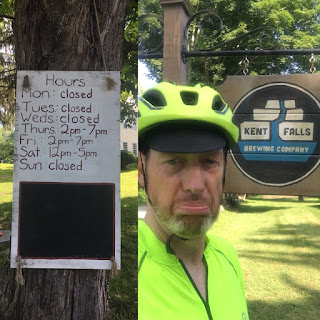 I actually checked the night before to see what Kent Falls Brewing Company's hours were and knew they were closed but I was kind of hoping someone might see me and offer me a cold one.  Of course it was 9 AM and being a holiday I don't think anyone was awake at the farm. 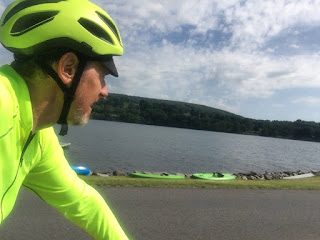 Rode by Lake Waramug and was surprised there were very few riders out. There were more people on the water or running than there were cyclists. 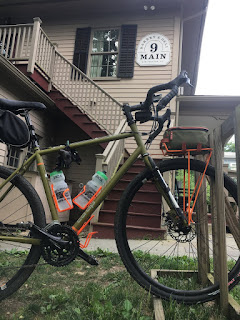 The bacon, egg & cheese with a can of coke more than made up for the disappointment at Kent Falls.  It tasted so good! From New Preston I rode up to Whittlesey Road and down to the Rumsey Hall School where I picked up the old Shepaug Railroad bed and rode it all the way back to Route 47. 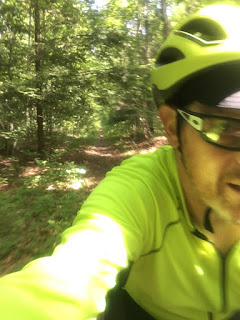 Riding through here is always one of the highlights of my rides through this area. You are exposed to a piece of history that very few people are aware of and it's a great trail to ride. It's just a straight trail, not cindered or paved like most railtrails. This has roots, rocks, and muddy sections, with an occasional downed tree you have to bunny hop or jump over cyclocross style. 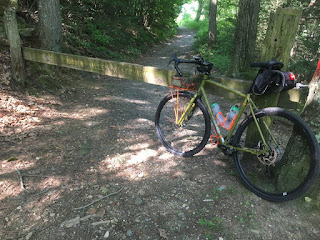 After Hidden Valley I rode down to Steep Rock. You can ride the old Railroad bed, which is cindered, straight into the tunnel but today I stuck to the dirt road. There were a few people out walking and even a family on bikes. 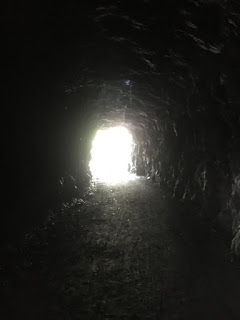 I was hoping for the Tunnel to be a lot cooler but it wasn't. There was a nice little cool breeze coming out of the north portal but inside it was kind of dank. 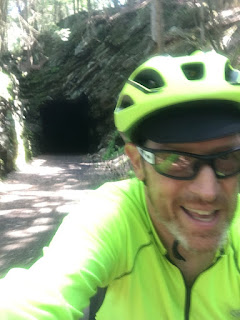 I followed the railroad bed to the trail that leads to the power line access road and then finally to Tunnel Road. Then it was back to Judd's Bridge and finally Roxbury Market where I ran into a Paul Zackin, another gravel rider, who was riding Roxbury dirt roads.

Not a bad loop.  It was way more than the 50K route would be for this fall. After the brewery, which will be a rest stop for the event, the shorter route crosses over 202 and goes back to the farm on a mix of paved and dirt roads.
at 5:07 PM