I always wanted to ride to Massachusetts, so ...

I wanted to ride at least a Century this weekend to get ready for next Saturday's CT Challenge Century ride. True Cyclery had a True to Brew ride that I wanted to do but the distance wasn't what I was looking for and I wanted also to test my bottom bracket on the Voodoo on a long distance ride. That's when I thought about riding to Massachusetts. 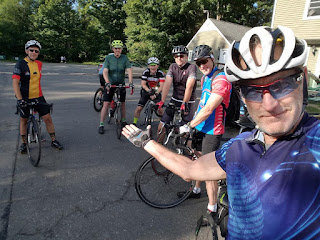 A full assembly of the Newtown Lunartics in which three groups would be splitting off and taking different routes.  They are from left to right, Steven (Stephanie), Me (Marcia, Marcia, Marcia), Steven's friend Tom (guest), Gavin (Gabby), Mike (Michelle), Brendan aka Backback Boy (Dora the Explorer) and Scott (Scarlet).  If you haven't guessed it already, to be a member of this elite group of cyclists you have to let your inner woman out. 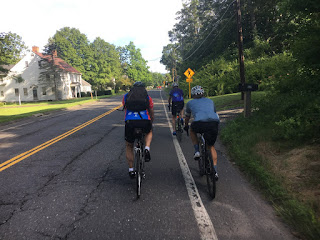 We all rode together taking the flat route to OOF (Oven's of France) but then Scott and Brenden turned around when we got to 317, they had already been riding some miles when they met us at Cover 2.  Meanwhile the rest of continued on to the bakery. 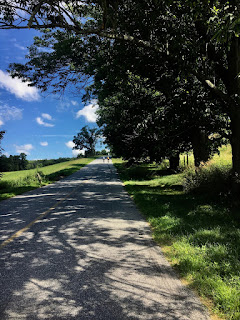 After the stop, Steven, Tom and I headed out on our ride to Massachusetts and the Big Elm Brewery. Initially, I had planned and all numbered roads route but then Steven took over as route master and put us on some really bucolic country roads. 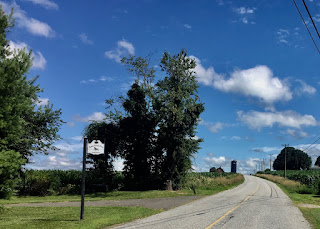 There were a few steep climbs through Woodbury but the real first test of the day was the infamous Hard Hill.  I have only been down it a few times so this was a first but I liked it and scenery is great, too. 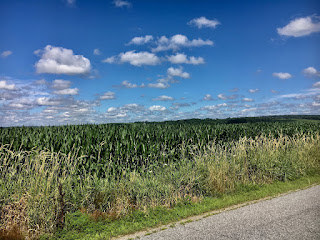 Hard to believe this is July.  It was 65 degrees and felt like a sunny day in autumn. 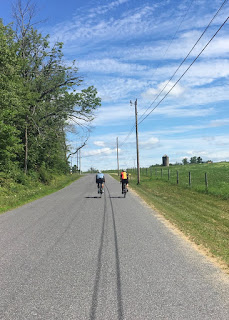 After Hard Hill, it flattens out a bit and then starts climbing again.
Tom and Steve are phenomenal climbers. 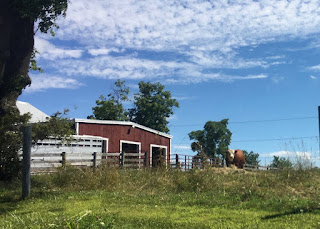 Of course, when you see Heifers, you gotta take a picture 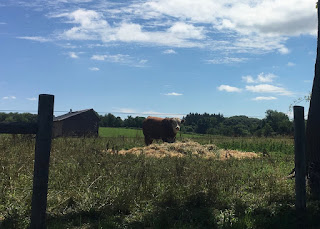 We continued on up through Litchfield and Goshen and then picked up Route 272 and rode the into Norfolk, CT.  Before Route 272, however, this one road we were on was incredible. It was called East Street and it was mostly covered in trees and we saw hardly any cars. 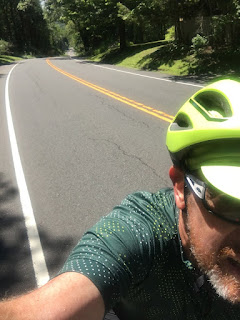 I wanted to stop in Norfolk to refill my bottles but Steven kept going and we missed the center of town. I thought the climb on North Street along the side of Haystack Mountain was going to be huge but it pails in comparison to the one from Ashpohtag Rd to Wood Creek Rd.  It's a steady 9% climb. 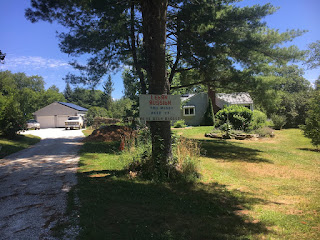 At the top of the climb there was a spite sign. 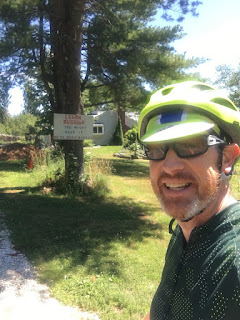 I know a couple of Russian words:
Yes (da)
No (nyet)
Comrade (Tovarishch)
Grandmother (Babushka)
Vulgar Russian swear word that I am not going to translate
(Dolboeb) 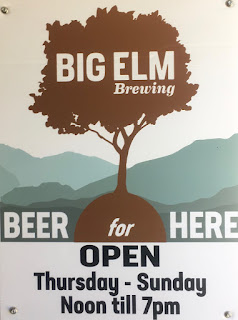 Around the 56th mile into the ride we turned left and headed due west through Campbell Falls State Park and skirting along the CT/MA state line  and then finally headed a little more north and finally came to the Big Elm Brewery.  If you are are going to ride this far, you need a destination. 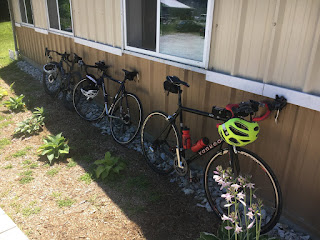 Two years ago I led a Roubaix to Brew that stopped here but this was my first road ride. 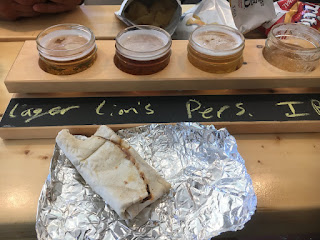 A little trick that learned on the Detour de Connecticut a few years ago.  Heat up some frozen burritos, wrap them in tinfoil and put in a ziplock bag. They fit perfectly in your jersey back pocket and they'll still be warm when it's time to eat them!

With another 65+ miles to ride all I can handle is a flight, so I had:
American Lager
Lion's Ale
Persistance
IPA 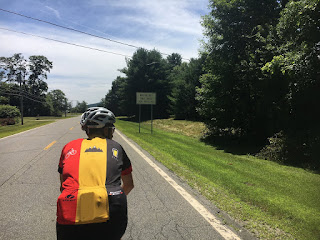 Then we were back on the road. We had ridden up Route 7A and discovered that it was closed due to weakened bridge crossing over the Housatonic River but on a bike you could still ride through.  On the way back we took the detour and made our way down to Canaan where we had lunch at McDonalds.  From Canaan, we road down Rt 7 and then took Rt 63 back to Goshen.  It was flat for a few miles and then started climbing again.  Eventually, we made it back to Bantam and our last stop before the final pull to Newtown. 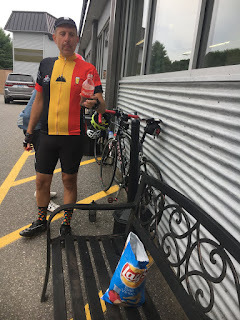 At the Bantam Market we loaded up on coke, chocolate milk and Salt & Vinegar potato chips.  I bought a gallon of water and we topped off our bottles and then headed down Rt 209. Both Steven and Tom broke 100 miles when we stopped at the market but I was only at 98 miles. 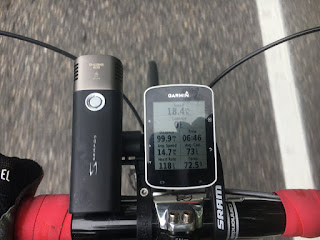 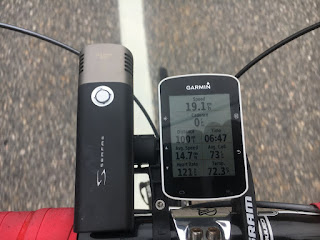 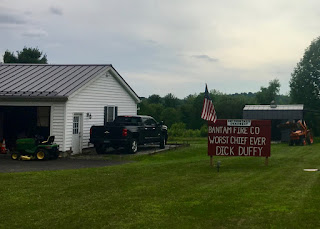 I was riding up here earlier this spring and noticed this sign. The owner had a lot more placards up denoting Dick Duffy's financial dealings but still, I thought it was amusing to take a picture of this spite sign, the second one of the ride! 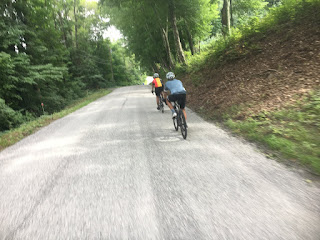 After climbing Todd Hill it was all down hill to Woodbury. 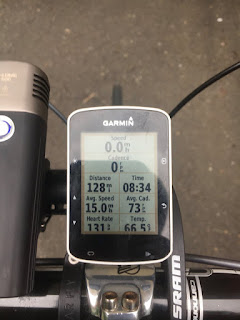 I felt really good when I got home and proud that I had been able to average 15 mph on ride with 8K+ of climbing.  After the ride, I made sure to drink a lot of water and stayed away from beer.  After these big rides I usually cramp up but this time was different.  Drinking a lot of water is key once you are off the bike. On the way to Norfolk, we passed quite a few gravel roads that I have on my Roubaix to Brew map and I happen to come across a gravel ride that is taking place in the Norfolk area on October 27th, 2018 called the Tour de Forest, a benefit ride for Norfolk Rails to Trails.  The planned route is a little lacking so I might have to do my own ride up this fall. Just need to find a brewery that's open on Sunday.