The 3rd Pedaling of the Dirty Dover Gravel Grinder started out with a new twist - more riders! I posted the ride on Le Gravle Randonneur and Christian Bratina (pictured above in a purple jersey) who maintains a ride email list for the Litchfield Hills Cycling Club, saw the post and sent it out on his weekly email.  It wound up on in a thread on the Eastern Block Cycling Club, and I made sure the Newtown Pedalers new about it as well, and voila, there were 8 people on the ride.

It had rained the night before, in fact it was raining when I left my house Saturday morning but the radar said it wasn't raining in Kent.  It started out kind of cool so I tried something different, I wore leg and arm warmers and a riding jacket, which was a mistake because it came off as soon as we turned onto North Kent RR No 1, which is a jeep road that goes up the east side of Skiff Mountain and has to be the steepest dirt road climb in CT!

Every Gravel Grinder needs a signature climb.  D2R2 has quite a few but Patten Hill & Archambo Hill stand out for me the most.  F2G2 (Berkshire Cycling Association Fall Foliage Gravel Grinder) has George Cannon and Schemmerhorn Hill (2014).  The Mt Greylock Gravel Grinder has Mt Greylock but I think you could also include East Hill Road near Berkshire East, which happens to be one of the HUGE climbs on the 160 KM D2R2 route, too.  Well, D2G2's signature climb is North Kent RR No 1 aka The Skiff Mountain Climb.

The other big climb in CT which happens to be entirely dirt, is Mt Riga Road and while longer, only has a 4 % average grade.  Both climbs are excellent training grounds for D2R2 if you are planning on it in the future.  D2G2 has some other signature climbs like Cascade Road, Pugsley Hill, Butts Hollow, Tower Hill, Killearn Road, and Hammond Hill.


North Kent Road starts out nice and steep but there is a loose section that always gets me and I end up walking it.  There are a few other sections that I have walked in the past only on this ride I rode most of them!  My goal is of course to ride the entire climb.


This climb is not 100% dirt and turns to pavement on Skiff Mountain Road but it keeps climbing.  It tops out on Modley Road in Sharon, which happens be dirt, too.


Our group was reduced by one when one of the riders, Randy, took a left onto Skiff Mountain Road after the dirt portion.  There was a new sign but besides the rain puddles and last night's rain, it wasn't muddy at all.


The Town of Sharon was out grading Modley Road this morning which made riding this section a little sketchy. 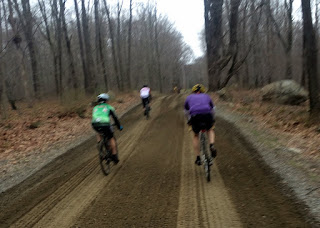 Turning north onto South Ellsworth Road, we rode the asphalt until turning west onto Westwood No 2 Road which is dirt.  This road passes by a nice beaver pond and has a nice climb in the middle.  Then a great descent to the intersection with Westwood No 1 Road. 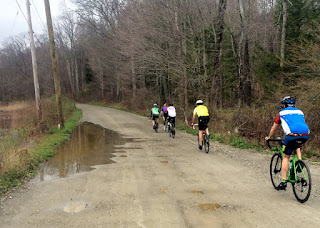 Turning north onto Westwood No 1 Road it starts with some rolling hills and then eventually gives way to fast, dirt road descent in which you can really pick up some speed.  Westwoods turns into Boland Road when it becomes paved.  Turning north onto Route 41 is when we first experience the wind and it's worse than riding the newly graded section on Modley Road!  However, turning west again and out of the wind onto Benton Road, we find a nice dirty descent into New York State. 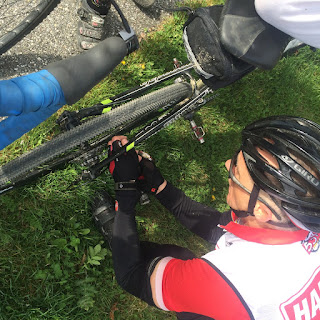 Rather than continue riding down NY State Highway 343 into Amenia, we pick up the Harlem Valley Rail Trail (HRVT) for a short jaunt into Amenia and the first food stop, the Cumberland Farms.  But first, Alan needs to fix a stiff link in his chain. 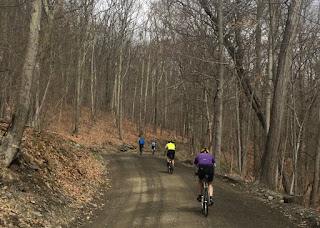 Randy caught up to us the Cumberland Farms.  He was navigating solely on the cue sheet.  We filled bottles, got some food and recharged a bit we before heading into the next climb up Cascade Road from Amenia to the farm country between Route 22 and Taconic State Parkway. 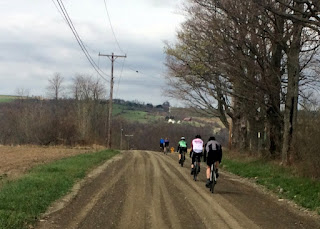 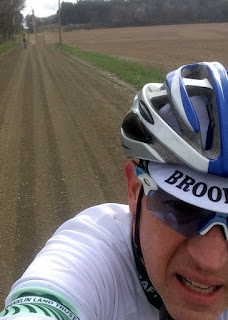 From Cascade and the lovely smell of fresh cow manure we end up on Pugsley Hill.  It's an 8% sustained climb through farm country and then a great, dirt road descent down to Bandall Amenia Rd. 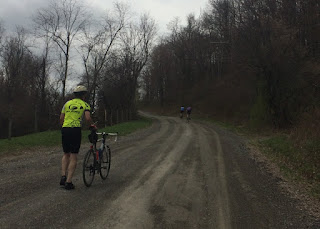 We weren't the only ones enjoying the great weather this day was becoming.  Came across this couple riding on Ludlow Woods Road. 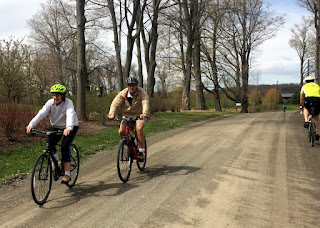 I fell behind at this point due to some chain suck and the further behind on Stanford Road when I dropped my chain.  When I got to the turn off for Woodstock Road I noticed that Paul didn't make the turn and was about a mile further down Stanford Road.  I was hoping to find a car heading in that direction and ask the driver to tell him to turn back but there weren't any cars heading that way so I set off after him.  As he was climbing up the last hill before Route 44 either he heard me yelling at him when I spotted him again or he figured he made a mistake and turned around.  We rode back to Woodstock and then rode the dirt roads down towards Mill Brook Village. 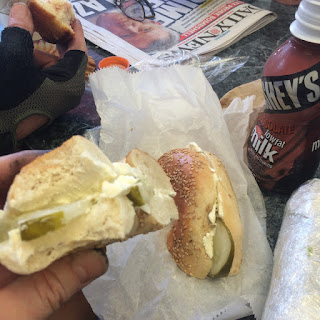 I went for my favorite ridenosh, bagel and cream cheese with pickles.  I also a got a pickle to go for noshing on the road, too.  We lost Randy again somewhere between the farm country and Millbrook. From Millbrook we wound our way east again to pick up the climb up Killearn Road and then descend down to Chestnut Ridge.  From there we picked up Hammond Hill and started descending down in the Dover Plains.  Before the next time climb up Tower Hill we stopped off at Renny's Gas Station and Laundromat on Route 22 to recharge and fill bottles.  Paul need to fix his pedal and Randy caught up to us again.  In fact he stayed with us the rest of the way.  Paul, Alan and Christian took off early and we never saw them again. 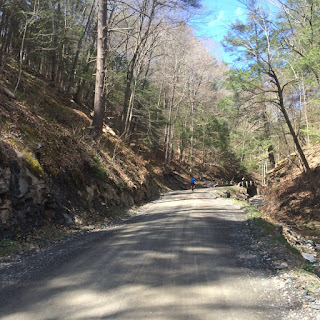 From Renny's we started riding north on Route 22 and wind made it feel like you were pedaling in molasses.  Then we turned onto Tower Road and out of the wind heading into the second to last big climb of the day. 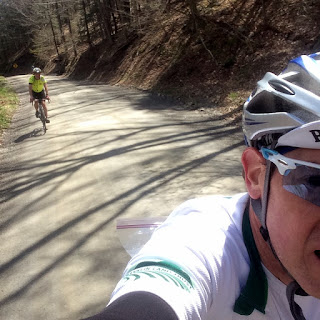 The climb up Tower Road is long and arduous but well worth it on the other side for the view of the Catskill Mountains. 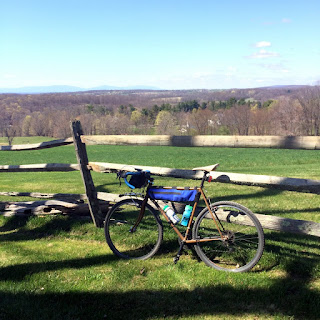 My Surly Cross Check was riding really nice despite a few chain drops and one bout of chain suck. The 700x40c Schwalbe Tour Ride tires combined with the shock absorbing steel frame allows me to bomb down dirt roads.  However, after this ride, it's time for some new brake pads (after descending Hammond Hill) and I think I am going to replace the tires.  A carbon fork might be in the Cross Check's future, too. 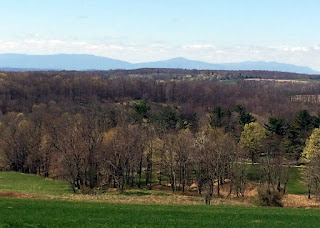 The view of the Catskills was spectacular.  Further down the hill I came across Paul looking at his smart phone.  He flagged me down to tell me that he just found out that his wife was in the hospital and he needed to find the quickest way back to Kent.  He ended up going back up Tower Hill and then down the way we came and then wound up on Bogg Hollow Road back to Kent.

No one was waiting at the bottom of Tower Hill so I started off on the route by myself until I saw Michael Parker at the Mobil Station on Rt 44 in Lithrow.  We stayed together the rest of the way. 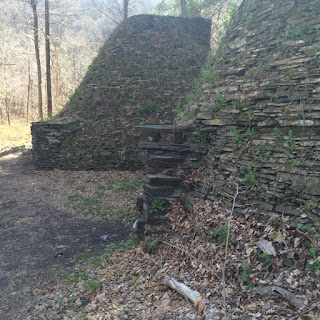 We stopped off at the Charcoal Kilns in Wassaic so I could send a text to Will and to let him know where I was.  The kilns were a unique design to improve upon the old way of just an open pit fire.  We recharged a bit for the last big climb back up Skiff Mountain. 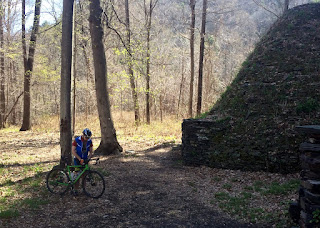 We rode more hard ball roads to get to Lambert Road and again the head wind was brutal. 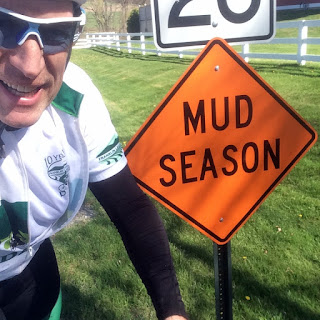 The last big climb on the route is Lambert Road.  It takes you back to Skiff Mountain.  Once at the top you start descending down through Macendonia Brook State Park and then pop out onto Rt 341. From there, it's a short ride back to Kent. 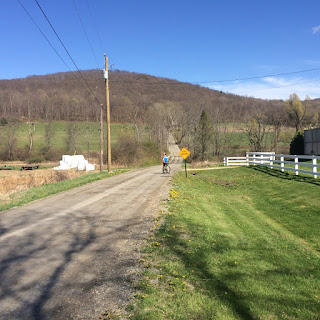 Michael and I stayed together through the whole climb and chatted about power meters and ways to improve conditioning.  Eventually making it to the top we started descending down towards Macendonia.  I stopped to send another text to Will that didn't go through.  I caught up to Michael on the downhill before Macedonia Brook State Park and we stayed together for a bit but then I lost him through state park because I was flying.  He caught up on Rt 341 and we road back to the town hall together.  Awesome ride!  I think I will have to do this again, only make it a full Century, with a little more climbing to prep for D2R2.