Why ride a fatbike when you can snowshoe? 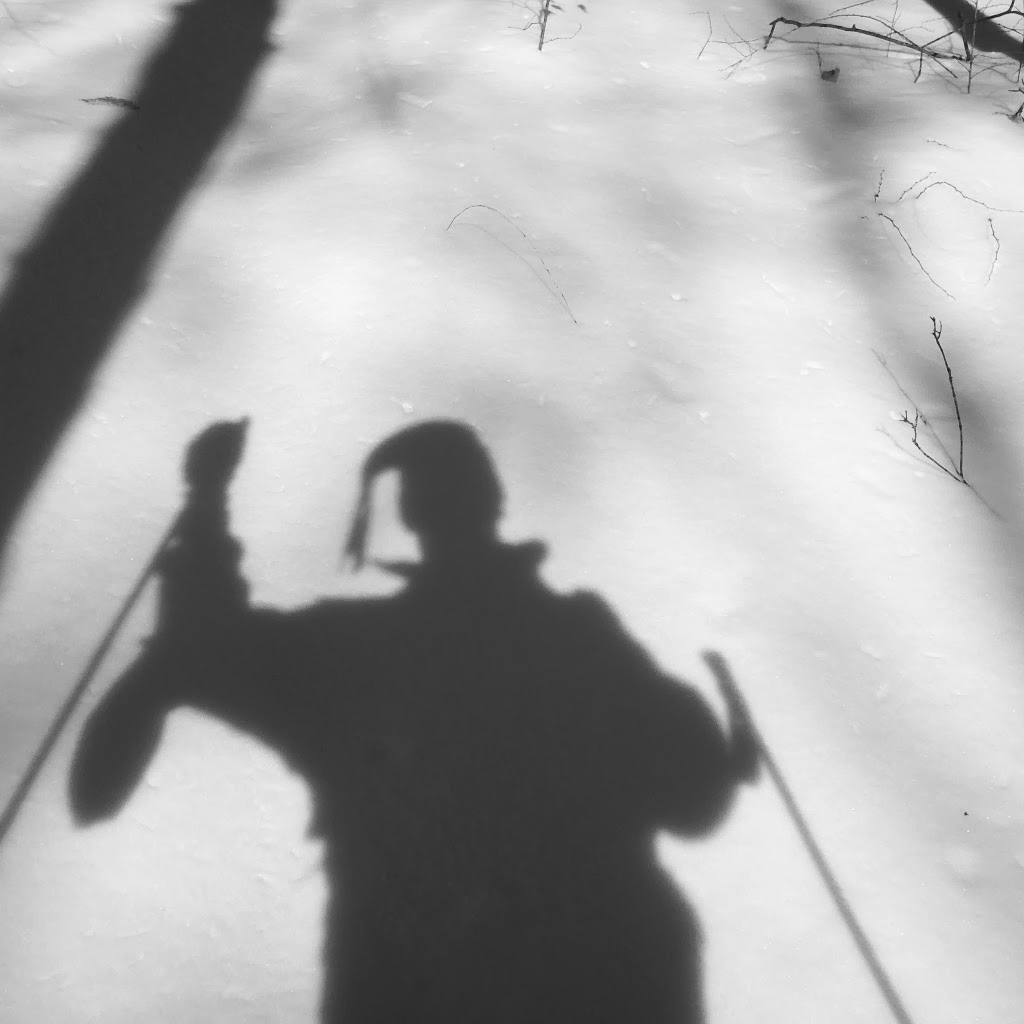 The funny thing is that I have wanted a fatbike for years but initially couldn't afford one, then, couldn't really see the need to have something that you could ride only 2 or 3 months out of the year.  Of course, fatbikes are ridden year round, I know, but still until something comes along that combines the ability to run fat tires and also skinnier tires, then I might be interested.  In fact, there are a few bikes available right now that will do just that.  I probably won't get one because there are other things to do in the snow that I love to do as well. 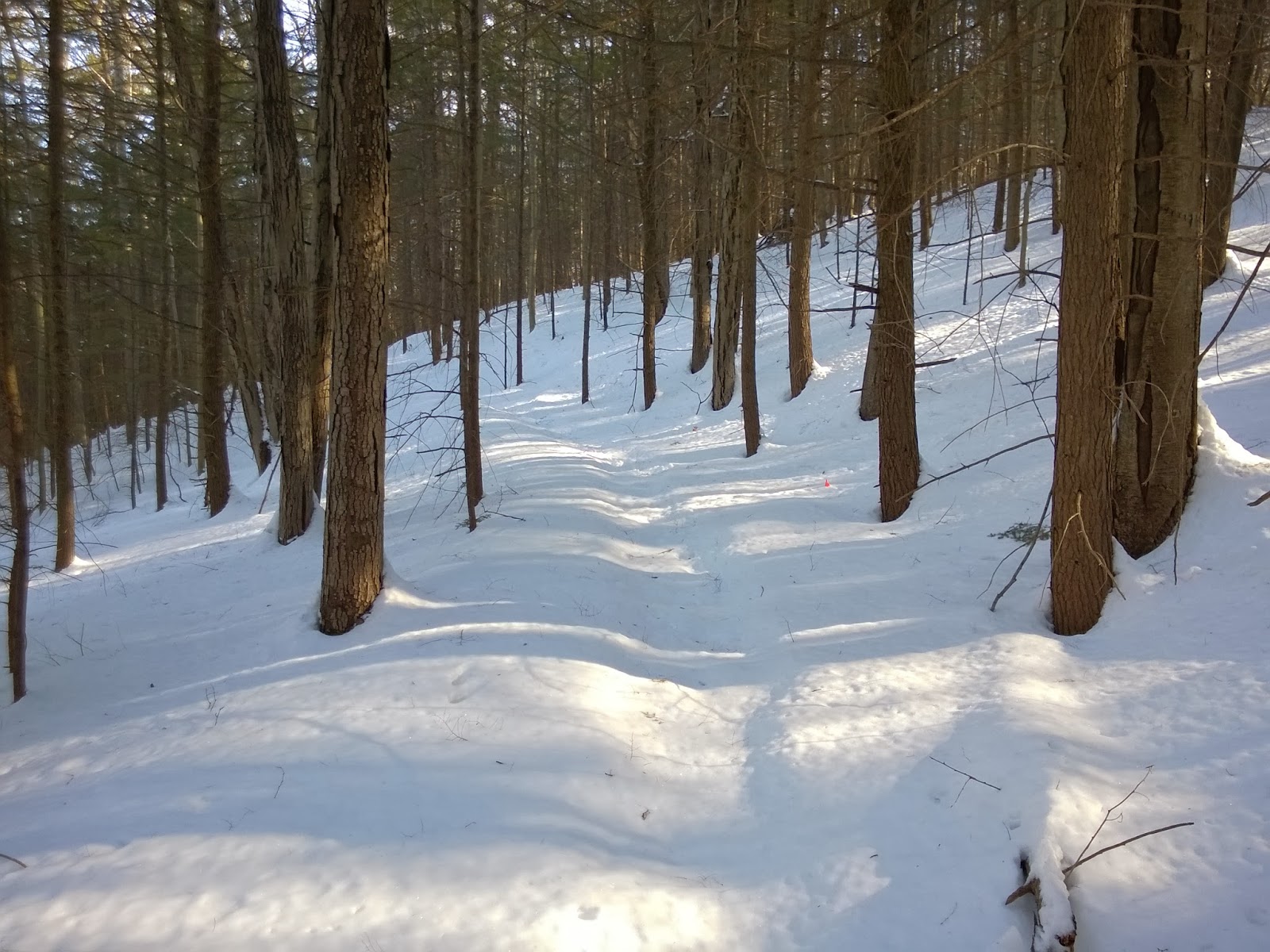 I was hoping to have virgin powder the whole trip but what was I thinking?  With all the trails at Upper P these days and all this snow we now have, there was bound to be other snowshoers ahead of me with the same idea.  Coming up from Pond Brook that was indeed the case but those tracks continued down the Blue Trail when I branched off onto the Mulikin.  However, it appears that someone came up the Mulikin on snowshoes already. 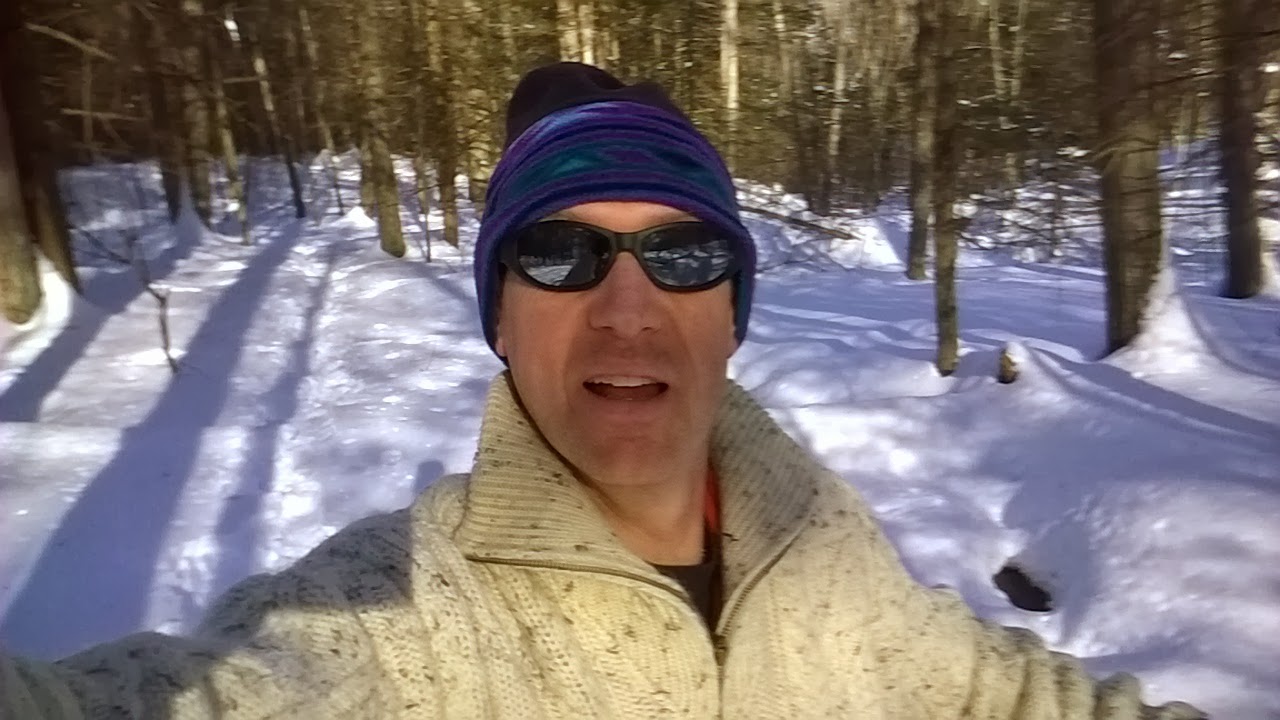 I took a break at the top of the first Mulikin climb to remove some clothing and readjust my pack a bit.  Call me overly, over cautious to the point of OCD but I am never in the woods without a first aid kit, knife, lighter, flashlight, GPS, extra layers, water, something to eat, at least one cell phone, a camera, and of course, most importantly a can of beer! 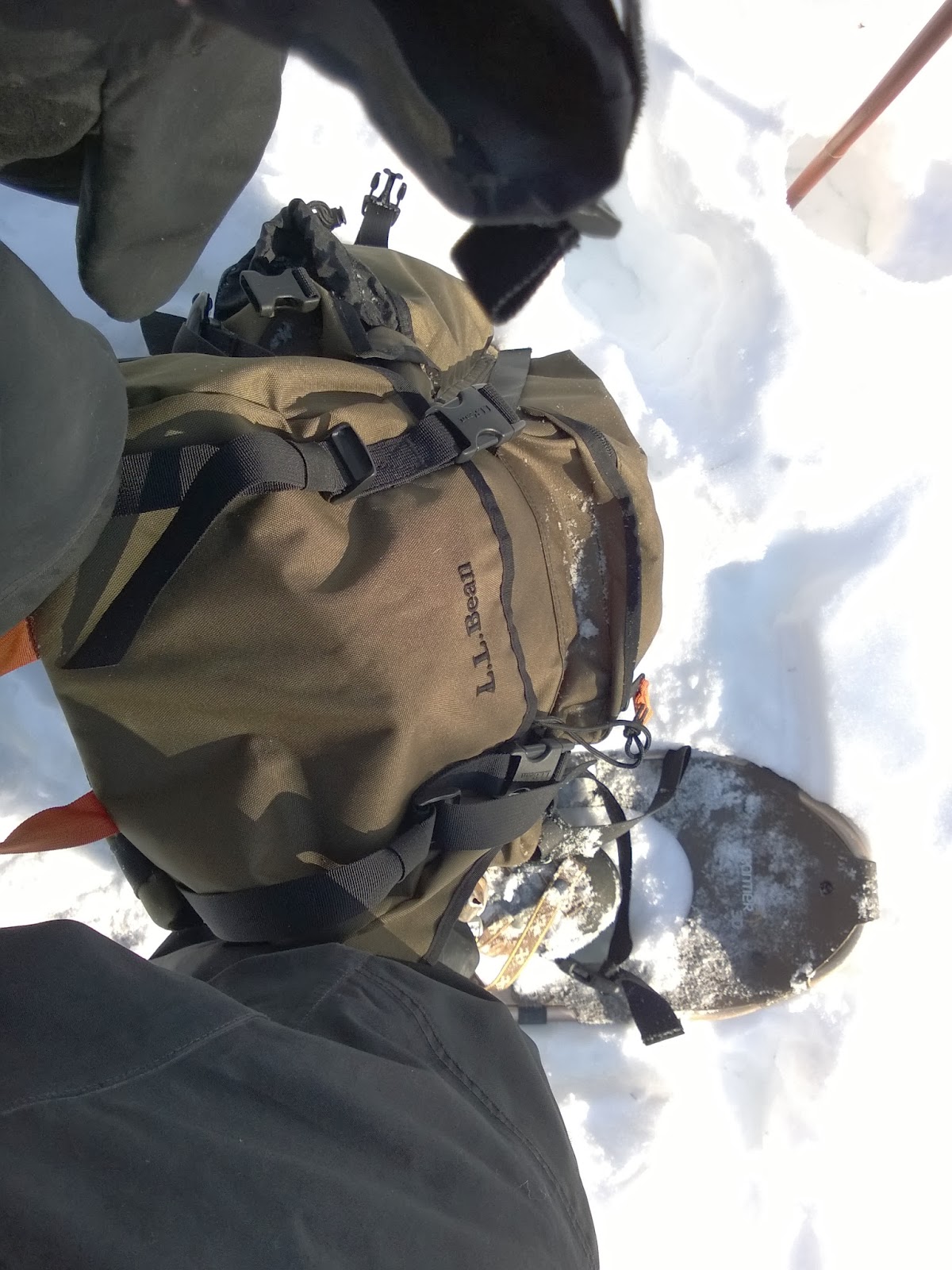 All this gear fits nicely into my LL Bean rucksack.  I just wish the pack had a few more external pockets.  Like putting a large external compartment on the top cover flap which you could stuff a poncho or shell jacket into would be great.  Also incorporating a pocket or two on the straps to hold a cell phone/camera or GPS would be really smart.  I have my own GPS holder but it would be nice not having to get something non OEM. 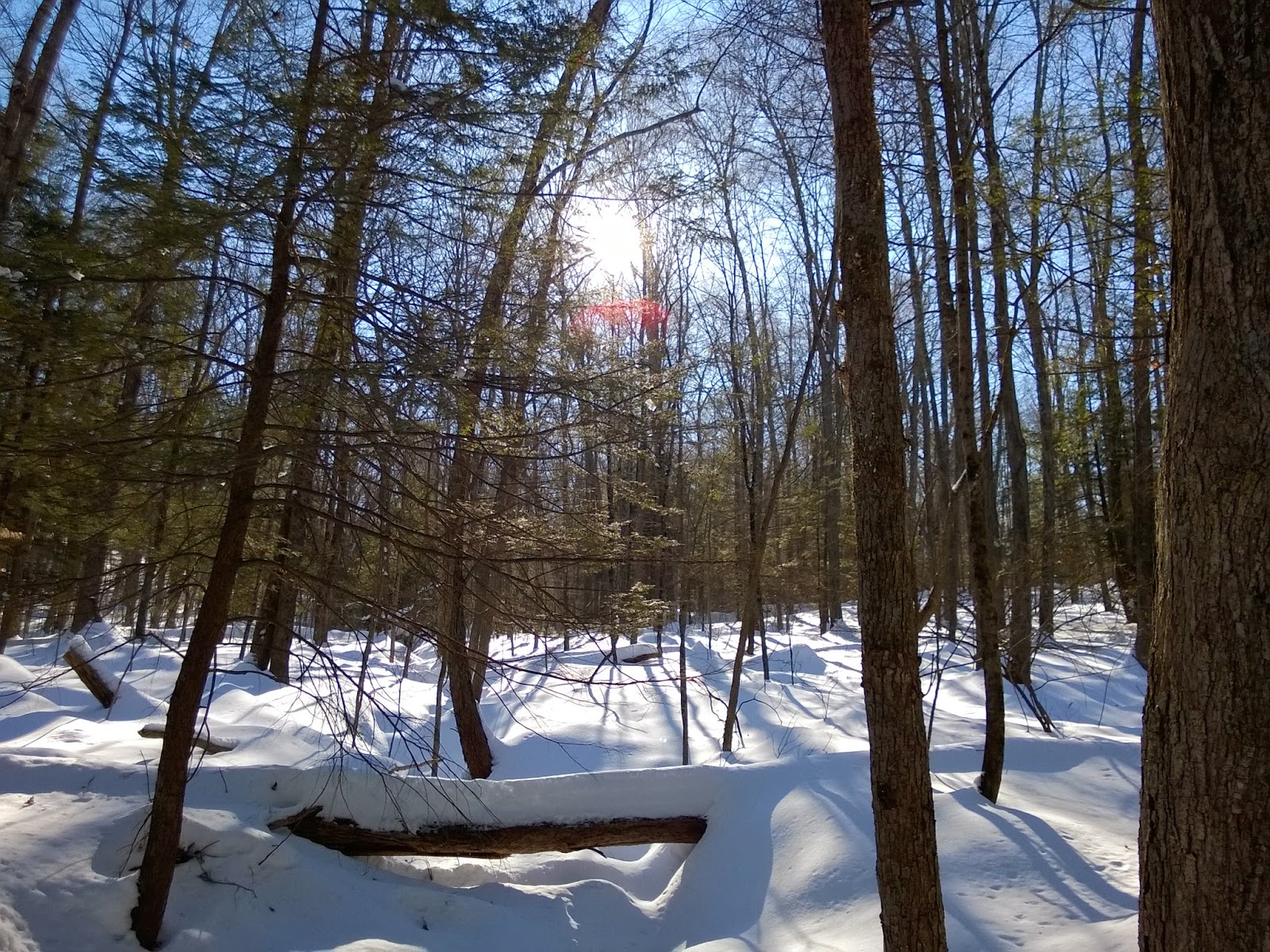 It's funny but I have ridden through here a thousand times and never once do I recall this tree down that would make a good skinny.  Guess I will have to wait until spring. 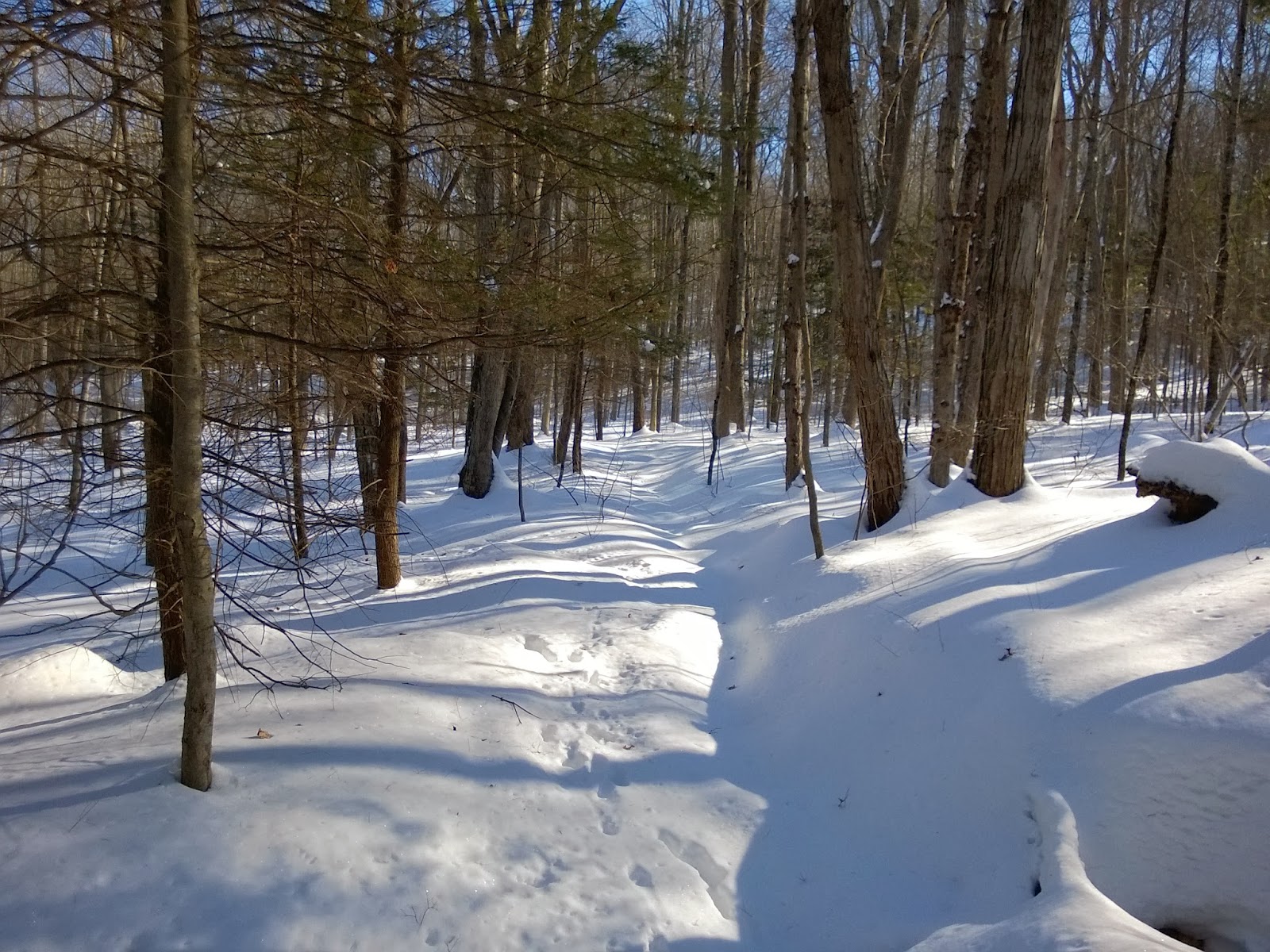 From the intersection with the White Trail, this part of the Mulikin was pristine.  It wasn't until just above the Up-and-over that I found three or four sets of snowshoe tracks coming from out of the thicket onto the Mulikin.  I thought that was interesting especially since it was coming from an area where I think someone wants to make their own trail.  I have been finding different tapes here and there that I know don't belong to the DEEP Forester. 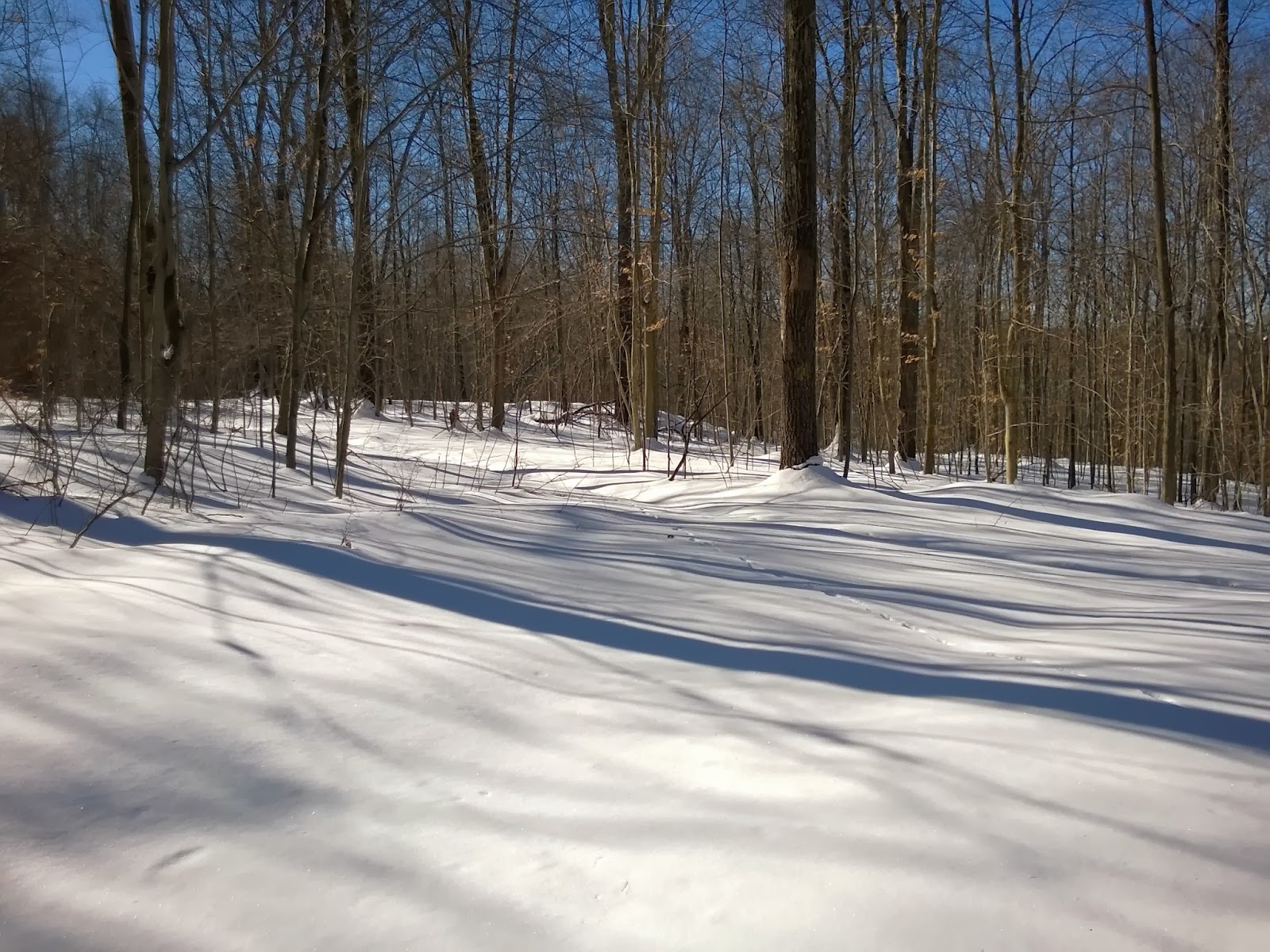 At the intersection of the Gussy with the Poly Brody I found a pristine scene.  No snowshoe tracks! 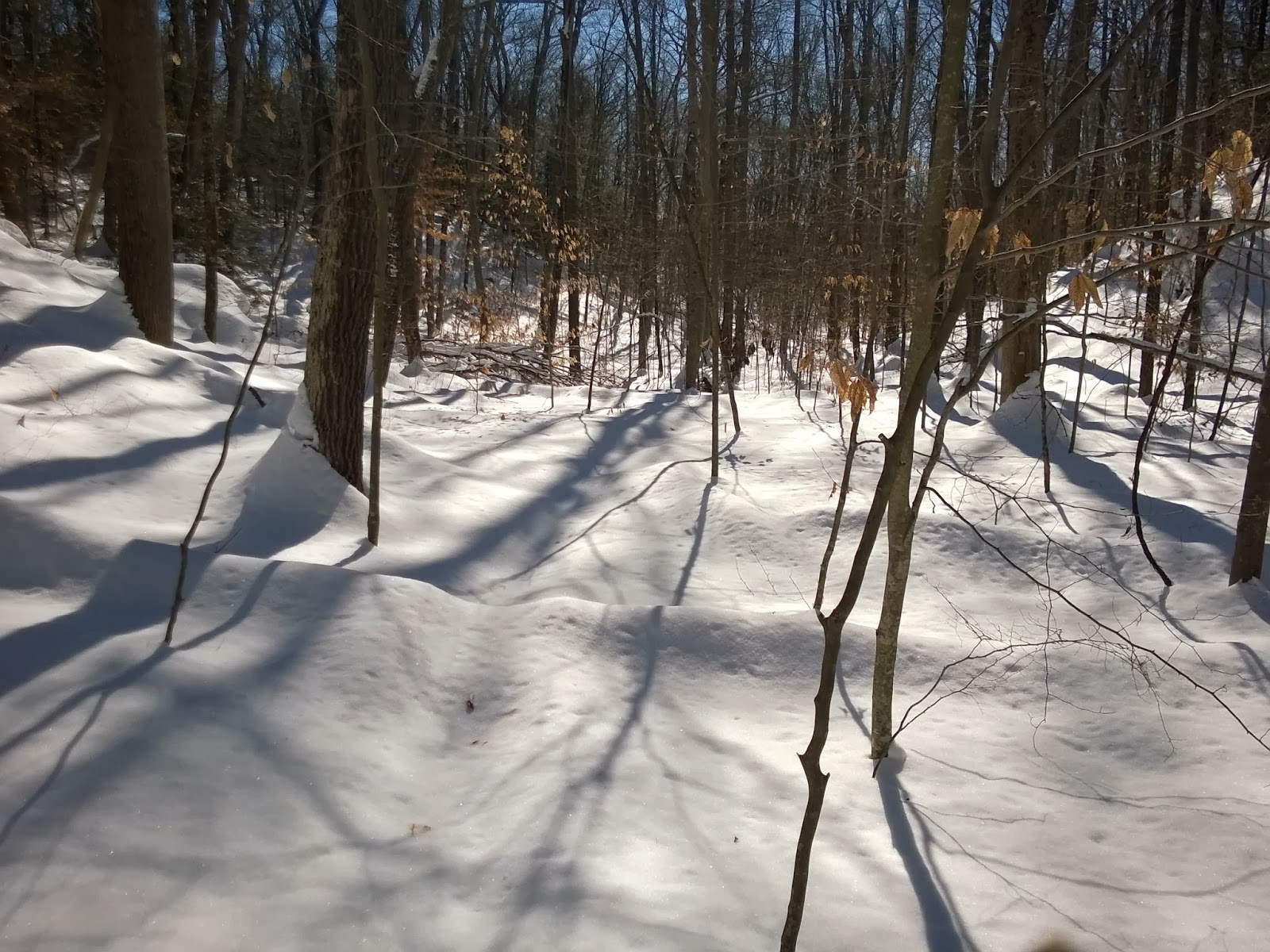 However, the compression of the older snow tells me that someone has been riding the trail in the snow. Nothing wrong with that in fact it's expected, after all the Upper Gussy is becoming quite popular amongst the locals. 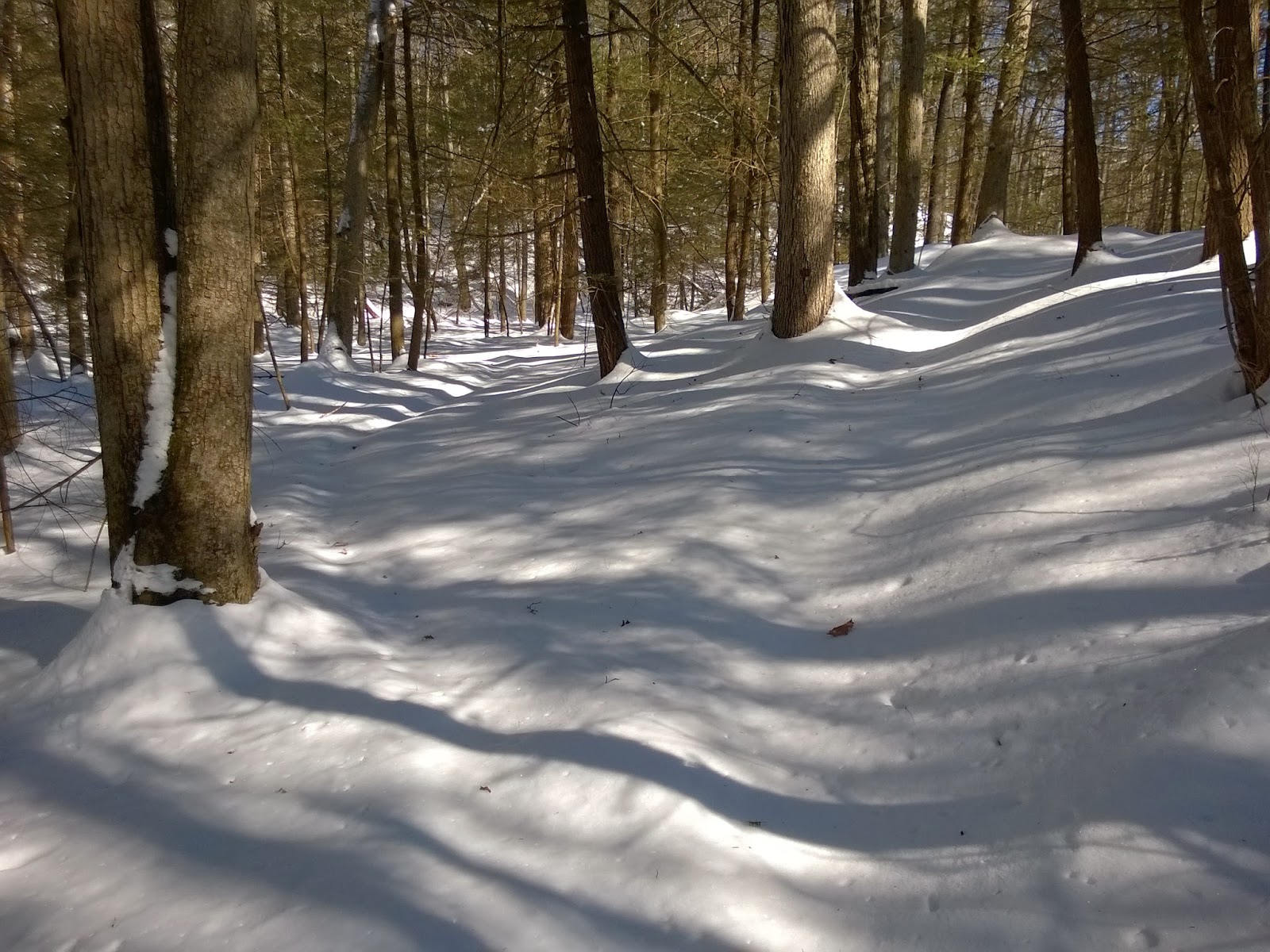 However, Cheater Lines or Pussy Paths, that arise are somewhat disconcerting.  This new line that has developed does give this section a little better flow you miss out a really good technical section with two optional rock Up-and-Overs.  I guess this falls into the dumbing down category.  You might have to click on the image above to see the track of the previous riders off to the left.  Regular trail goes up and to the right. 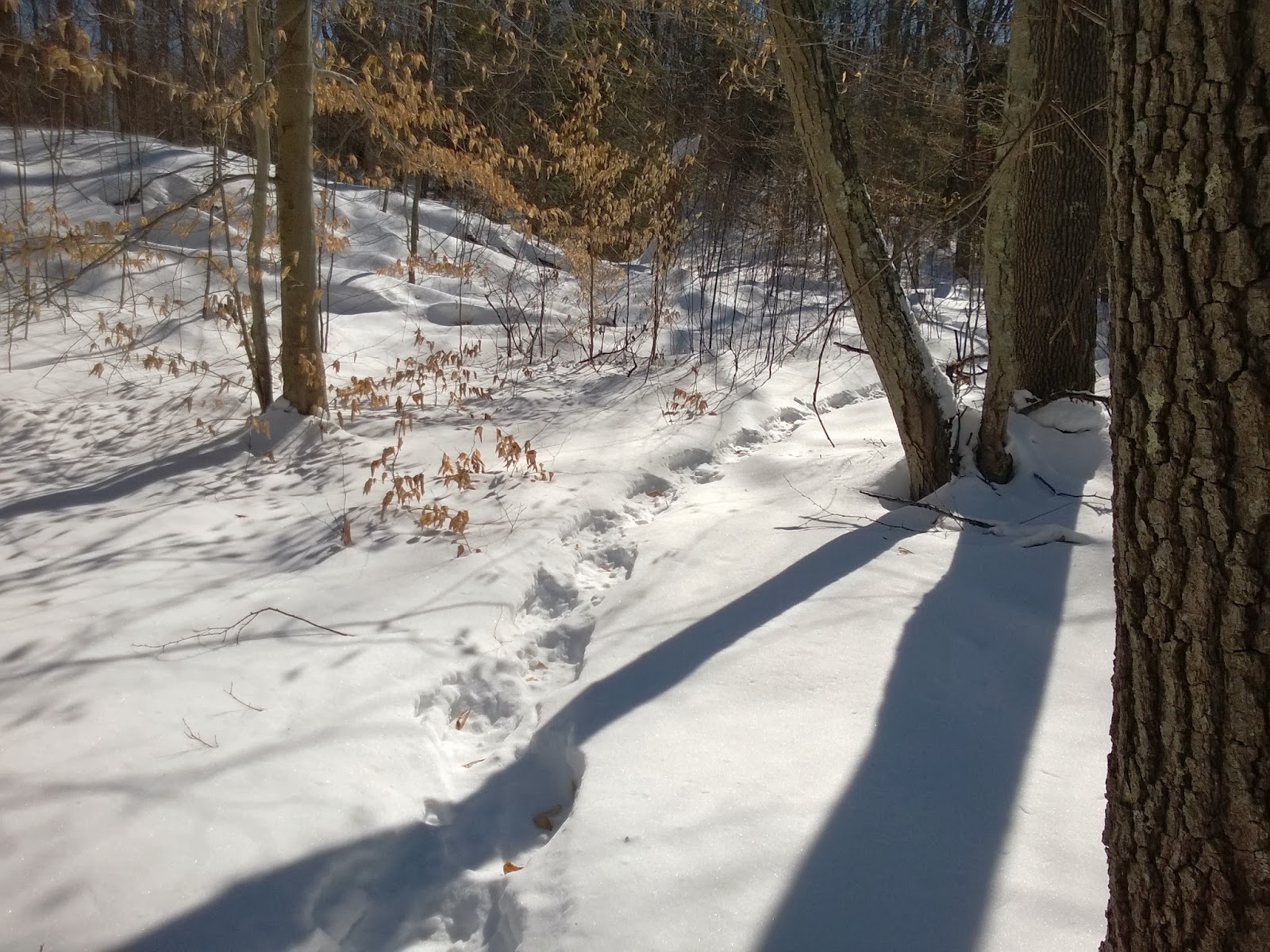 Nearing the Echo Valley side of the forest I found snowshoe tracks that just stopped.  Looks like who ever came this way either didn't want to continue this way.  The stupid thing is when this person back tracked, he or she walked in their initial tracks.  I find it's much better to create a flatter track so that it becomes more uniform.  This also has an unintended consequence for grooming the trail and making it accessible for, of course, let's hear it, the one bike that I don't have, a fat bike.  This section will be good but the rest of the Gussy needs another tramping through. 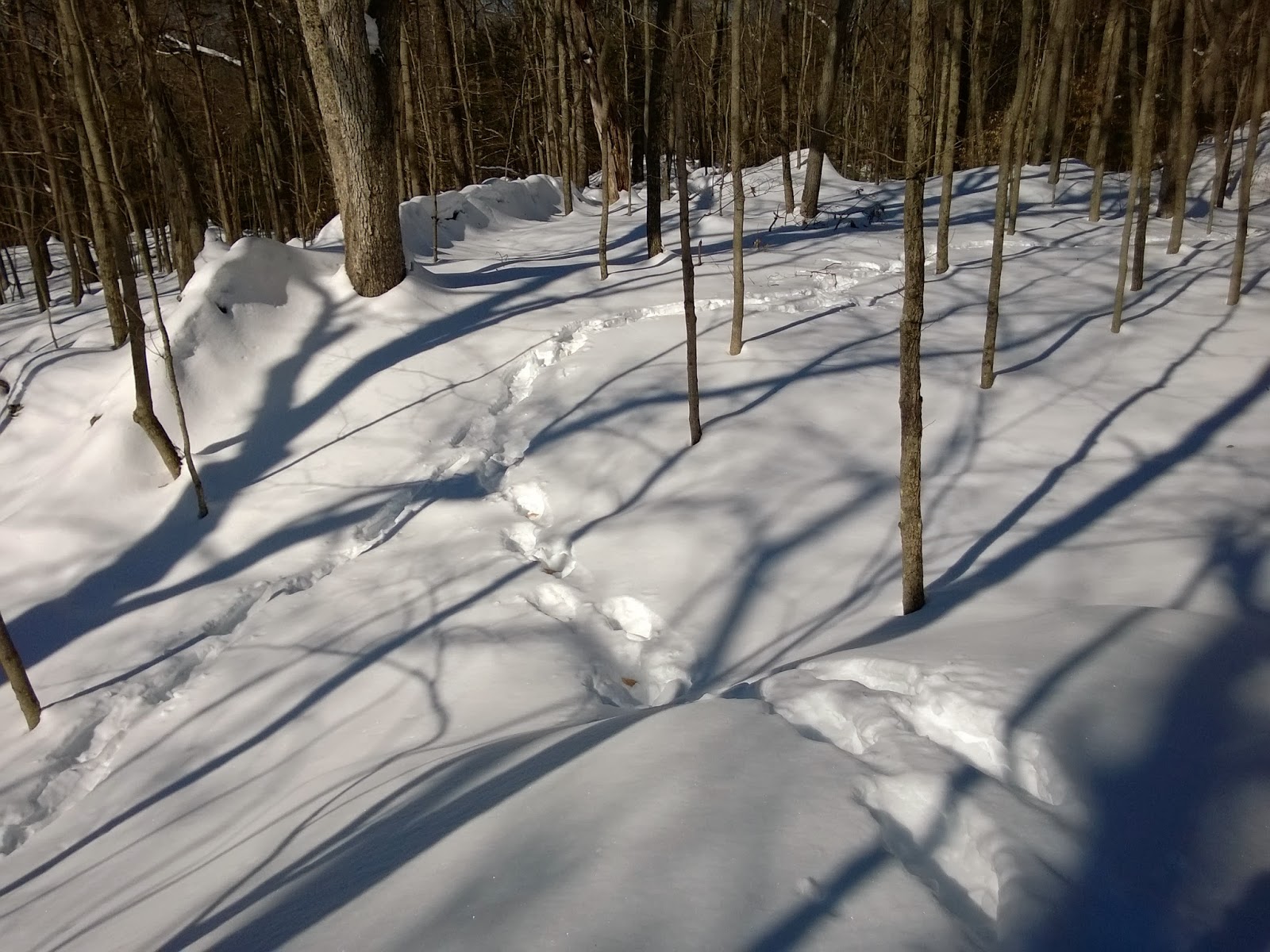 At the Brew Crew Roller, the snowshoer before me rolled it on their snowshoes which tells me this person is indeed a mountain biker.  The also did the one further down. 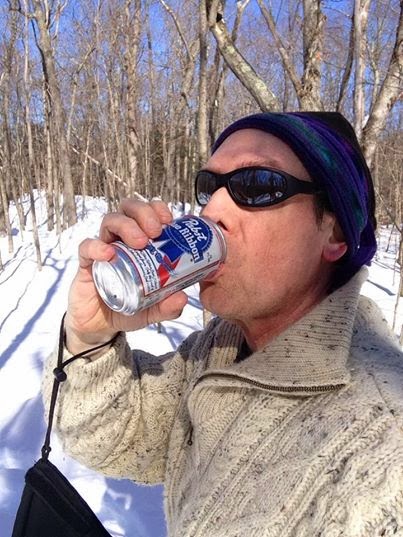 I took the time to re-hydrate with some carbohydrates at the Brew Crew Roller.  While heading down the Gussy the wind was at my back but at this point I turned north and things got a bit chillier from here on back.  I was wearing just my overmitts on my bare hands but then needed to go back to thermals because the wind just sucked the warm right out of my hands.  Of course, drinking a cold beer didn't help either. 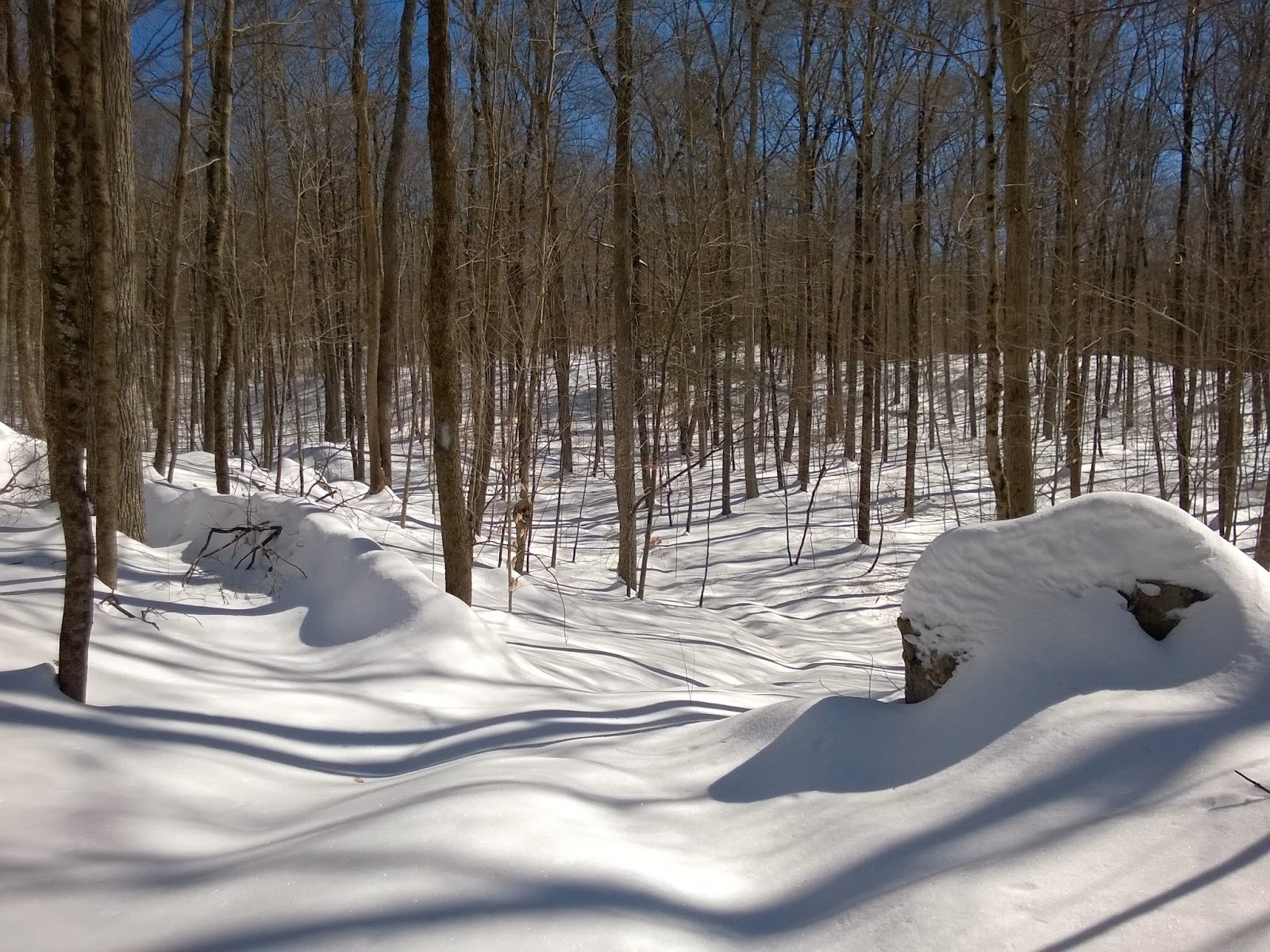 On the way back, I loosely followed the yellow trail bushwacking here and there with my mountain biking brain on over drive.  It's so much easier to see the lines in the snow of where the trail should go as opposed when it's not covered in snow.  I left the yellow trail where it climbs back up the blue trail and roamed around a bit still I found the trail again taking an interesting direction that I will need to come back explore again.  I did, however, find that someone moved the white trail and if I am not mistaken it appears someone might have ridden this a few snow storms ago.  I am going to have to come back and explore this some more, too! 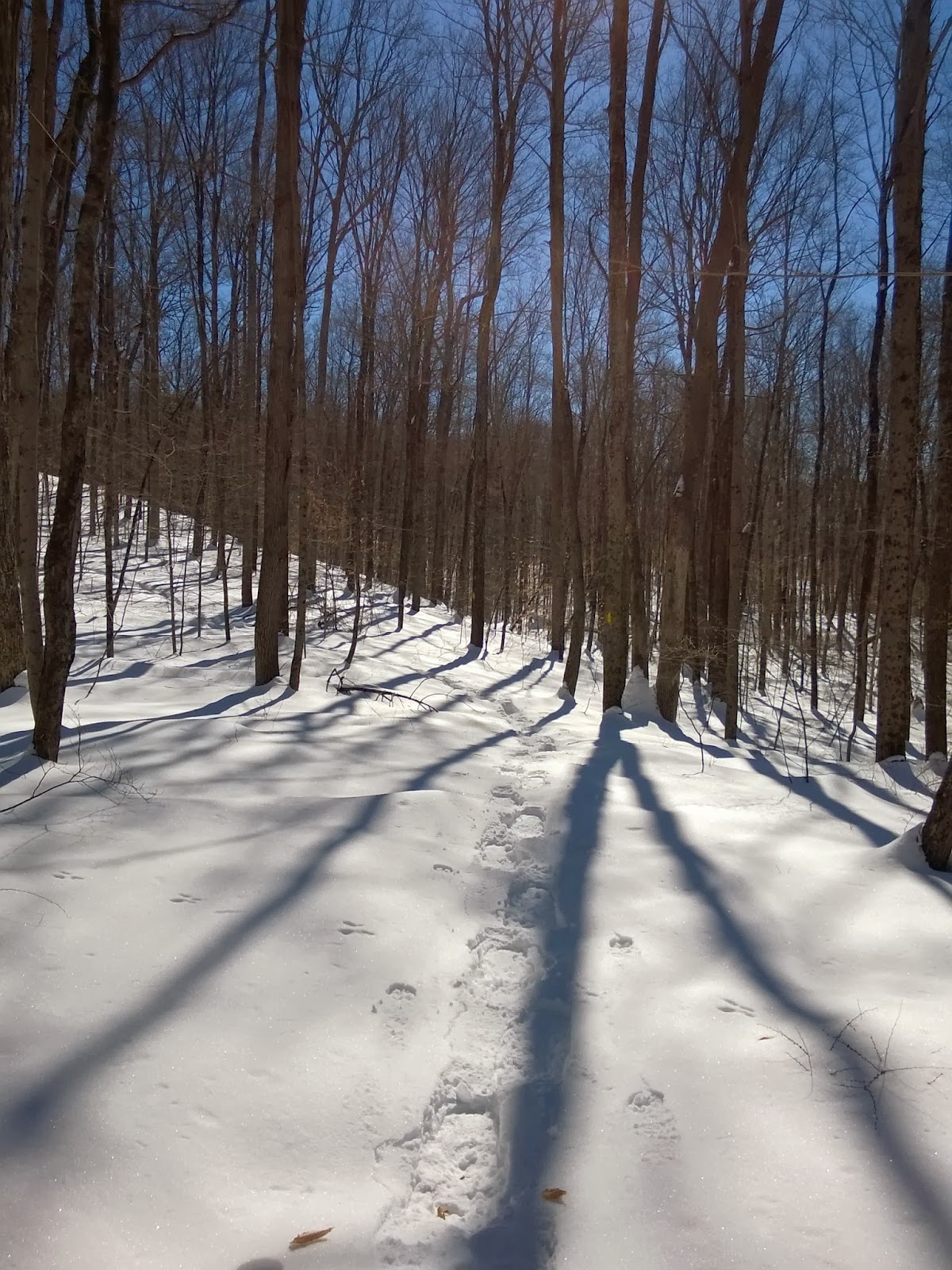 After my first stop on the Mulikin I was halfway up the second climb when I realized my bells weren't jingling.  Rather than go back for them I just hopped onto the white trail and it lead me right to them! 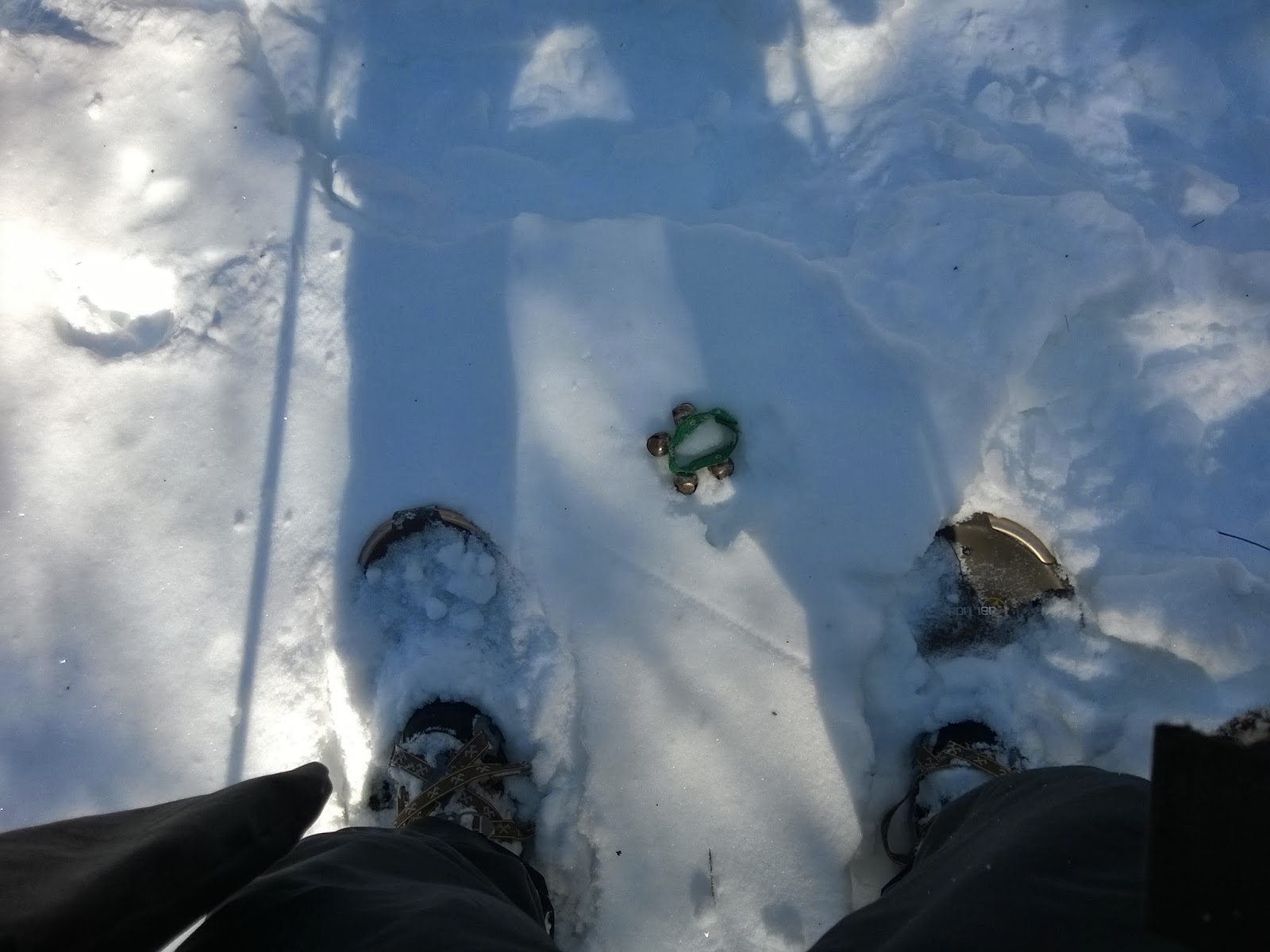 From there I took an old trail down to a rock that I call the Flight Simulator, for obvious reasons, and picked up the Mulikin Reroute that I have yet to do something with. 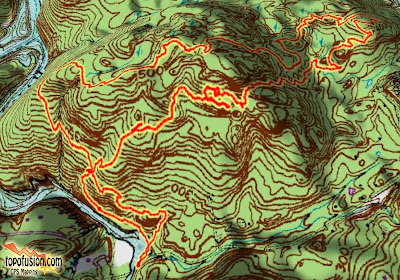