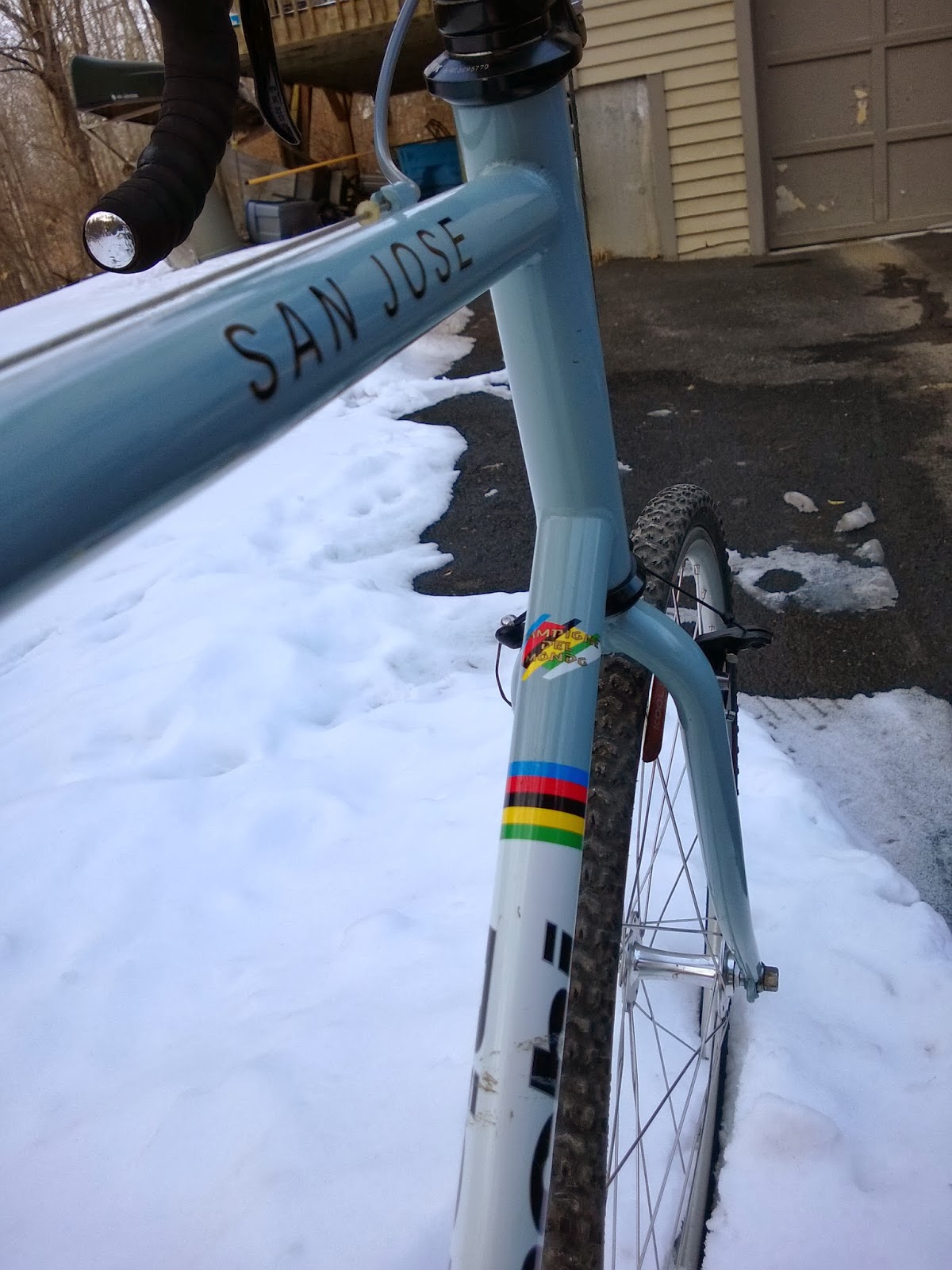 I freely admit that I am a bike whore but with my recent acquisitions of the Surly and now this Bianchi San Jose I am settling into a more long term, albeit polyamorous biking relationship.  My tastes seem to changing, too, no longer am I the die hard, roadie despising, mountain biker.  Rather more of a cyclist who enjoys all sorts of riding.  And of course, nothing can beat the feel of steel between the legs! 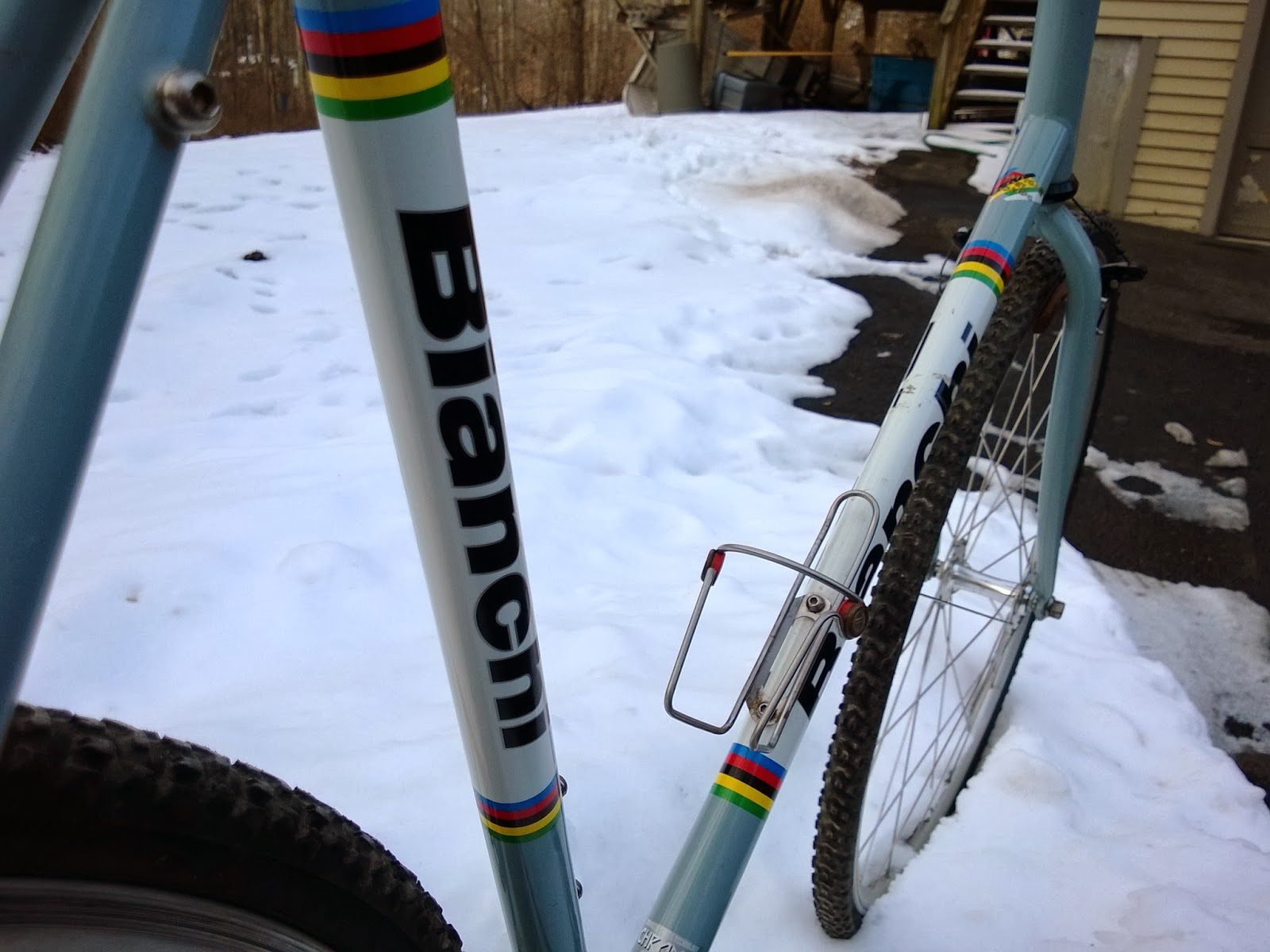 After the Newtown CX race last December, I had a lot of fun racing CX and want to do more of it.  I knew I wasn't going to race the Qball after the fiasco that I had with my disc brakes and besides, I have been itching for something a little lighter and specific to fixed gear/single speed for the roads, railtrails, and light trails.  I think the Qball is past it's prime for me.  After my visit to the Bicycle Center for my fitting session and ordering a 2014 Cannondale, I still had a few Ben Franklins laying around, and when I saw this Bianchi San Jose on Craigslist, I new I just had to have it! 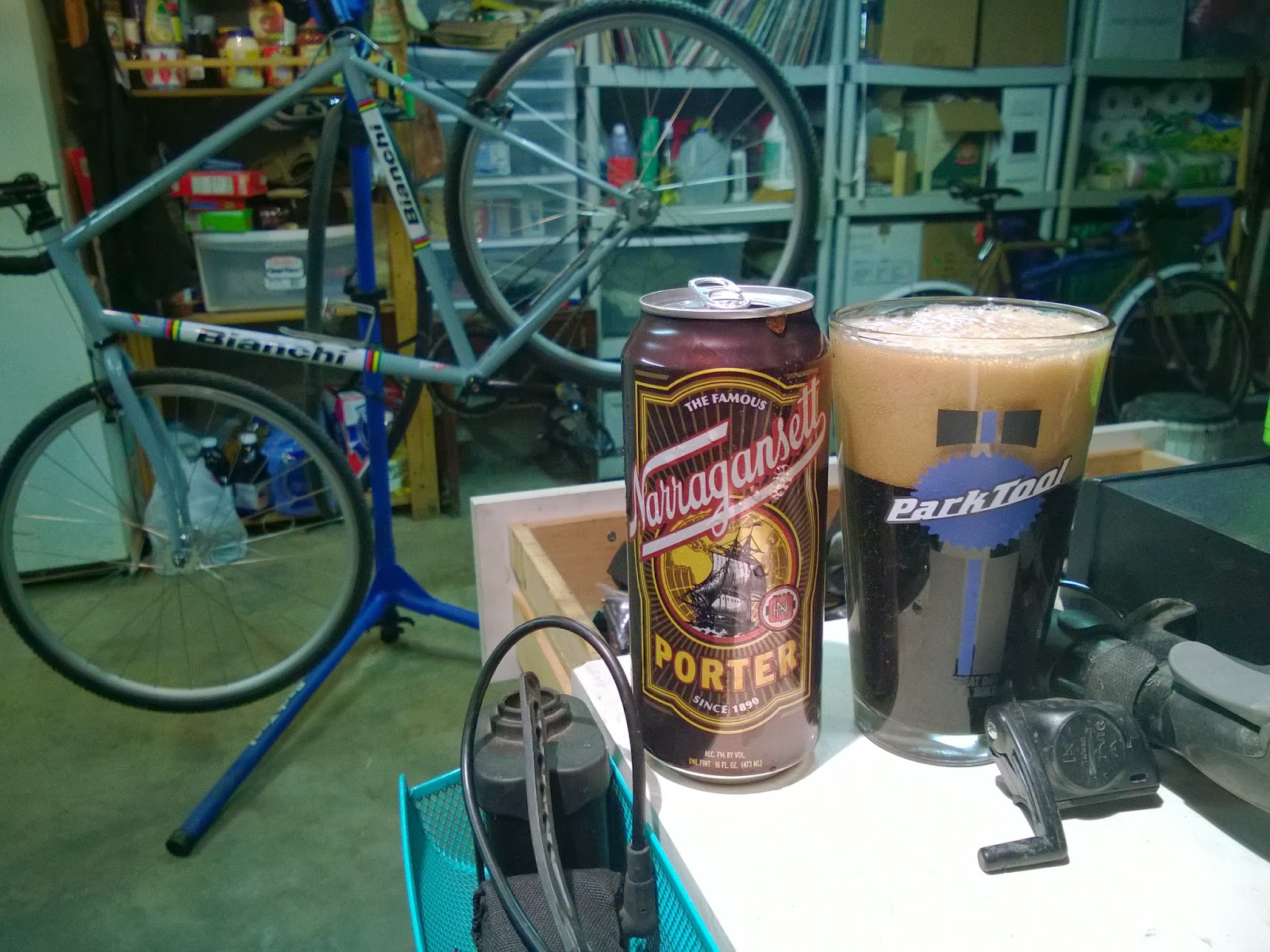 Once I was done with work, it was time to go over the bike and get it set up for the way I wanted it.  I immediately changed saddles and went with my Origin8 fixie.  I was hoping, really hoping, that Brown Santa was going to deliver a saddle that I won in a contest last week but I guess a little snow and ice was too much for them to deal with in order get the package to me when they said it would be delivered.  Not to mention, they sent it to MASS instead of CT, probably because they thought NEWTOWN was the same as NEWTON.  Now, however, when that new saddle comes in I am not sure whether I want to put the Fizik saddle on this bike now.  Have to ride it and see if I like it or not. 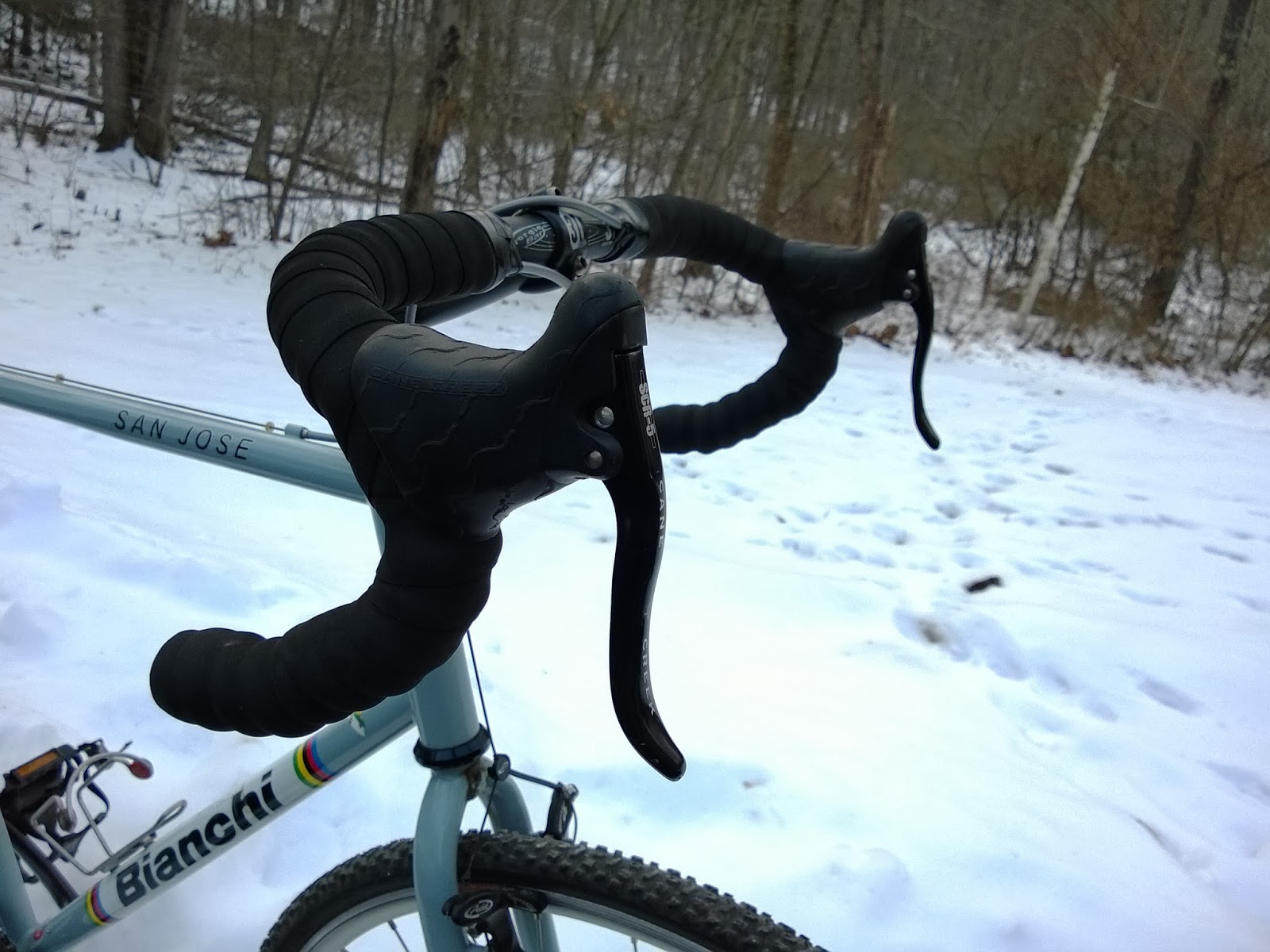 I was a little concerned at purchase time that the stem was going to be too long.  In fact, when I first got on the bike and took it for a spin around the parking lot, everything felt off.  Once home, I measured the stem and it turns out it's 120mm and not 140mm like the original owner thought.  I did discover, however, that the bars are 25.4 diameter and not 31.8.  Not a big deal, I have an adapter for my Bar Fly that lets me use it on 25.4 diameter bars.  I compared my woodchippers and the GaryII's to these and found that I will probably be switching over to either of the flared, dirt drops.  Just have to find a new stem 31.8 stem with very little or no rise. 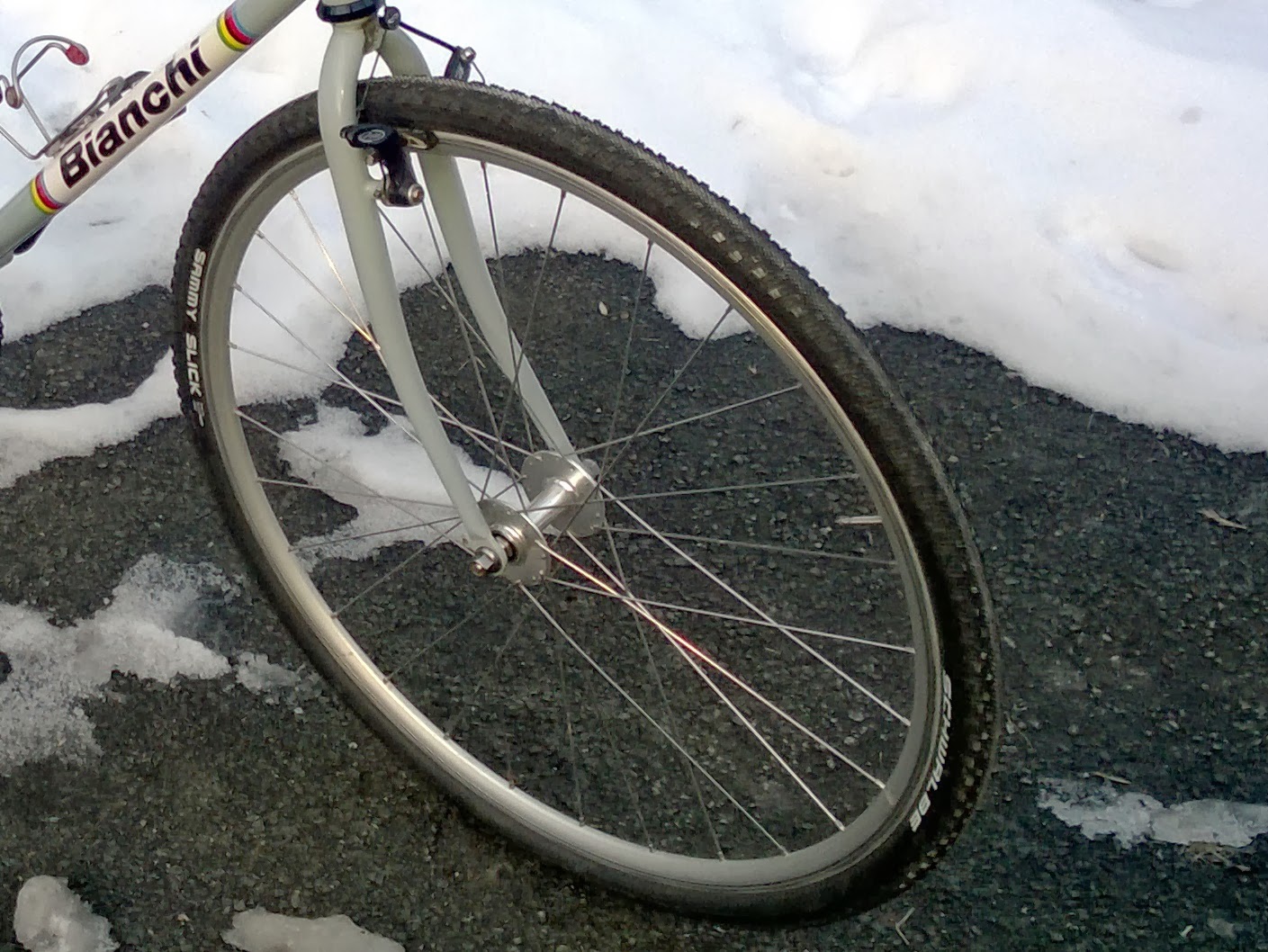 While the more cyclocross'y Hutchinson tires that came with the bike and will be great for 'Cross season later this year I got a pair of Schwable Sammy Slicks, commuting tires, in the deal, too.  Since I will be commuting a lot on this bike I went to those tires right away.  The tread pattern is similar to the Vee Rubber tires I got with the Surly but with some knobby edges for a little grip in the loose stuff. 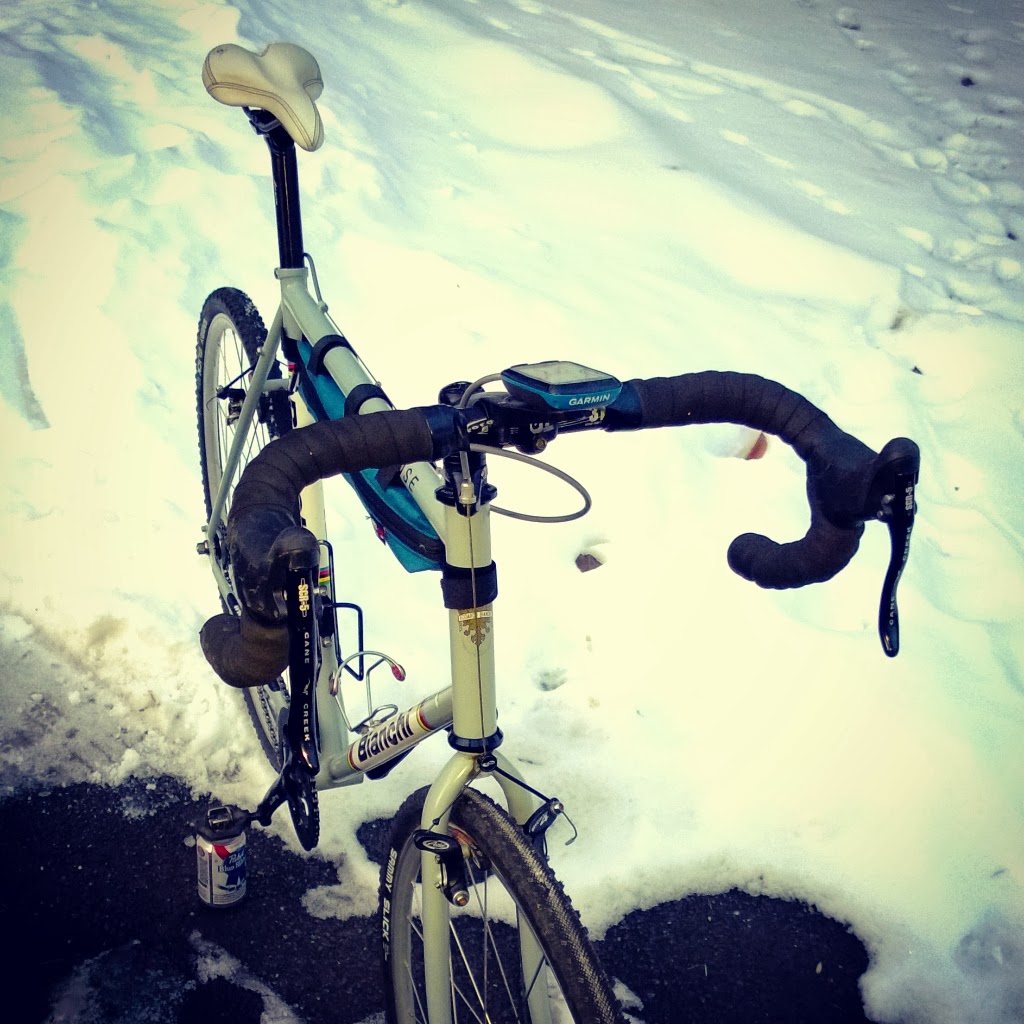 The only other thing I did was tighten up the brakes and mount my Garmin Cadence and Speed Sensor.  I noticed this morning, though there is a little rub on the back back brake pad so for the inaugural ride, I will just readjust the brakes until I take it off the next time I am riding the trainer (with a different bolt on wheel) and I will put it on the truing stand.  So, I think what this means for the Qball, is that it's finally going on the chopping block.  I thought with the sale of the Kona that I might not be racing SSAP 2014 but I might have another option.  I have some ideas for it's next build that will help me sell it better, so stay tuned. 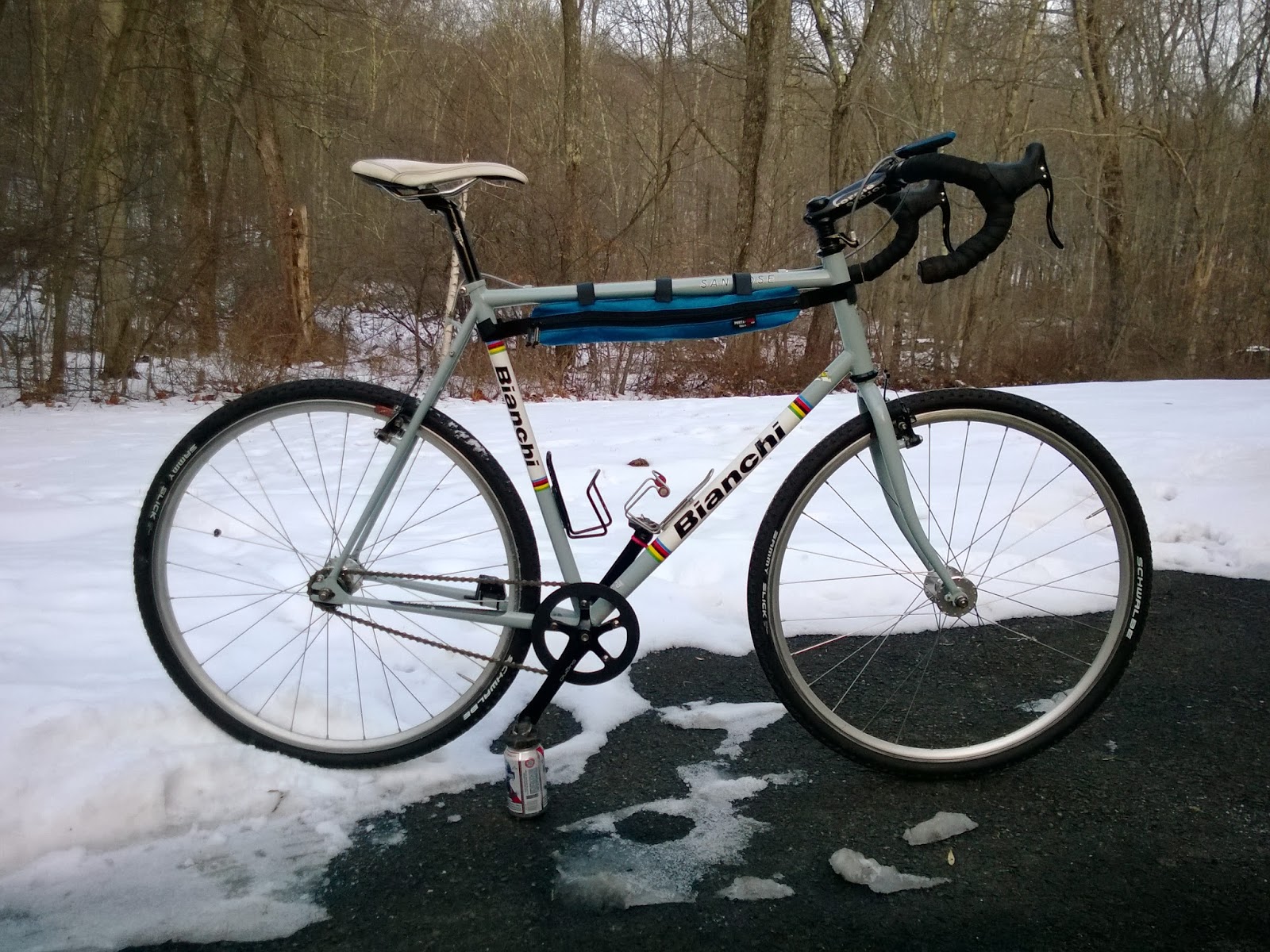