Showing some skin in December!

Taking advantage of another 50+ degree day I headed out on the Raleigh to try out the new cockpit.  The first thing I notice was my Garmin was at a weird angle but a good angle for that matter.  Bars felt solid, too.  So I took off for a quick workout ride.  I was feeling a little stiff after yesterday's workout at the office gym.  What I thought was going to be just a normal spin class turned into a lot more that I was prepared for but I was able to hang, just paying for it today. 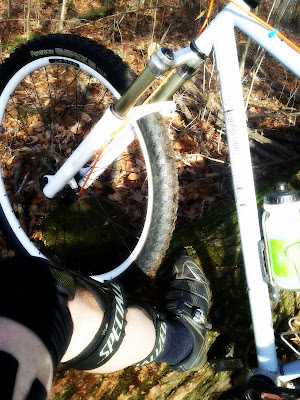 Riding up the to the Gussy trail got me thinking that I need more to ride now that SSAP is back on again so now it's time to start training for the event.  This past year I have added more road riding into my regimine but I think I need to start adding some single speed road miles, too.  Riding the Raleigh, despite the weight, keeps getting better and better.  The bottom bracket issues have been resolved and the bike feels really tight. 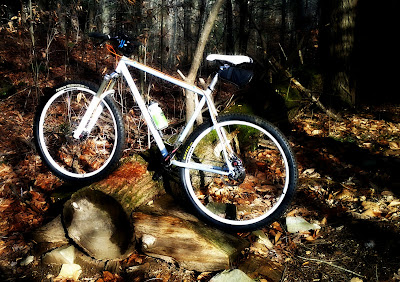 Although shotgun season is over, hunting is not over at Upper Paugussett State Forest because it's now muzzle loader season!  Yippee!  And then Bow Season opens up again, when this is over.  There was a truck parked on Sanford Road so I had to surmise someone was hunting along the blue trail and then I saw the Hunter Dumper's van at the Echo Valley lot and John, as I came to learn his name today because he was standing as still as a scarecrow on the blue trail about 20 yards in from where it crosses the Gussy on the right of way, normally hunts along the Gussy.  Good thing I am wearing Orange and other bright colors, and I have my bear bell! 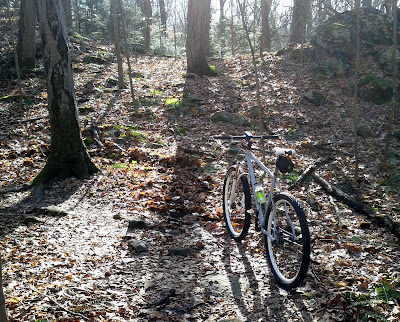 This one corner has been bugging me lately and it's largely due to the fact that the turn is really abrupt so I thought I would widen it a bit and have it go around the outside of the tree instead of on the inside.  I foot raked the path but next time I come back in I will make it pretty and probably bench it some.

For awhile now I have considered myself a dirt purist and trying keep the knobbies only in the dirt. Road riding to the trail head is a necessary evil but now I changing that mindset.  On today's ride I threw in a little road action by climbing up Butterfield Road (yes, there is a Strava Segment here).  I am not sure how accurate Strava is when it's showing the % grade but it has one section at 41%, on average, however, the first section seems to be an 18% grade and the second section is 16%.  While I my HR never hit the red zone in the woods it did on this climb!
at 6:30 AM

damn you getting out so much in the nice weather!!!!!!!! I need to ride this area your always at, obviously going to be hard to get to that neck of the woods but looks fun

Upper Paugussett lies on the other side of the road that I live on so it's so easy to just hop on the bike and get a good 6 mile ride in at the drop of a hat.

I also built a few trails in there so I like to keep the trail gnomes in check while continually tweaking the main trail.