Another awesome ride on the Kona with one exception. My rear tire sucks! I had (since replaced with an Ignitor) a CrossMark on the rear and I got no traction on anything soft or wet. These tires are going back to dirt road duty, that's for sure because that seems to be what they are best at.  I tried to make the best of the ride.  This section of the Mulikin, however, now needs some serious armoring.  I hope the trail gnomes find the rock store further up the Mulikin and drag down some flatties and armor this we area. 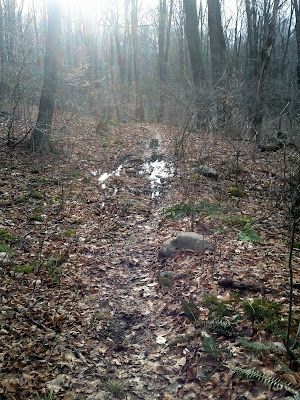 Before hitting the climb on the Mulikin I pondered an old trail that I used to ride before the Gussy was built.  Walking it a few weeks ago while Geocaching in the woods I thought that it might make a good alternative to what you currently have to ride on Al's Trail to get to the start of the Mulikin.  I quickly dispelled that notion when I remembered the truck parked along Hanover as I rode by - there was a hunter in these woods.  Still, perhaps some future Sunday I may give it a shot. 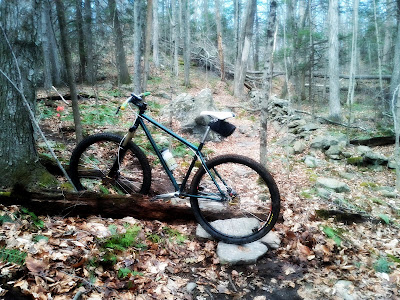 I rode up most of the Mulikin but couldn't get much traction is some parts so I did some chain saving.  The ride down the Gussy was a blast, cleaning most of the obstacles and contemplating new ones, as well. 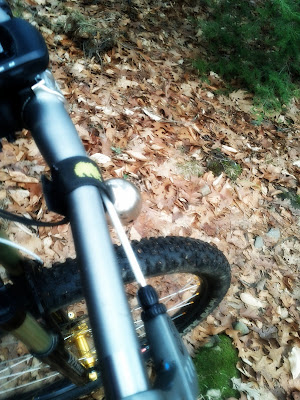 Riding in orange and jingling my way down the trail I found that I am really enjoying the bike and really love the tight, compact frame of the 19" Kona.  The 110mm White Brothers fork changes the geometry considerably but thinking about it further I think it helps compensate for the smaller frame.  It slackens it out so much that the bike just glides through the tech and climbs surprisingly well, too. 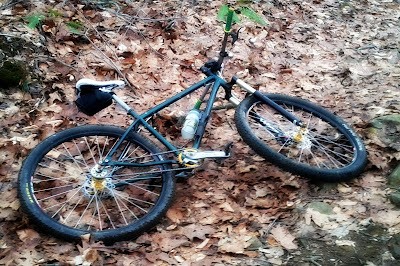 So that this ride didn't turn into another Second Sled Dog ride I rode the Yellow trail coming off the Gussy after looping around again on the Poly Brody (got to get those extra miles) and discovered something interesting.  Apparently, someone has extended the While trail into this part of the forest cooping the Yellow trail. 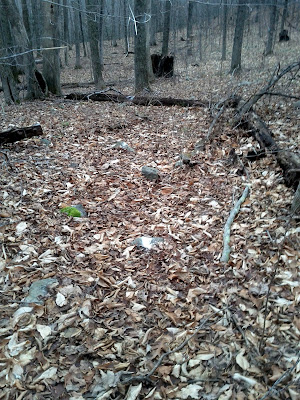 Who ever did this spray painted blazes.  WTF?  I have been riding this section of trail for years, granted I miss the trail from time to time, as I did on this ride, but there is no reason to do this, especially without permission from the state.  However, it will be interesting to follow the white trail all the way down to Pond Brook sometime. Something I have never done yet largely because I really don't like riding Al's Tail.  Too many injuries from that trail make me avoid it. 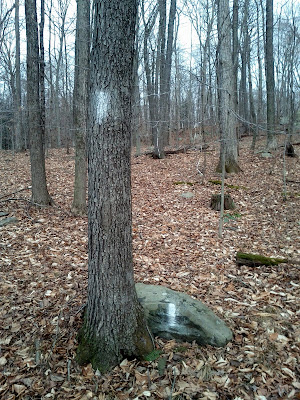 I followed the White trail down to the intersection with the Mulikin and then ventured down another old game trail that I used to ride that also connected to the old trail that I was talking about earlier in this post when I remembered the hunter.  The is a cool rock poised at the right angle that I started calling Flight Simulator back in the day.  I am sure you can guess what that means.  Remembering the hunter I bailed and headed back to the Poly Brody and discovered another strip of pink engineer tape.  I think this is from a hunter marking locations for deer.