I finished rebuilding the Kona Saturday night the first thing I noticed was how slack the White Brothers Fluid 29 makes the bike.  That has to be due to the fact that it's 110mm but it's interesting to see the three bikes above and their top tube angles, starting from Right to Left, the Kona is a 19" fame, the Spot Long Board 9 is a 20" frame, and the Raleigh is 21" frame.  My plan is to ride the Kona pretty hard for the next month using the WB fork and then try the Manitou Minute on the Kona as well and then figure out which one like best. 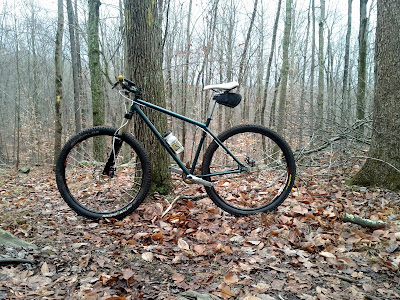 I wanted to go on a longer ride today but couldn't wait to get out on the Kona so I thought I would make the best of yet another local ride at Upper Paugussett.  I have been riding at Upper Paugussett quite a bit and I think it's starting to look like the view of the second sled dog again.  Anyway, started out with the usual lead in with a warm up on the Poly Brody.  With the WB at it's prime settings the first thing that I noticed was that it didn't ride as mushy as some other forks that I have been riding, in fact it was a little stiff.  That stiff feeling was actually really good when it came to climbing.  The lack of bar ends combined with the ultra wide bars made climbing really different. 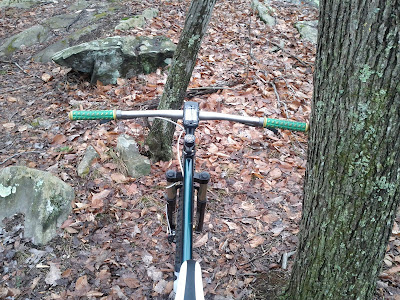 On top of that, different gearing and a longer stem also changed things up quite a bit.  My first propensity was to come out of the saddle to climb and I got a lot of power that way but on the second time around, I stayed in the saddle and powered right up the hill.  The WB fork really came into it's own through all the technical sections on the Gussy and I found the wider bars to really help as well.  It looks like I finally found the right fork for the Schwalbe Racking Ralph, too.  Fits perfectly and not once did  front tire works perfectly with this fork and of course it's tubeless making the front end light and very maneuverable. 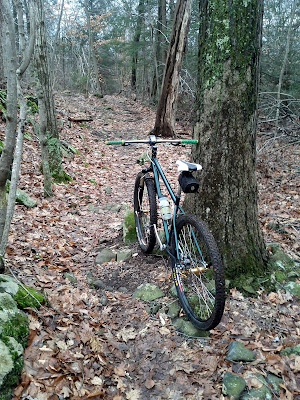 With an hour down and another kill I decided to head out on Al's Trail over towards the Vineyard when I ran across this bike propped up against this log.  It was in the parking lot a few months back but seems to have migrated closer to the water.  I was actually thinking about rebuilding it for the neighbor's son but when it was gone I thought the state came and got it.  Looks like not.  Further down Al's trail nearing the parking lot I realized that I really hate this trail and then I wiped out on a wet root which further confirmed my distaste this section of the trail.  Don't get me wrong, past the dam it's a pretty good trail but this section of the trail is basically just a bucket fisherman path. 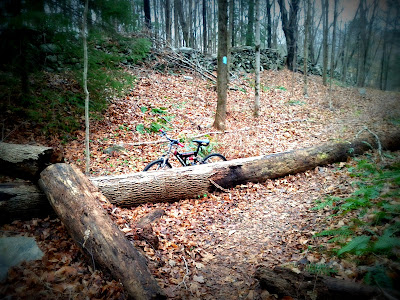 By the time I got to the end of Valley Field my give-a-shit meter was pegged so I headed back to the forest for another lap on the Body and exit out through the Mulikin.  Along the way I found that Michelob Light can I found last week and through it in my back pouch!  Another 5 cents for the beer fund!  As I mentioned earlier, I powered up the hill this time seated and was amazed at how smooth it was. 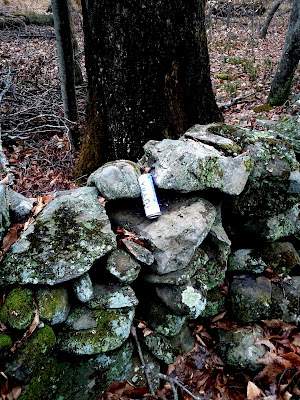 Rolling down the Mulikin and the bike was really taking to the trail nicely when all of a sudden I came across a couple walking their dog down the trail.  That was a first!  I have never seen walkers (doggers) on this trail before.  Further down the trail I found the second stream crossing to be exceptionally muddy.  It's about time the trail gnomes (hint, hint) do some armoring on this before it gets too worse. 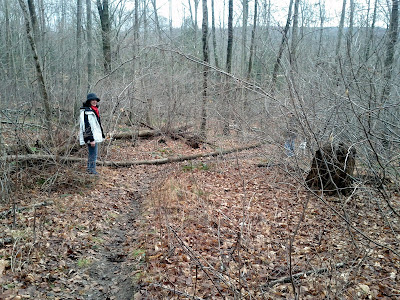 Riding home I met up with a guy named Rick riding a sweet Giant XTC 29er purchased from Shawn at the Bicycle Center.  Rick said he just found the Gussy Trail and thought that it was really great.  I told him to contact me next time for a full bore tour of the forest and I would keep him in the loop for any planned trail maintenance.  I think I am keeping the Kona!