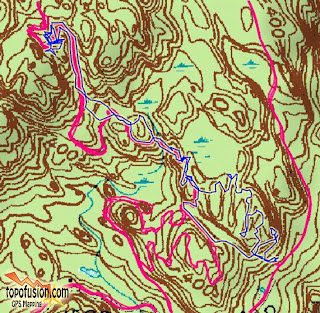 Last Sunday I went out to do some work on the Upper Gussy Trail.  Since I seldom walk in the forest I took the opportunity to explore what I call the Knuckles, or these five outcroppings you can see from the Gussy in the winter time.  I found a few disconnected trails and old skidder paths that once connected could make a nice route down to the Echo Valley Parking lot.  This would be nice because then you would never have to leave the State Forest to ride the Gussy. 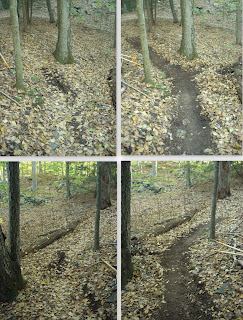 The Gussy seems to be getting a lot of traffic these days and some weak spots are starting to crop up.  The grade reversal on the switch back (between stream crossings and the wetspot) was starting to get mushy and it looked like it needed a little benching and a nick to let water flow out.  It took 20 minutes to clean it up. 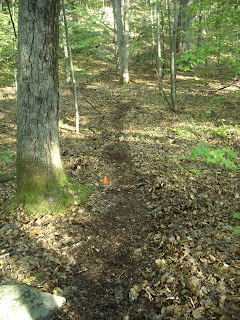 The main intent of the day was to add an alternative route to the Fall Line climb further up the trail.  Eventually this might even work itself into another reroute with the really interesting terrain a little further south of where this ends.  This terrain is almost like a pump track and to run a trail through it will be awesome. 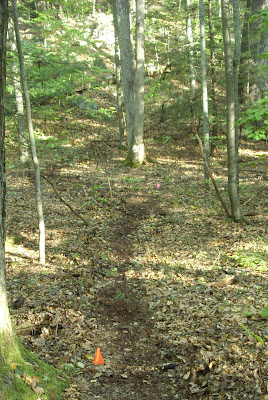 The new route does go through a low area that I might want to eventually need a boardwalk to get through.  We'll see after the section gets some use and see what happens.  The other alternative would be a big armoring project.  There is a good nearby Rock Store with many flat rocks at bargain basement prices that could be used to make a really nice "Yellow Brick" road through here.  I would rather armor than use a board walk because the wood needs to get replaced and armoring makes it more challenging. 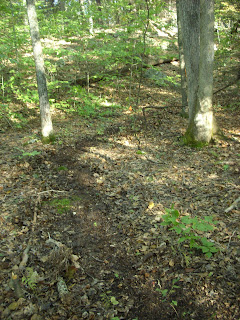 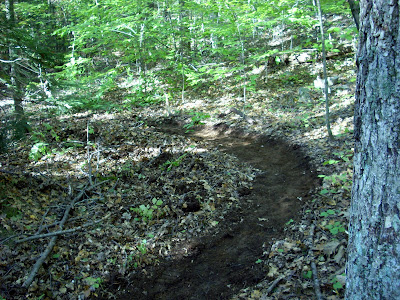 The other side of the low area I benched a nice flowy turn with a log over to check your speed if you riding this in the other direction which sets up for the downhill part.  Granted, the intended direction is for the rider to climb up through here and not go down it but I am sure once people find it they will ride it both directions. 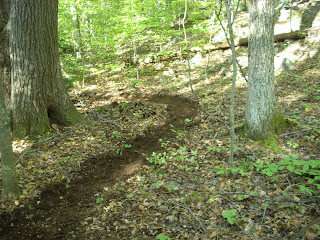 There is a nice shallow ascent/descent in which I got about half of it benched.  I put in a few grade reversals for drainage, too. 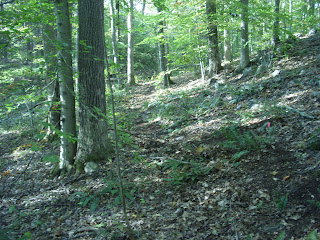 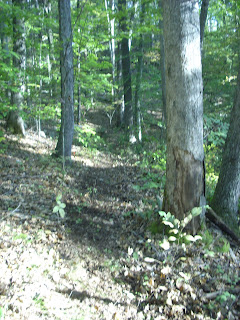 While benching one particular spot I unearthed the largest grub that I have ever seen.  Now this would be worth trying, and yes I mean eating, that is if I was lost in the woods and starving.  It was so juicy looking.  Good thing I already ate a granola bar. 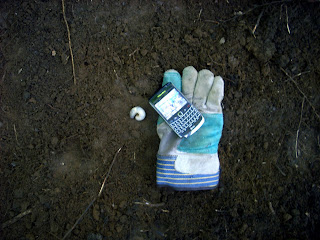 I am going to finish up benching Sunday morning (early, 7 AM).  I think it will be faster to come in from the Pond Brook boat ramp because we can go up to the forest road and then take the blue trail and basically come in the back way.  Talk about fall line climbs/descents, that blue trail has a doozy and because people still ride it (I don't bother) it keeps getting worse and worse.  If blue trail ever get's opened to riding, which it should be because it's on state land and I pay taxes, the first thing I would do is re-route this section of the trail and probably get an extra mile or two in the effort. 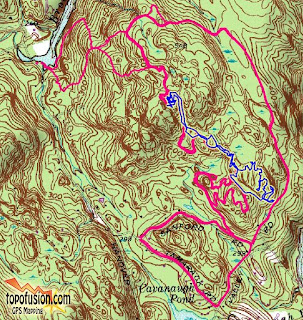